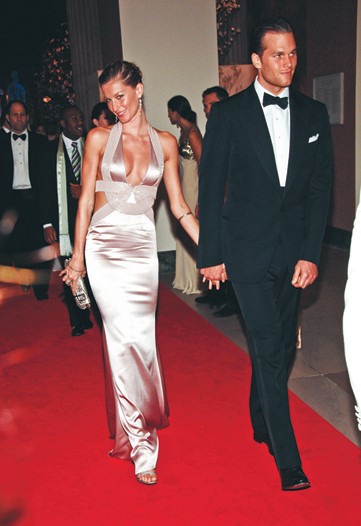 Models misbehaving? Athletes acting up? Hardly a new notion (see Evelyn Nesbit and the Black Sox). But seldom have such high-profile antics converged in one couple’s mutual faux pas. By now you’ve no doubt heard about Gisele and Tom’s “Shotgun Wedding,” as the New York Post called their Costa Rican vow-renewal on Sunday. (Whether the event was scheduled for the sake of guests absent the first time around or merely for the fiduciary opportunity to sell exclusive photos is unclear.) No, the Bradys weren’t the ones firing the shots, but the two heretofore known for impossible aesthetic perfection — and for good manners — are fast seeing their commingled wattage dim. So what better time than this particular moment in pop culture cross-referencing to look back on the singular bad behavior of some of Gisele’s and Tom’s infamous colleagues?

After all, Naomi Campbell could be called the grande dame of model scandal>>

Naomi Campbell: The grande dame of model scandal, Campbell has a rap sheet longer than her famous gams. After hurling her jewel-encrusted cell phone at a housekeeper in 2006, Campbell was supposedly reformed by a community-service stint. Alas, last year she was arrested again at Heathrow on suspicion of assaulting a police officer over a piece of lost luggage. Now she’s banned from British Airways for life.

But even Kate Moss gets overheated>>

Kate Moss: Fashion’s original waif got caught on a cell-phone camera sniffing a suspicious substance in 2005. Within days, and despite rushing into rehab, she was dropped by a number of high-profile clients, some of whom, including Chanel and Burberry, rehired her. More recently — last week — Kate was on best, if mute, behavior during a series of Topshop festivities in New York, until finally they got the better of her. Obviously fed up with the photo ops, on Thursday night she shouted at a photographer to “Give me a f—ing moment!”

Linda Evangelista: Cubicle-dwellers everywhere took note in 1990 when Evangelista summed up the working habits of the supermodel set to Vogue’s Jonathan Van Meter in one not-so-humble phrase: “We don’t wake up for less than $10,000 a day.”

Lauren Hutton talks herself into trouble >>

Evelyn Nesbit: A long-ago troublemaking temptress, artist’s model and chorus girl, Nesbit served as a star witness in 1906 at the trial of her husband, Harry Thaw, for the murder of her former lover, Stanford White. Her appearance made her a tabloid “It” girl, a status, alas, she couldn’t hold on to forever, and she faded into obscurity.

Lauren Hutton: During an appearance on the “Today” show last year, Hutton, know since her heyday as outspoken and opinionated, weighed in on the depiction of women in “Sex and the City.” “It’s written by guys, who happen to be gay, who are sluts. That’s what I think,” she said, thereby alienating a sizable share of her fashion-industry colleagues.

Carla Bruni proves open-minded about matters of the heart>>

Carla Bruni: Before she became First Lady of France, Carla Bruni was plenty adventurous in matters of love. At one point, she struck up an affair with Raphael Enthoven, then married to Justine Lévy, the daughter of Bernard-Henri Lévy. Bruni and Enthoven have a son together, and Bruni has waved off rumors that she was at one point involved with Enthoven’s father. And, oh yes: On the eve of her first official state visit with President Nicholas Sarkozy to Britain, a nude photo of Bruni was auctioned at Christie’s for a cool $91,000.

Stephanie Seymour: Axl Rose said fiancée Seymour assaulted him during a 1992 Christmas party. She said he assaulted her and that they had never even been engaged. Seventeen years later, the two have only a “November Rain” video to commemorate their love.

The Black Sox: They were the Chicago White Sox until several members of the 1919 World Series-bound team, including Arnold Gandil, Eddie Cicotte, Oscar Felsch, “Shoeless” Joe Jackson, Fred McMullin, George “Buck” Weaver, Charles Risberg and Claude “Lefty” Williams, conspired to throw the Series. They were all subsequently banned from baseball.

Charles Barkley: Barkley ended 2008 with a bang — almost. The former NBA star was pulled over on New Year’s Eve after blowing a stop sign in Scottsdale, Ariz., and charged with a DUI. His stated excuse: He was rushing to receive oral sex from his female passenger. He also asked the arresting officer “to admit she was hot.”

Pete Rose: Rose found himself banned from baseball (including the Hall of Fame, for which he was a shoo-in) for betting on his own team while managing the Cincinnati Reds.

Mike Tyson: Among the former heavyweight champ and facial-tattoo fan’s offenses were threatening to eat Lennox Lewis’ children, taking a bite out of Evander Holyfield’s ear and, most seriously, raping a 19-year-old woman, for which he served three years in prison.

Michael Vick: Even before his dog-fighting exploits, the former Atlanta Falcons star quarterback behaved badly enough to inspire the “Really?” segment of SNL’s Weekend Update. After his July 2007 arrest and conviction for running “Bad Newz Kennels” out of his 15-acre property in Surry County, Va., he was sentenced to 23-months in federal prison and will be released two months early to home confinement in May.

Plaxico Burress: During an evening of bad ideas — not to mention bad fashion — the Giants wide receiver shot himself in the thigh with his unregistered Glock concealed in the waistband of the sweatpants he wore on a sojourn to the New York club Latin Quarter. Last week, Burress got a pink slip from the Giants, making him a free agent. He’s currently facing two counts of second-degree criminal possession of a weapon, with a court hearing set for June 15.

Michael Phelps: The 16-time Olympic medalist swam out of line when he was photographed at a party smoking out of a bong. He subsequently was suspended from competition for three months and lost his deal with Kellogg’s.

Read it again! Click to return to the beginning of the slideshow>>