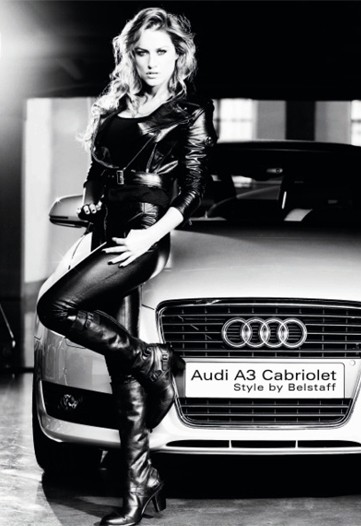 MILAN — The less-than-rosy times aren’t stopping a few fashion brands — Belstaff, Façonnable and Trussardi among them — from devising expansion projects that range from designing a new Audi to opening stores.

“I think that companies that take a defensive approach during a crisis risk more than the ones that attack with intelligence,” noted Alberto Lavia, chief executive officer at Façonnable, during his first interview since joining the company in September.

To fete its 85th anniversary, Belstaff is boosting brand awareness and investing to create a lifestyle brand. The high-end sportswear company known for its edgy biker-chic clothing teamed with Audi to create the limited series A3 Cabriolet Style by Belstaff that is already on sale.

The ice gray model sports a black top and metal roll bars and handles, while the black stitched silver napa interior features black patent insets. Starting with the fall season, Belstaff introduced Icon Collection, an eveningwear portion of the brand’s ready-to-wear aimed at the red carpet. Infused with a tough edge, the mostly black gowns are made of cotton jersey and leather combinations, splashed with zippers and mesh inserts.

According to Belstaff chief executive Manuele Malenotti, Nicole Kidman, Hilary Swank, Naomi Watts and Elle Macpherson are among the celebrities whose stylists have called in the dresses for the Cannes Film Festival in May, where Belstaff will host a cocktail party to fete the film “Inglorious Bastards.” In the movie, Brad Pitt dons Belstaff jackets, which also appear in “Terminator Salvation,” the latest Harry Potter movie, “Amelia” and “Public Enemy.”

Belstaff’s revenues rose 10 percent last year to 100 million euros, or $133.2 million at current exchange, and in the U.S., fall-winter 2009 sales climbed 30 percent, according to Malenotti.

To further fuel the growth, Belstaff in January inaugurated a 10,800-square-foot showroom in New York that will serve as its U.S. base. In the same period, the firm launched an e-commerce Web site that is seeing strong sales in the U.S. especially, said Malenotti.

Belstaff also inked a watch license with Lorenz and signed on with Como-based Canepa for underwear.

Malenotti describes the Swiss made, automatic timepieces as “traditional yet innovative” styles made with steel and titanium and priced at 500 euros to 1,500 euros, or $666 to $1,998.

In the works are limited edition models in gold and diamonds. All the watches will roll out to stores starting in September.

Pietro Bolletta, chief executive officer of Lorenz, expects to sell between 15,000 to 20,000 pieces annually and mapped out a select distribution of 200 sales points in Italy and 800 units in Europe, including the former Eastern Bloc countries. The U.S. market will be tackled next year.

The underwear line, initially launched for men, is made up of cotton jersey ribbed tanks, T-shirts and briefs in cream, white and pearl gray. A women’s collection will debut in September.

Meanwhile, Belstaff continues to expand its own retail, with store openings in Prague, Bucharest and Barcelona scheduled to take place over the next five months.

Retail expansion is also on the minds of Façonnable and Trussardi.

High-end sportswear brand Façonnable is ready to spread its wings after Lavia’s arrival from Kenzo. The new ceo’s number-one move was putting in place a management team that includes creative director Eric Wright, formerly at Roberto Cavalli; Jean-Emmanuel Bourguer, a veteran of LVMH Moët Hennessy Louis Vuitton who was appointed vice director for wholesale and retail, and Patrizia De Santis, who was tapped from Bulgari to be financial and administrative director. Bob Green was named president of North America in November. “I’m very optimistic and now that we have a good team, we have no more excuses — we are good to go,” said Lavia.

Façonnable, which Lavia says has an “Anglo-Mediterranean” spirit and carefree vibe, is headquartered between Nice and Monte Carlo. It was purchased for $210 million in 2007 by M1 Group, a diversified family-owned company based in Beirut, Lebanon. M1 acquired the brand, founded in the Fifties by Jean Goldberg, from Nordstrom, which took over in 2000 and started selling the collections exclusively in its store.

Lavia wants to maintain the profitable relationship with the department store but at the same time open three directly owned stores in San Francisco, Atlanta and Coral Bay in the Virgin Islands between July and September.

Over the next five years, Lavia hopes to double the number of its 40 directly operated stores and boost multibrand units from 550 to 850. Current estimated sales of 200 million euros, or $266 million at current exchange, are also expected to double over the same time frame.

Another priority is to redistribute market share, now dominated by the U.S. and France, which generate 70 percent of revenues. New markets on the radar include Lebanon and elsewhere in the Middle East, South Korea, Belgium, Spain and Germany.

In May, Façonnable will introduce a cruise line, followed by precollections.

The openings of a Tru Trussardi store in Venice near the Rialto Bridge and its second unit in Paris in Saint Germain-des-Près have grown the brand’s store count to 118.

Tru Trussardi is Trussardi’s bridge line, designed by an in-house team and priced 40 to 50 percent below the Trussardi 1911 main line. The urbanwear line was launched in 2006 and counts 400 sales points worldwide.

In line with other Tru Trussardi stores, the contemporary decor of the Venice store features shiny wengè- and black-lacquered wood in contrast to the white walls. Golden trunks, steel fixtures and glass cases temper the starkness. Both outposts will also house the Trussardi Jeans collection.

During the Salone del Mobile at the end of the month, Trussardi will launch a furniture line designed by Milan Vukmirovic.