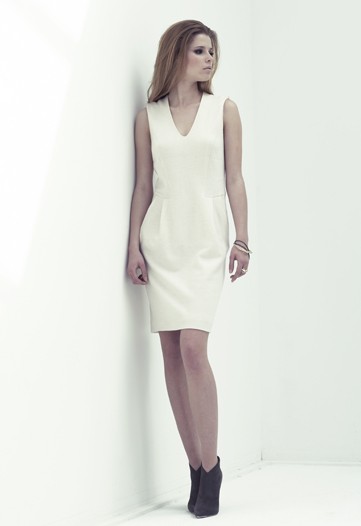 MATCHES BRANCHES OUT WITH FREDA: Tom and Ruth Chapman, who own the Matches chain of boutiques in London, are getting ready to share the store’s own label line, Freda, with the world. The duo is preparing to wholesale the Freda collection, a line of chic wardrobe staples, which launched in 2005, in Paris for the spring 2010 season. “We’d always had the idea [to wholesale the collection] but didn’t want to until everything was right,” said Ruth. “Now it’s the best-selling collection in our own stores.”

Chapman said she would target “10 to 15 key international stores,” for Freda’s wholesale launch. “As retailers we want to keep [the collection] niche,” she added.

YOUTH QUAKE: Jean-Charles de Castelbajac is hoping to capture the street-savvy teen market for spring with the launch of a diffusion line called JCDC. The line will include pieces such as T-shirts, skirts and jackets emblazoned with the designer’s signature kooky designs — one T-shirt features an image of Donald Duck, while a skirt is made from a fabric in a newspaper print. Prices for the line start at 60 euros, or $86, for a T-shirt and run to 230 euros, or $329, for a military style red-and-blue jacket with gold buttons. A spokeswoman for the designer said the line is unrelated to the collaboration de Castelbajac launched in 2007 with Lee Cooper denim, which she said has since ended. The collection will launch with a presentation held in London on Sept. 17, ahead of London Fashion Week, while a presentation in Paris will be held Sept. 23. And in a bid to find real-life hipsters rather than hired models to appear in the shows, the label has teamed up with Dazed and Confused magazine in London and Jalouse magazine in Paris to scout for unknowns, who can apply through the magazines’ Web sites for a chance to appear in the presentations.

AMFAR IN MILAN: AmfAR will hold an event in Milan for the first time, on Sept. 28 during Fashion Week. Janet Jackson will chair the event at Milan’s La Permanente space, which will include a black-tie dinner, dancing to tunes mixed by DJ Bob Sinclar, a live auction and a performance by Dita Von Teese. Other co-chairs will include Dsquared’s Dean and Dan Caten, Asia Argento, Roberto Bolle and Lapo Elkann.

“We are profoundly grateful to Janet Jackson for joining amfAR as a chair of its first event in Milan,” said Kevin Frost, amfAR’s chief executive officer.

While coming to Milan was a natural step since Italian fashion designers have been very supportive of amfAR, the organization has in the past held a total of six events in Venice and Rome, which raised $5 million.

According to police, the gang approached the boutique on three motorcycles at around 11 a.m. Wednesday morning, and used a sledgehammer to smash the boutiques’ doors and display cabinets, leaving the scene within a minute. No arrests have yet been made.

A spokesman said Monday police do not believe there is any connection between the robbery and the $65 million raid on Graff’s New Bond Street boutique earlier this month. Three men who have been charged in connection with the Graff robbery are currently in police custody, and are due to appear before Kingston Crown Court Sept. 1.

DESIGNER STREET: A seafront promenade in the northern French town of Benerville-sur-Mer has been dedicated to Yves Saint Laurent, who used to own a property in the area. This the second time a town in France pays homage to the late couturier, who already has a square named after him in the seaside resort of Deauville. Meanwhile, the Pierre Bergé-Yves Saint Laurent Foundation is readying a retrospective on Art Deco interior decorator Jean-Michel Frank, whose simple, yet sumptuous furniture and objects were collected by the designer and Bergé. The exhibition will run from Oct. 2 to Jan. 3.