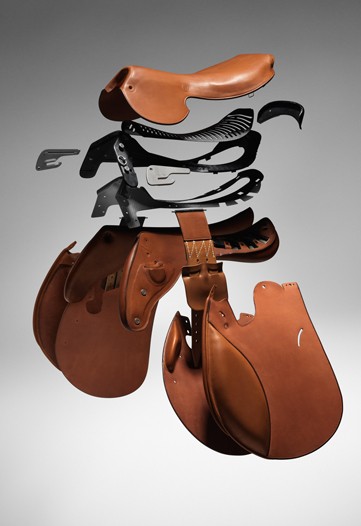 SADDLE UP: Hermès just propelled the horse saddle into the 21st century. The luxury firm, which is hosting the Saut Hermès international show-jumping event this weekend, on Tuesday unveiled a high-tech modular saddle featuring a tree made of carbon and injected thermoplastic. “This is at the heart of the essence of Hermès, which is about marrying tradition and innovation,” said Hermès artistic director Pierre-Alexis Dumas.

Lighter and finer than conventional saddles, which use underframes made of wood and steel, the Talaris saddle takes the strain off the horse and the rider’s backs, said Laurent Goblet, the master saddler who came up with the design. “Saddles had not evolved with the times like other sports equipment such as skis and tennis rackets,” said Goblet. “We had to reinvent the craft.” The saddle will retail for 6,750 euros, or $9,100 at current exchange.

NO LONGER A SWEET PEACH: Michelle Mone, founder of the British lingerie label Miss Ultimo, may think twice before taking her teenage daughter’s advice on suitable brand ambassadors. Mone this week dumped Peaches Geldof as the face of the brand, aimed at 16- to 25-year-olds, after topless pictures of Geldof appeared on the Internet along with allegations of drug use. According to a statement from MJM International, the company behind Miss Ultimo, Geldof’s contract as the “face and body” of the brand has been terminated. Geldof had been working with Miss Ultimo since May, and her images are currently being removed from the brand’s Web site and Debenhams department stores. “Miss Ultimo is a brand geared towards a young female audience and as a company we have a social responsibility to ensure we are promoting only positive role models that young women can aspire to,” the firm said.


NO SALE FOR HARRODS: Harrods has scotched rumors that it is for sale. “We have been aware of gossip circulating over a possible sale, and we took the decision to reassure staff this morning that this was not the case via a storewide announcement,” said Katharine Witty, a Harrods spokeswoman. “We are happy to confirm that Harrods is not for sale and is not being sold.” On Tuesday, Sky News online had reported that Harrods owner Mohamed Al Fayed had received an unsolicited bid for the company from a Qatar-based investor, citing sources. Al Fayed bought the Knightsbridge store in 1985, when it was part of the House of Fraser store group, for 615 million pounds, or $927 million at current exchange.


AMIES MEN’S MODEL: Hardy Amies plans to concentrate on its men’s wear business for the next few seasons, but it isn’t about to abandon women’s wear completely. While the British press was quick to state the end could be nigh for the firm’s women’s couture business, a spokesman confirmed clients could still commission gowns. The label, whose late founder was the couturier to Queen Elizabeth II, went into administration in October 2008 and was acquired by Fung Capital the following month for an undisclosed sum. Hardy Amies reopened its Savile Row doors in November after a yearlong refurbishment. A retrospective currently staged at the store, dubbed “A Century of Couture,” spotlights archive treasures including sketches of the Queen and costumes from Stanley Kubrick’s “2001: A Space Odyssey.” The exhibit, which opened in November, is by appointment only. The label’s design director, Oliver J. Benjamin, showed his first ready-to-wear collection for the label at London Fashion Week’s men’s wear day in February.

TURKEY TIME: Turkish designer Ece Ege of Dice Kayek installed her second black-label, made-to-order collection at Les Arts Décoratifs in Paris on Tuesday. The collection of 25 dresses also will be presented at the Museum of Modern Art in Istanbul at the end of August. “We are also planning to do a book on the exhibition,” said Ege. Istanbul, designated 2010 capital of culture, inspires Ege, who fused the richness of the Orient with a modern twist in her designs. “It’s like a locomotive,” she said of Turkey’s burgeoning fashion scene, led by a new wave of Turkish designers, such as Hakaan and Arzu Kaprol. “The Turkish government is really contributing and investing in textiles,” continued Ege, who is also creative director at Turkish-based brand Machka. Meanwhile, Kaprol has found a fan in actress Meg Ryan, who, on a visit to Turkey during its fashion week, stopped by the designer’s showroom and did an impromptu photo shoot.

TOKYO TIME: Escada, which entered insolvency last year, decided it was time to send a clear message to Japanese consumers that its business is back on track after last year’s cash injection by the Mittal family. Escada chief executive officer Bruno Sälzer and Megha Mittal, the daughter-in-law of Indian steel billionaire Lakshmi Mittal, cohosted a fashion show recapping the house’s spring collection at Tokyo’s Mitsukoshi department store on Monday. The event, which closed with Ai Tominaga in a billowing aqua gown, came just weeks after the brand opened two stores inside the department store — one for its main line and a second for the lower-price Escada Sport collection. Earlier this month, the company also opened an Escada Sport collection at the retailer’s Nagoya branch. Sälzer said the new Tokyo stores got off to an “extremely good start” and he thinks the company will open as many as 10 more Escada Sport stores in Japan over the next two years. “This year, 2010, the overall market in Japan will still go down, [but] I think we’ll still be up between five and 10 percent,” he said, adding he expects the company’s global sales to be close to flat this year.

SPENCER JEWELS ON THE BLOCK: A selection of treasures from Althorp, the ancestral estate of the Spencer family where Princess Diana spent part of her youth and where she is buried, will be sold in three separate auctions this summer at Christie’s. The sale will include a painting by Peter Paul Rubens, “A Commander Being Armed for Battle,” and one by Giovanni Francesco Barbieri, aka Il Guercino, called “King David.” Together, they are expected to raise about 20 million pounds, or $30 million at current exchange. Other items include porcelain, works of art and English and French furniture from Althorp and the grand, neoclassical Spencer House in London, which is still owned by the family and leased to Lord Rothschild. A collection of more than 12 aristocratic, 19th-century horse-drawn family carriages also will be sold. The first two auctions will take place July 6 and 8, and a date has yet to be fixed for the third auction.

MAS TAPS TENG: Yeohlee Teng has a new gig as a board member of the Municipal Art Society, a nonprofit rooted in sustainable urban development and livability in New York City. For some time, the designer has been heavily involved in the Garment District’s rezoning, a matter in which MAS is now involved. MAS president Vin Cipolla said, “Through her work as an activist in the Garment District, she has a proven dedication to her city and her community. She brings savvy, fresh ideas and tremendous energy to MAS.”