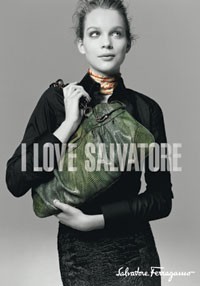 MILAN — It’s not quite a cartoon bubble, but there is no doubt what the model in the latest Salvatore Ferragamo ad campaign is thinking with the “I love Salvatore” tag line running across the page just below her face.

The company will invest $14.4 million, or 12 million euros at current exchange rates, in the fall-winter 2005 campaign, with a significant increase in the U.S. and Japan, Herve Martin, product general manager of Ferragamo, said during a news conference held Monday at Armando Testa headquarters here to present the campaign — a first for Ferragamo.

“We plan to increase our budget for 2006 even more, and double investments in the U.S. in the short, medium-range,” he said.

“I’d call it an evolution, rather than a break with the past,” Martin said of the ads. “We were not merely looking for beautiful photos. This is a joyful message that reaches out to the founder of the company, a man who did so much and whose products still give pleasure. Just as we renovated our product going back to the archives and the history of the brand, this is a way to reaffirm our ties with the past and with Salvatore Ferragamo.”

The company wanted to define its own visual and graphic identity with a sense of irony. “This is the starting point for us and there are many possibilities for the future, evolving from this concept,” Martin said.

Ferruccio Ferragamo, chief executive officer, said this “was the moment to communicate in a different way,” adding, “We are proud of our roots and of the quality of our product.” Ferragamo said the new concept reflects the brand’s “aesthetic codes of color, shape, volume and proportion with a new and contemporary language.”

The campaign focuses on accessories, the company’s core business, which accounts for 66 percent of sales. Red patent pumps, a green lizard Gancio bag or a honey-colored Astrakhan bag vividly stand out worn by model Kim Noorda, who appears in black and white. The photos were shot by Nicolas Moore. Boris Kolesnikov was photographed for the men’s campaign.

“The youth of the model comes through her body language, her fresh and modern spirit — it’s not only about her age,” Joyce said. “We want to speak to young people, too, but style is not connected to age.”

The ads often run over single consecutive pages, and the brand logo appears only on the last page.

“We play with the slogan,” said Joyce, who set up her own company in March, Joyce Image Consulting, after leaving Gucci. “It was extremely rewarding to help guide the spirit of the Ferragamo brand into a spontaneous and modern direction while simultaneously preserving and valuing its heritage.”

Martin said he plans to use a wider selection of media. “We will have outside billboards at bus stops and in phone kiosks in New York by the end of the year.”