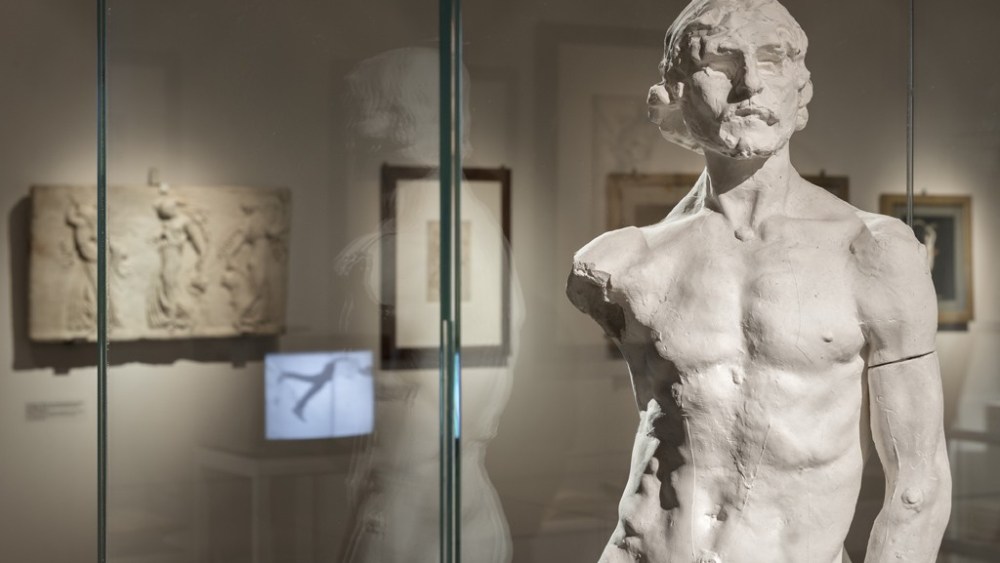 FLORENCE — The Museo Salvatore Ferragamo on Wednesday launched its new exhibit “Equilibrium” — a multipronged exploration of the structural, scientific, artistic and cultural importance of the foot for keeping body’s equilibrium in motion, starting from Salvatore Ferragamo’s obsessive, lifelong research to design the perfect shoe.

Ferragamo devoted much of his life and work to the anatomical study of the foot — particularly the plantar arch — and how it bears the weight of our bodies as we stand or walk.

“It was the foundation of my husband’s work,” said Wanda Ferragamo, widow of the founder of the Florentine fashion house, during a press conference at its headquarters in Palazzo Spini Feroni.

Ferragamo added that understanding the body’s equilibrium was critical to “maintain the solidity of the shoe and the well-being of the foot.”

Works have been drawn from major museums such as the State Hermitage Museum in Saint Petersburg, Russia; the Uffizi Gallery in Florence, and the Musée d’Orsay and Musée Rodin in Paris.

Contemporary art, including videos by Bill Viola and Marina Abramovic, are also displayed alongside ancient bronze and marble sculptures of feet and dancing figures — including iconic portraits of modern dance founder Martha Graham.

A video of interviews with renowned figures such as French high-wire artist Philippe Petit, Italian mountaineer Reinhold Messner and English writer Will Self speaks to the show’s underlying concepts.

“This was extremely challenging, and we are extremely proud” of the scope the exhibit, said the museum’s curator Stefania Ricci, who worked on the exhibit with Sergio Risaliti.

Risaliti said the pieces in the exhibit touch a deep spiritual chord in the history of art and the evolution of humanity, since bipedalism is the “fundamental link” distinguishing human beings from other animals, “without which our brains would not have developed, our hands would not have become articulate and we would not have been able to travel long distances.”

The exhibit begins with Ferragamo’s research in the fields of science, art, architecture, archaeology, circus and dance, which led to a series of patents, notably the steel shank, which supported the arch, removed weight from the heel and ball, and facilitated the equilibrium of the body as it walked rather than obstructing it.

“I discovered the interesting fact that the weight of our bodies when we are standing erect drops straight down on the foot arch. A small area of between one-and-a-half and two inches on each foot carries all our weight. As we walk, the weight of our bodies is swung from one foot to the other,” Salvatore Ferragamo wrote in his autobiography “Shoemaker of Dreams.”

For Risaliti and Ricci, the capacity to be planted on the ground and raise one’s gaze to aspiration, achievement, advance — a gesture that also underlines human fragility in the potential to fall and fail — sums up the spirit of the exhibit from the first human footprints preserved by the eruption of the Sadiman volcano in Laetoli, Tanzania, 3.66 million years ago, to man’s first steps on the moon.

Wanda Ferragamo said the theme was fitting to her memories of her husband, too, who cultivated a deep interest in astronomy as well the architecture and anatomy of the foot. She said she remembered him walking the garden of their residence in Fiesole, Tuscany, head turned up, gazing at the stars.

Also on Wednesday, Damiani feted the opening of “Damiani, 90 years of Excellence and Passion,” an exhibition held at Florence’s Palazzo Pitti celebrating the 90th anniversary of the Italian jewelry company.

The retrospective includes the 18 jewelry pieces which won the De Beers’ Diamonds International Awards over the years, along with a selection of iconic bracelets, necklaces and earrings from the company’s collections. In addition, the limited edition of 10 pieces created by Damiani to celebrate its anniversary are also on display.

“We are extremely honored to be here, celebrating our anniversary in conjunction with the 60th anniversary of the Florentine center for Italian fashion,” said Damiani president and chief executive officer Guido Damiani, who noted that the entire value of the jewels included in the exhibition is around 10 million euros, or $13.6 million at current exchange rate. “But our goal is not just to buy the most precious and expensive gems in the world, we have the ambition to create timeless pieces — our jewels are not seasonal, but are not too classic at the same time.”

To mark the event, Damiani donated a one-of-a-kind jewelry piece to the Medici Treasury, a museum located on the ground floor and mezzanine level of Palazzo Pitti housing the Medici treasure, along with an important collection of jewelry pieces manufactured from the 17th century to today. In particular, Damiani offered the museum its Chakra, a necklace in white gold and diamonds produced by the company in 2003.