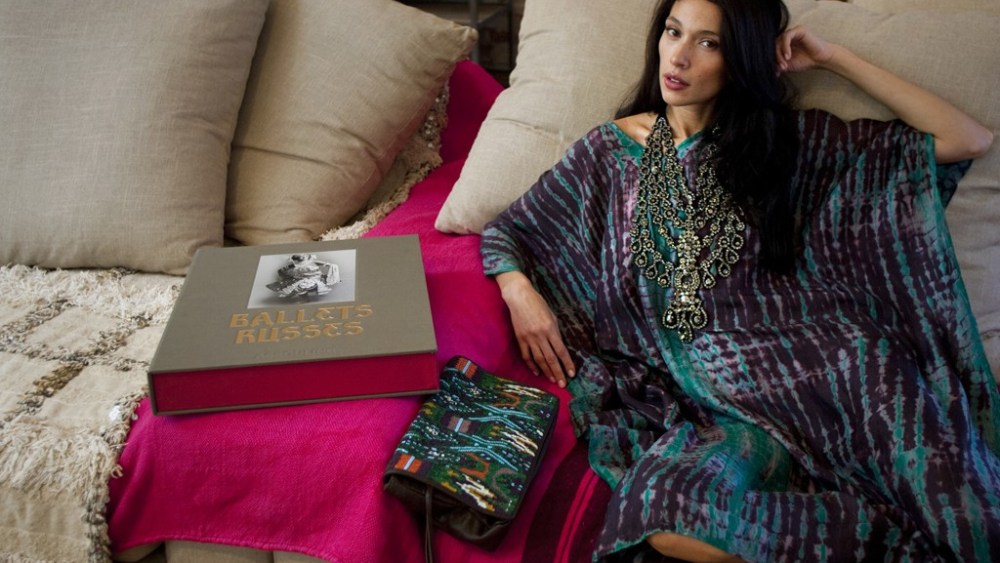 The first thing one notices when entering Stephanie von Watzdorf’s expansive, sun-flooded office, located on the fifth floor of 10 Crosby Street in New York, is the size of her couch. An extended sectional with seats deeper than a daybed, it’s bigger than many one-bedroom apartments in Manhattan and forms the centerpiece of a lush showroom. Von Watzdorf envisions it as a sort of Moroccan-style salon, where guests are invited to “discover” her exotic world of things picked up from and inspired by her travels — specifically Figue, her new collection of seasonless clothes.

To the left of the world’s largest couch are racks of colorful designs, from which von Watzdorf pulls out what she calls “the perfect caftan” in a colorful silk print with beading done in Bombay. One is inclined to wonder if the market needs another caftan, but von Watzdorf’s version exudes the kind of moneyed, bohemian nonchalance that presumably impressed Tory Burch when she hired von Watzdorf as her founding vice president of design seven years ago, launching Burch into the lifestyle stratosphere. But while Burch’s empire roots back to the waspy suburbs of Philadelphia, authentic aristocratic boheme runs deep in von Watzdorf’s bloodlines.

Her maternal grandfather was Leonide Massine, the legendary choreographer of the Ballets Russes, who had two children with von Watzdorf’s grandmother, Tatiana Massine, a ballerina and the third of his four wives. Von Watzdorf was born in Paris and spent summers on L’Isola dei Galli, a small island in the Mediterranean Sea between Portofino and Capri, which Massine bought in the Twenties as an outpost on which to rehearse with his students. “He worked with everyone from Matisse to Picasso, to Dalí — you name it and they all collaborated on incredible ballet productions,” says von Watzdorf, a tall blonde with brown eyes, dripping in ethnic jewelry. “I was surrounded with dancers and musicians and opera singers. For me, it was very normal, but clearly not everyone grew up that way.” Then there’s her father, Stephan von Watzdorf, an art dealer, who was born in Dresden, Germany and left during the War for Paris. Next to her mood board are family photographs, shot in St. Barth’s by Slim Aarons.

Figue is named for the fig trees on the L’Isola dei Galli because “they’re sweet, feminine, a little exotic and very reminiscent of the Mediterranean,” says von Watzdorf, who studied at Parsons School of Design and whose 20-year design career has included stints at Ralph Lauren, Giorgio Armani and Ann Taylor. She had produced a single season of the Figue collection when Burch came calling. “I understood her vision and it was very much in sync with what I was doing,” she said. “I didn’t think I would last that long but it was great and it was fun.”

Three years ago, von Watzdorf decided to get back to her own concept, which she describes as “a real bohemian gypsy spirited thing.” The collection is priced in the advanced contemporary range, from $150 for an embellished T-shirt to $1,600 for a custom jacket.

The idea is layered pieces that look like they came from an exotic locale and can easily be packed up to travel to one. Silk tunics come in colorful ikats with pompom tassels, tuxedo shirts have multicolored sequined bibs and silk dresses feature blown-up photographic insect prints. There are leather jackets, shearling vests and shaggy alpaca fringed sweaters and ponchos knitted by a group of women in Bolivia.

Another signature: recycled military jackets that von Watzdorf has customized — one-of-a-kind — with fabulously kitschy embroidery. One style is decorated with an Egyptian pyramid on the back. Another has evil eyes. Accessories include chocolate brown suede fringe totes, neon lambskin zip pouches and iPad cases, and pompom bags.

It’s an impressive offer for a launch, and von Watzdorf has not done it alone. Figue’s chief operating officer is Sabina Schlumberger, who is married to Wilfrid Shlumberger of the Sao Schlumberger clan. After earning her M.B.A. from Sloan, she worked with fashion startups including an early Chris Burch project Winter & Miggs, Roberta Freymann and JC de Castelbajac, when it was launching in the U.S.

Von Watzdorf and Schlumberger are showing to a handful of specialty stores, but, to start, the primary retailer for the collection will be figue.com, which launches Tuesday. Eventually, the site will sell all the extras — elaborate sculptural necklaces from Indonesia, Swiss dog collars and Beryll sunglasses von Watzdorf already has for sale in her showroom — plus more. “I want to do favorite sun creams and lip gloss, maybe ‘Stephanie’s favorite things,’” said von Watzdorf. “People always ask me, ‘Where did you get that?’ Here, you can buy them.”