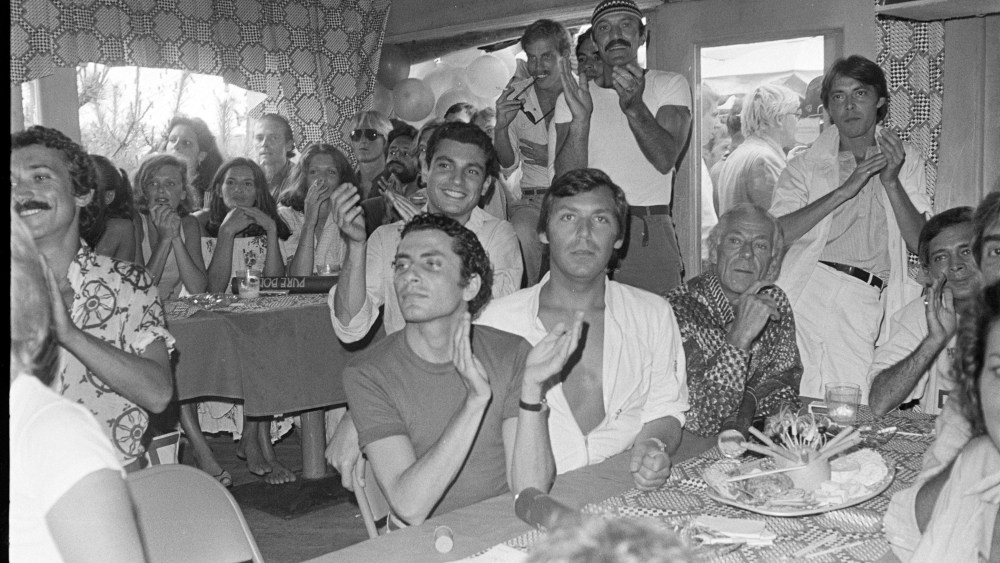 Day trip, road trip, field trip — as the pandemic slogs along, any kind of trip will do.

As a salute to the Fourth of July weekend, WWD dipped into its archives to resurface some snapshots of surf and sun on Fire Island in the Seventies — specifically, the summer of 1976. That’s when former WWD staffer André Leon Talley photographed fellow fashion-minded New Yorkers kicking back one weekend on the 31-mile island.

In an interview earlier this week,Talley recalled that he started visiting friends on Fire Island while working for WWD, but those jaunts were work-free reprieves. But as a few of these photographs reveal, Talley had somewhat of a working weekend in August 1976, attending the second annual Pines Conservation Society fashion show. While the inaugural one was televised, the follow-up was not and only two of the 25 featured designers — Donna Karan and John Anthony — made a cameo at the Botel pool. “Stay-at-homes” included island regulars Stephen Burrows, who spent the afternoon cutting his friends’ hair, and Calvin Klein, who visited neighbors in search of saffron oil needed for a dinner for two.

”Fire Island was fun. It stood for fun with a capital ‘F’ and freedom with a capital ‘F.’ People were free,” Talley said. “I had never seen anything like it because I came from the South. It was an eye-opening moment of liberation to see a community where people can just be themselves. I mean gay men in particular. There was a gay women’s section on the island, but this was mainly gay men.”

Reminiscing about those carefree weekends, Talley described a liberating, accepting and happy environment where all were welcome. While drugs and explicit sex were the norm for some, that was not his game. “I was an observer of the scene. As you can see from the photographs, they are innocent pictures. I was never taking pictures of people having sex in the bushes or things like that. For me, it was a very innocent time and a very wonderful time,” he said. “It was just a great place to be — wonderful sun, open air, beautiful weather was almost guaranteed and dancing. The focus was on the socializing and dancing at the Botel.”

While winging it on a seaplane was the preferred mode of transportation, driving or taking the Long Island Railroad to catch the Sayville ferry did the trick, too. Many in the fashion crowd welcomed the island’s simplicity after a hectic work week. The weekends often started with wonderful food at a host’s summer house, followed by a stroll on the beach, a swim in the pool or a dunk in the ocean, and then it was off to tea dance at the Botel. Talley said, “It was very exciting. Suddenly, you’re going to something at five o’clock in the afternoon and dancing. Ahhh, it was amazing. The disco music was amazing.…People were dancing in and dancing in their swimsuits then.”

Burrows and Klein were “the fashion stars of the island,” but other stylish weekenders included Marina Schiano, Elon and Diane von Furstenberg, Giorgio di Sant’ Angelo, Manolo Blahnik, Perry Ellis, Bethann Hardison, DD Dominick, Victor Hugo, Peter Lester, Joe McDonald, Angelo Colon, Maxime de la Falaise, Halston model Karen Bjornson and Ronald Kolodzie. Poolside or surfside, bare feet and sunglasses were a given, and many lounged around in bikinis, shorts, cutoffs and sarongs. “People just loved it. I remember the conversations would be, ‘Are you coming to the island this weekend?’” Talley said.

There was also an undeniable sexual overtone in “how the bodies were on display, the attention to the body and the Greek ideal of a man. It was very explicit the way they were having sex in the afternoon in the bushes, in the brambles and off from the beach. There was group sex. Once Manolo Blahnik and I walked in on a group sex thing by mistake. We were giggling. We had never seen anything like it,” Talley said. “We were not welcome, because Manolo and I were dressed up over-the-top.”

Walking up and down the beach, Talley said he and Blahnik would see people wearing “bikini thongs” and suntanning. “Manolo would be wearing Saint Laurent. I’d be wearing something like a version of a Geoffrey Beene black-and-white wool and cashmere French blanket as a one-shouldered sarong with a Japanese parasol and a big straw hat. So we would sort of be the anti-Fire Island citizens but weekend guests,” Talley said. “But we were all welcome. It was a very warm place. It was not a place of hostility.”

Although Talley never felt that drugs were being pushed on him, they were all around him on the island, he said. Over time though, the drug use — primarily marijuana and cocaine — became “so explicit and evident that people had lost control,” he said. “And this was way before AIDS.”

One night while watching “The Boys in the Band” at someone’s beach house, someone spiked the punch with more than alcohol. “That was a signal to me that it was a place that could be dangerous, if you allowed yourself to fall into the traps. I never wanted to fall into the traps,” Talley said. His point-of-no-return arrived one summer morning in the late Seventies, when he and Schiano had to step over passed-out bodies on the boardwalk. With that, the pair vowed to never come back.

All in all, Talley considered that time on Fire Island as a moment of freedom and liberation. “The picture of Bethann [Hardison] surrounded by all these boys represented the best of Fire Island. She’s wearing these extravagant pants. It was all great. That’s how I got to know all of these people,” he said.

Hardison’s leopard-printed drawstring pants were designed by Burrows, who can be seen in a similar pair in other photos. After taking a look at Talley’s photos, Burrows described the pants earlier this week as “joggers without the elastic at the ankle.” More than anything, the easy breezy mood of that period stays with him. He said, “It was such a free social time that was unlike anything that had happened before. There were no cars. That made it a fantasy island that everyone enjoyed and loved. The DJs played all the new music and we all heard it first.”

Having visited the island from 1965 until 1984, Burrows said, “It was a great time in New York. It was very diverse. That was what was so unusual about it — all the different nationalities that were involved there. That made it great and like no place else. All the artists gravitated there every weekend, and dressed up and went to parties and danced at The Sandpiper, the Botel and the Monster in Cherry Grove.”

Fire Island was also where Burrows was discovered by Joel Schumacher, during the future filmmaker’s Condé Nast days. The designer said, “Joel worked for Vogue with Carrie Donovan. He came up to me on Fire Island and said, ‘You have great style. We would like to shoot you for Vogue.’ Joel also introduced me to Geraldine Stutz at [Henri] Bendel’s. He suggested I go see her, when [my store] O Boutique was closing.”

When the AIDS epidemic took hold in the Eighties and “all my friends were dying, we just lost interest in going. It wasn’t the same. Everyone separated. It was just the end of a time,” said Burrows, adding that others started drifting away to other states, like California.

But hanging out at home or poolside has always been one of the draws of the large barrier island off the south shore of Long Island. As noted, Talley’s aforementioned coverage of the 1976 Pines Conservation Society fashion show referred to Burrows and Klein as “stay-at-homes.” Burrows explained his backyard barber shop this week: “I used to cut my own hair. I just started cutting people’s hair. I didn’t like the way they looked, so I just changed it. People liked what I did. I wasn’t really a hairdresser.”

Talley said “stay-at-homes” was a commonly used term with Fire Islanders at that time. Regarding the term’s current coronavirus-driven popularity, he said, “It is a coincidence. Apt for now; apt for then. In many ways, some people just wanted to get out to The Pines and shut down from hectic career schedules. It was a calm and serene environment. I hope it still has that today.”

Hardison agreed, describing how the weekend revelers retreated back to the city by Monday morning and The Pines returned to the simplest place. She and her son were among the families that whiled away the work weeks there at her interior designer friend Angelo Donghia’s house. Kids would run on the beach, and pull their wagons and bike on the boardwalk. “You never had to have any fear that they would have any problems with anybody. You never had to feel that something could go wrong and they would be unsafe,” Hardison said. “You would just be so calm.”

Asked what people might re-create from that time today, Hardison said, “Forget that. There ain’t no re-creating. They couldn’t re-create it even if they could imagine it. And most people are too distracted to remember anything that happened before. It’s straight up.”

She continued, “Even when I look at the photographs of the men and the boys, it was a typical look. It’s so interesting how beautiful they all were, really. There’s no re-creation of this. It was truly a moment in time.”

Talley presented another view: “What could be wonderful today is the sense of community, wholesome and positive community. I think it still exists on Fire Island today, although I’ve never been there since the last time I left. A place where gay people had their own community, and it was a very, very positive environment. The Castro District in San Francisco is a prime example of this type of community — stores, restaurants, social life all built around this community. And it wasn’t isolation. Straight people were always welcomed. Notice the amount of straight women in the photographs.”