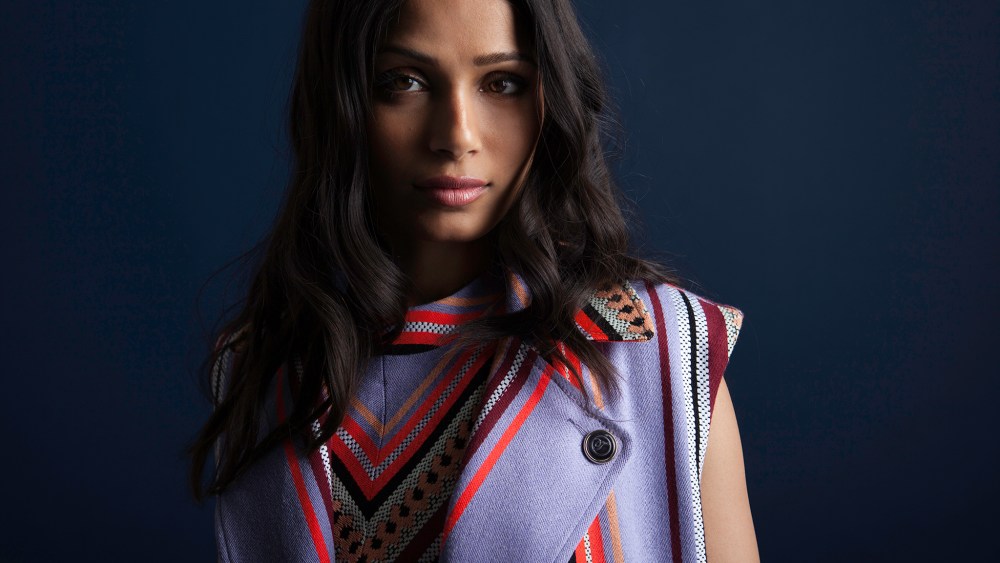 Freida Pinto thinks everyone would benefit from a little bit of improv.

“I think, even for people who aren’t actors, it is great to take an improv class. It is great to unleash something within you in an environment that is healthy instead of lashing out or heating up,” explains Pinto, colorful in a Temperley outfit on an otherwise gray New York day. “I kind of feel like I grow every day, learning so much about people — people that I don’t meet, but I play them — and so I learn to empathize more. I think this is the most important thing [for actors] because sometimes we play some unsavory characters.”

The Indian actress has picked up her first television role, starring alongside Idris Elba and Babou Ceesay in the limited Showtime series “Guerrilla.” The six episode political drama, which premieres on April 16, was produced and written by Oscar winner John Ridley, who also directed three episodes. The show is set in London in the politically and racially turbulent early Seventies amid the rise of the Black Power movement.

“I actually heard about the show last year in March, before the auditions and the casting process had even started. My team had already read the pilot episode and they were like, ‘There is a show that John Ridley is directing and has written as well, and there’s nothing to change about this character. It’s almost like it’s written for you,'” Pinto recalls. “But, obviously, it wasn’t written for me, and I had to go out and fight for it.”

She met with Ridley and landed the starring role. Pinto describes Ridley as attentive, caring and involved. “We call him the gentle drill sergeant,” she adds.

Jas and Marcus, portrayed by Pinto and Ceesay, respectively, are an interracial couple who, after freeing a political prisoner, become involved with a radical armed underground cell targeting the Black Power Desk. Elba is Kent, an ex-lover of Jas’ and proponent of nonviolent resistance.

“What’s driving Jas is definitely a restlessness — a restlessness that she’s felt for a very long time, since she was a child because her father is a political prisoner in India and he’s been in her mind,” Pinto details of her character.

“The guy’s wrongly imprisoned just for standing up in a way that [was] deemed violent and called an act of terrorism,” she continues. “Someone makes the rules and then you’re expected to go along with them, even if you don’t agree with them. Jas and Marcus don’t agree with them, and they don’t want to go along with it. They’re the different ones and they’re the ones who are often criminalized for standing up and using their voices, even in today’s society. I feel like in ‘Guerrilla’ as well, we touch upon that subject matter of criminalizing the ones who speak up.”

The show has already attracted controversy ahead of its release. At a recent Q&A in London, attendees questioned the show’s lack of prominent black women. Ridley has responded by defending his choice to highlight an Asian woman in the lead role. Certainly the politically charged show is being released in an especially politically charged climate. Although the timing of the release is happenstance, Pinto says that “Guerrilla” — and telling a part of history that isn’t often represented in mainstream entertainment — may strike a different chord with viewers by being released post-Brexit and in the aftermath of the U.S. presidential election.

“We didn’t think a lot of things were gonna go down the way [they] went down, but maybe in a way, it’s a good thing that there’s an awakening of sorts within the fabric of human society, and maybe ‘Guerrilla’ will be that show that speaks to [people] on a one-on-one level. At least it did for me,” she says. “I was in England when Brexit happened, and just to feel people’s emotions and the rawness of what they were feeling at that point in time — and confusion, more than anything else. Like, what does Brexit mean? What are the rules and regulations? Everybody wants to know the pattern, what they’re gonna follow. And the confusion was actually something that we used and felt and injected into our performances.”

Pinto is bright-eyed and fast-talking, and she carries a striking but humble presence. On the way in and out of a photo studio, casual passersby pause for a double take. The fashion-friendly actress has maintained a steady level of visibility since she shot to fame with “Slumdog Millionaire” in 2008, but has yet to pick up a role with enough clout to propel her to the next stage of fame. “Guerrilla” may signal a new push; later this year she stars alongside Demi Moore in “Love Sonia,” which deals with international sex trafficking, and Pinto will appear in the live-action Warner Bros. mega-production “Jungle Book: Origins” out in 2018.

Take a Look Back at Freida Pinto’s Red Carpet Style >>

Pinto references Meryl Streep’s Cecil B. DeMille Award speech at the Golden Globes, during which Streep quoted the late Carrie Fisher: “Take your broken heart, make it into art.” The quote relates both to Pinto as an activist and as an actor.

“I’m an activist — not necessarily a political activist, but politics and policies do determine my activism quite a lot,” she says. “You know, [actors] are able to channel all our emotions into all these various characters and look into the darkness, the ugliness, the beauty, the nurturing qualities, all of it. So, for me, it’s quite therapeutic.”