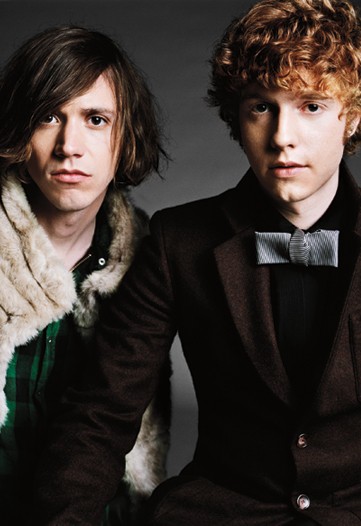 Their demo sparked a bidding war between Kanye West and Pharrell Williams to sign them (Williams won, attaching them to his Star Trak label), and within a year, the Harvard alum rockers were on tour with Lady GaGa. Their single, “She Loves Everybody,” was played during an episode of “Entourage” and is used in MTV promos. Now D.A. Wallach and Max Drummey are releasing their first album, “Love the Future.”

Wallach croons and Drummey, naturally, drums, but they’re known to incorporate guitar and, on some tracks, an orchestra’s-worth of instruments.

Although “Love the Future” will be Chester French’s first introduction to the masses, Drummey calls the release “totally anticlimactic,” considering it was finished two years ago. They’ve spent the remaining time, he says, “tightening it up.”

They’ve also been busy making headlines. In 2008, Drummey stunned fans with a quickie wedding to British social Peaches Geldof, daughter of former Boomtown Rats singer Sir Bob Geldof. Divorce rumors swirled from the get-go, and the couple fizzled after a matter of months.

Wallach, meanwhile, has attracted attention from the fashion world — including a spread in L’Uomo Vogue — with his three-piece suits and bow-tie looks. The frontman says his style relies on “very simple and classic looks. I don’t always achieve it.”

The duo are not waiting for commercial radio to boost their popularity. Chester French regularly update their blog, MySpace, Twitter and Facebook pages. Earlier this month they released a free “mixtape” album with Clinton Sparks, titled “Jacques Jams, Vol. 1: Endurance” (a play on the cheesy Nineties workout mix “Jock Jams”) on their Web site, which has been downloaded an estimated 80,000 times.

“We want everyone in America to have this album over the next six months,” says Wallach. Drummey puts their goals even less delicately: “Money, y’know, funds. Enough to fill my bathtub with it and bathe in it.”