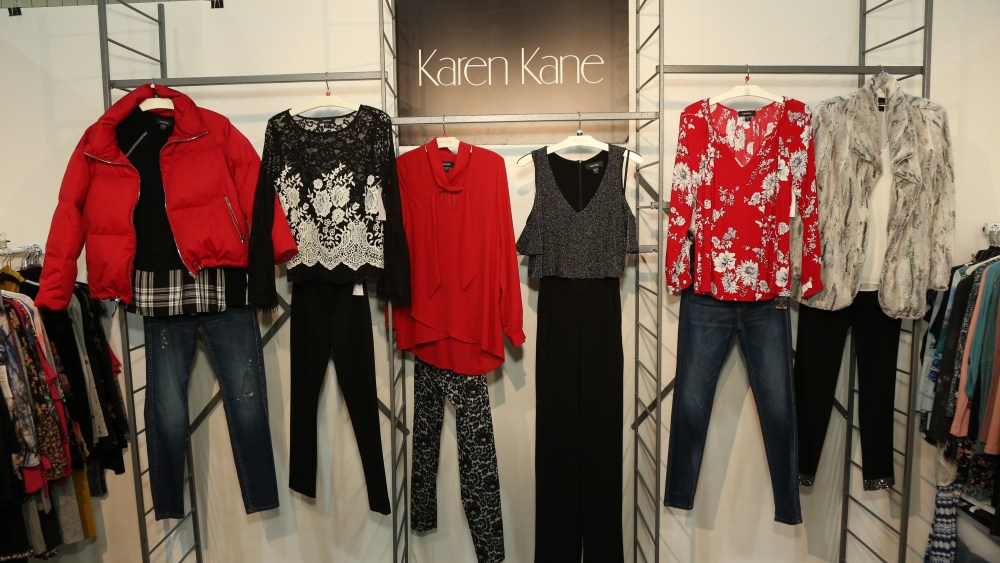 The color red was making a comeback as a fall neutral at the shows, joining the traditional sea of black, gray and camel.

Vendors in past seasons incorporated a smattering of red here and there, but the color was found mostly in prints. This year, red was more prevalent — think more the blue undertones instead of orange — and replaced the richer hues of garnet and maroon from last fall.

At Moda, which targets the contemporary moderates space, the brand Karen Kane was showcasing a short red puffer jacket, along with a red blouse and red and white tunic top, in combination with ivory and black tops and bottoms.

Sandra Saunier, sales representative for Karen Kane, said of the brighter shade of red, “The stores from the Bahamas are buying for immediate delivery, but the local stores are shopping for fall and holiday deliveries. I’m happy to see the red again and the response has been good.”

Saunier said other items buyers have been favoring were lace, embroidery and faux fur. The wholesale price points for blouses was between $58 and $68, with some options including rhinestone detailing along the neckline. Faux-fur options started at $123.

While traffic was steady, Saunier said it could have been busier. Sunday, the first day of the show, was busy, but seemed to have trailed off slightly by midafternoon on Monday. One reason could also have been the show was considered an “in-between,” instead of one of the main shows for the fall season.

Patti Kim, owner and designer of her namesake brand, also said that traffic is “OK.” She too was showing for fall and holiday. Faux-fur vests and a mixed-medium sweater jacket with faux fur were among the offerings. Also popular were Italian ponte knit jackets. She had several in black, one in red and another in an ivory and black combination. The faux furs wholesaled at $76 to $86, while the ponte knits were between $89 and $92.

At Mitchie’s Matchings, designer and creative director Susan Cameron said the most popular items were ponchos and wraps, which featured fur details. One wool and cashmere poncho with fox trim was a particular favorite among buyers. So was a cashmere wrap that featured fur balls as a detail. They wholesaled for $99.

Cameron, who said that the Canadian firm has over 1,500 customers across North America, said that more buyers were favoring mixed medium items that had the fur as an accent over a full fur vest or jacket option. Mitchie’s offered the latter options as well, but it no longer offered rows and rows of brightly colored fox neck warmers or wrist wraps as in years past. While there were a few brightly colored options, most of the colors were basic neutrals such as a red, several shades of gray and beige and khaki.  For the wraps, they were available in shades of gray and khaki. And while there were the traditional gloves and fur-trimmed options, there were also some fur-trimmed mittens, which Cameron said were favorites among the ski shops.

“We see people moving away from glitz and sparkle, and no rhinestone trim. The colors we’re following are the Loro Piana colors [that are basic and neutral),” she said.  According to Cameron, “Traffic is good, but the show also has never been in June before — usually it is in May.”

Over at Ravel, the brand showcased red wraps using a viscose/acrylic blend, as well as red, orange and hot pink sweater options that wholesaled for between $59 and $62. One of the sales representatives said traffic was good, and both tables had the brand’s sales team taking orders from buyers.

Over at Fame, which focused on the younger contemporary lines and juniors brands, Minuet was also showcasing a red dress that wholesaled for $42. Another one it was highlighting was a short black sequined dress, priced at $37 at wholesale. Jenny Sunu, sales associate, said, “Traffic was fair, maybe better than last May.”

She also said the next show is July, followed by one in September. “Buyers don’t know which one to come to,” Sunu said of the calendar shift to June from May.

As for which show to be at, Sunu said, “If you’re a supplier, you have back-to-back shows now in June and July. If you’re selling for fall, you need to come in June because people would have bought back in May, and next month would be too late.”

A UBM representative did not respond to a query about the change in show calendar.

At Why, maxi and midi length options in red were showcased at the front the booth. One was a red floral skirt on a black background with a black lace top. Another was a long dress in red and hot pink, wholesaling at $59. Other options include many tops and longer length jackets and dresses in a variety of colors.

Rosa La, a sales representative, said traffic on Sunday was slow, but picked up on Monday. She also said that the scuba knit fabrication — basically, a double-knit fabric that is sometimes referred to incorrectly as fashion Neoprene — has become “popular” among buyers in the young contemporary space. While the company has mostly focused on suits and evening dresses, its foray into casual apparel represents its “youngest” consumer base.

At L’Atiste, sales representative Stephanie Salales was wearing a sequined bustier and pant set that wholesaled for $34. A long sequined jacket was $39, also at wholesale.

“Traffic has been slow compared to May 2017. We won’t be showing in July, but will be back in September instead,” Salales said.

For more at WWD: