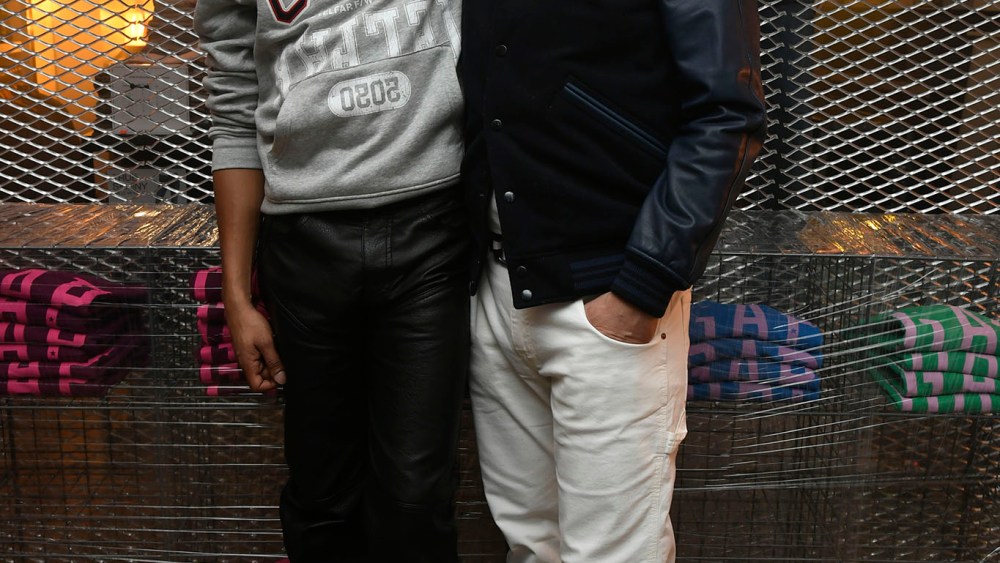 Telfar will create a collection with the Gap and he’s headed to Paris during Men’s Fashion Week to reveal and celebrate the partnership.

The New York City-based designer, who presented his collection at Pitti Uomo earlier this month as guest designer, is working with the retailer to design a collection that will launch at Gap stores globally and online later this year. But beyond that, details of the collection, which Gap will produce, are still being worked out.

“We’re thinking through quite a few creative ideas,” said John Caruso, head of design for Gap. “What I can tell you is that it’ll be centered around things that made our brand great like denim, T-shirts, sweatshirts — essentials that customers really love and expect from us.”

“We haven’t yet worked on clothes,” said designer Telfar Clemens. “This is going to be our next process, because we have time to work on it and be able to do it in America where the spirit of Gap has been.”

But that isn’t stopping him from throwing a party, one that celebrates the American roots of both companies. “We like things that don’t feel like a fashion event,” Clemens said of the party that will be held at Gap’s Paris flagship.

So Telfar’s creative director Babak Radboy suggested they throw a version of its now-infamous White Castle party that was held at the hamburger restaurant in Times Square following the brand’s fall 2015 runway show. The fast-food chain has long been a sponsor for the brand, even providing food for its “The World Isn’t Everything” film premiere in New York City in September.

“People were scared to come in [the White Castle party] because they thought the cops were going to shut it down,” Radboy said. “Gap is really supporting our show. It’s not a Venn diagram of Gap and Telfar. They’ve opened the space for us to transform.”

Although the line is still a work in progress, the event will serve to introduce the first collaborative piece: a sweatshirt that features the first iteration of the new Telfar logo.

“We’re working through some other scenarios to get it in the hands of new customers for us,” Caruso said, adding he hopes the relationship will continue beyond just one drop. “We’re considering it an ongoing relationship and not just a one-and-done,” he said.

“The idea really is to extend the creative community for our brand and reach out to people like Telfar that have similar brand values and a love for the product that aligns with the brand. [We seek to work] with people that can weave in and out of the brand and [that are] shifting fashion culture in the U.S. and globally,” Caruso said.

That includes Los Angeles-based Atelier & Repairs which collaborated with the retailer last year on a capsule collection that was available at Gap stores in Flatiron in New York City, Ginza and Osaka in Japan and Oxford Street and Brewer Street in London. The project helped Gap tell a sustainability story. Caruso added that the company is “having several conversations with people right now,” but did not go into detail.

For the Telfar collaboration, Gap approached the designer about the project, and the connection was instant after Clemens and Caruso bonded over past Gap ads and nostalgia with the company. “When energies combine and feel optimistic, it’s naturally the right partnership,” Caruso said.

Clemens enjoyed the company’s ads — “it was to me a status symbol,” he said — and recalled shopping at Gap at Montgomery Village in Maryland with his mom when they lived briefly before moving back to New York City. But his interest in the collaboration is not just nostalgia-driven, it’s also strategic. He is attracted to the company’s accessibility and how it connects with his inspiration: the everyday person.

“We’re always attracted to what’s normal. What inspires us is how people look, and the ability to sell in middle America is a big deal,” said Radboy. “To be in St. Louis and Columbus, that’s inclusion. It’s the way we grew up. You want that placement in American culture to be at the mall.”

Radboy said that the brand and Gap share the “same ingredients” including the “collegiate font,” but with Gap’s manufacturing capabilities, some of Telfar’s designs such as a half tank that retails for over $300, could be available at a more-affordable price point and in numerous colors at Gap stores. “We’re not into scarcity, we’re into ubiquity,” he said.

The party on Thursday in Paris closes a long European tour for Telfar that began in that city in September through an invitation by the Fédération de la Haute Couture et de la Mode to present his spring 2020 collection, on the Paris Fashion Week calendar for the first time. He showed his film “The World Isn’t Everything” at the show, shortly after it previewed in New York City.

From Paris, he trekked to Italy, where he moved his production and presented his first ‘Made in Italy’ looks for his debut at Pitti Uomo.

After the party, he’ll close his whirlwind European adventure and head back to the U.S. to work on the Gap collection as well as a bag for the One x One fellowship program with Swarovski, the Slow Factory Foundation and the U.N. Office for Partnerships.

Radboy said, “We’re doing a no-plastic bag out of lab-grown leather and presenting as part of the U.N.”

Although they were skeptical at first, they were finally convinced after speaking to the parties involved and realizing they were “on the same page about it.” It didn’t hurt that they were also allowed to do a photoshoot in the U.N. “We were all in,” he said. The bag is also in the beginning stages of development.

How Much Did Ousted Gap CEO Art Peck Get Paid?