The brand’s latest back-to-school campaign features boys and girls wearing a variety of printed T-shirts. One of the young boys is referred to as “The Little Scholar” and “The Smarty Pants,” and is pictured wearing a T-shirt emblazoned with Einstein’s portrait.

A little girl wearing a pink and white sweatshirt and a headband with silver cat ears is referred to as a “Social Butterfly.”

Over the past year, children’s wear companies have made efforts to eschew gender stereotyping. Mattel has added more body types and a wider range of skin tones to its Barbie Fashionista line, while the British children’s retail chain Hamleys has abandoned its blue and pink signs for boys and girls.

Gap said Tuesday that its campaign also features other characters, including a little girl as an adventurer and a boy as a comedian, and that, as a company, they have often partnered with non-profit organizations to promote women’s rights, including a collaboration with Ellen DeGeneres on a capsule children’s collection.

“The campaign’s theme was going back to school in comfort, both in your clothes and yourself. The Gap brand has always stood for individuality, optimism and creativity. Our intentions have always been to celebrate every child, and we did not intend to offend anyone,” said a Gap spokesperson.

The campaign for Ellen DeGeneres’ collection for Gap, released last April, featured young girls in a series of acrobatic movements, its theme being “girls who can do anything.”

But the campaign faced similar social media criticism and was described as “dehumanizing” for featuring three white girls in active poses, while the black child was shown standing still, with one of the other models leaning on her.

The company removed the image from its site and issued an apology.

Gap has not removed any of the latest back-to-school campaign images from its e-commerce site. 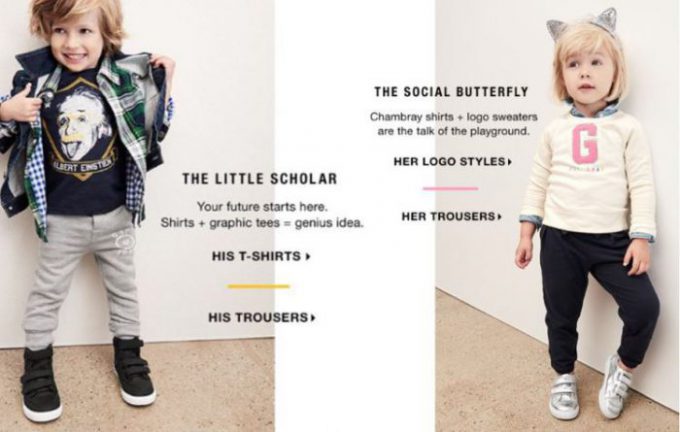