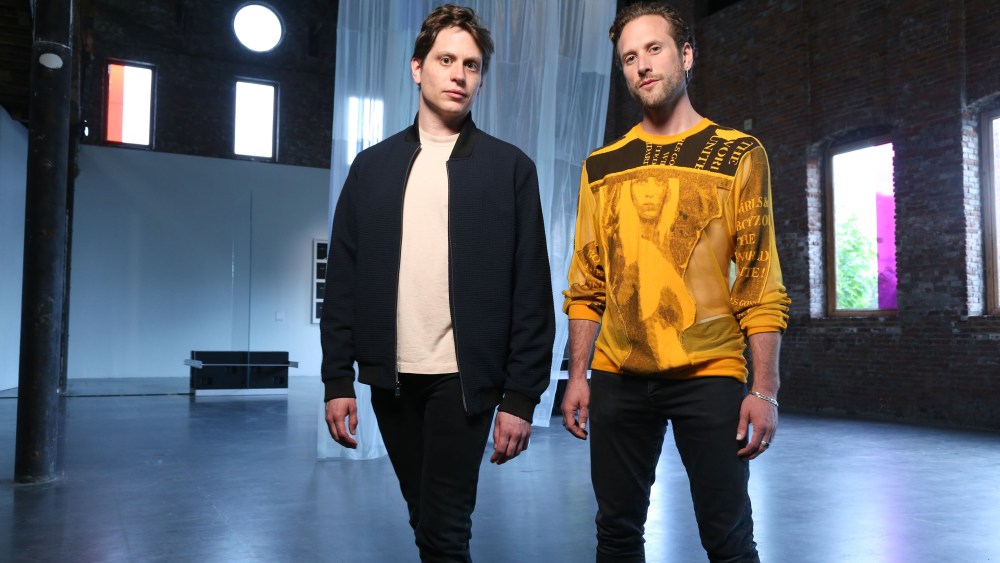 The red brick environment of Pioneer Works, a former iron works factory built in 1866, may at first seem like an odd environment for an exhibition exploring modernist architecture. But the simplistic, angular designs of architects such as Philip Johnson and Rudolph M. Schindler have plenty in common with the lofty Red Hook space — the first iteration of which burned down less than a decade after being built — and the art shows and exhibitions now filling its interiors. None of the aforementioned is here to stay.

“We’re thinking about how a lot of these modernist architectures are thought of as permanent, because you’re working with things like glass and steel and concrete,” says Brennan Gerard. “But actually, it’s all impermanent. Nothing is permanent.”

Artistic duo Gerard & Kelly, the other half being Ryan Kelly, are showing an installation of new works grouped together as “Clockwork” at Dustin Yellin’s foundation in Brooklyn, much of which was created during their artist residency there. The show also marks the New York premiere of “Schindler/Glass,” a 35-minute film — the duo’s first — of public movement performances staged at the Schindler House in West Hollywood and the Glass House in Connecticut. Gerard & Kelly describe those performances as part of their research on modernism, which they have continued to explore in subsequent work.

Throughout its run, the exhibition will include live public performances during the last hour on Saturdays and Sundays, during which dancers will interact with the sunlight filtered through vinyl-colored windows and cast throughout the warehouse space.

“We’re very interested in these performances that are already happening,” Gerard says. The space’s natural light also interacts with the transparent panes of glass that make up “skin and bones [2018],” a new work inspired by Ludwig Mies van der Rohe’s 1951 Farnsworth House in Plano, Tex., which was commissioned by Edith Farnsworth. In that work, a recording of the river running beside the Farnsworth house is played through a subwoofer situated between two panes of glass, causing them to subtly vibrate. It’s an apt representation of the friction between the house’s architect and client.

“The whole narrative of Mies and Farnsworth often gets reduced to a story of romance, heterosexual romance and unrequited love,” Gerard continues. “For us, it’s a much more interesting and complex story. Because she equally wanted to build the most important house in the world when she commissioned this. To have a champion of modernist architecture at the time — the 1940s — was amazing. And she was a single woman, and she had the money as a doctor to commission this house. She’s a total radical, it’s amazing. But disputes happened around the livability of the house.”

“Specifically, the fact that the thing that she was so invested in creating, this glass box, she ultimately found it unlivable,” Kelly chimes in. “She negotiated a curtain to be installed. And, you know, Mies van der Rohe, the architect, said, ‘Oh well, a house for a single woman, she was 45, there’s no program, so I can do whatever I want.’ So he made an open plan house, and neglected, among other things, to build her a closet. So one of her quips was, ‘There’s no where for me to hang my nightgowns.’”

“This is also a way for us to get some of the darker, overlooked parts of modernism. There are some blind spots there,” Gerard says. (One of those blind spots is highlighted in “Private,” which touches upon Philip Johnson’s dark political past as a fascist during the Thirties.)

“And the curtain is also one of those blind spots, too, because this house was made for a single woman,” Gerard adds, gazing at “Untitled (Edith),” a sheer hanging panel of fabrics constructed from 55 vintage Fifties chiffon nightgowns. “So we gave her a curtain — that’s a portrait of Edith.” During exhibition hours, a side door of the building is propped open, causing the curtain to blow in the wind, becoming its own independent movement-based performance.

Another piece in Pioneer Works is a grid of silkscreen prints created from renderings of the “performance” of the space’s natural light at exactly 4:33 p.m. on the first day of every month. “It’s a calendar,” Gerard says. “It’s our homage to John Cage’s ‘4’33″‘ which is the work of silence, because we were very struck by at that time, without anybody doing anything, there’s this amazing light performance that takes place when it’s sunny. And it changes over time.”

The next chapter in Gerard & Kelly’s “Modern Living” project will take them to Eileen Gray’s villa in the south of France, villa E-1027; their next video will unite the performances created for the Farnsworth house and E-1027.

“The project is an ongoing story. It travels through these houses, and I actually think this exhibition is the first chance to really kind of start to perceive the whole thing,” Kelly says. The “Clockwork” exhibition also serves another purpose. “To bring the chapters together; to bring the sites together,” adds Gerard. “To bring the Glass House, the Schindler House and the Farnsworth House, which are separated by such a distance — in time too, historically — into this one space.”