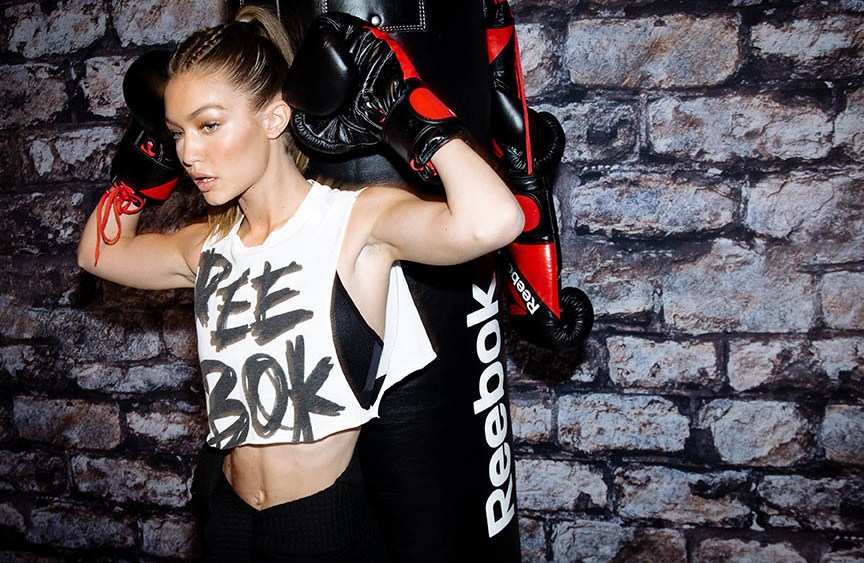 NEW YORK — Two days after Gigi Hadid appeared in the televised broadcast of the annual celebration of lingerie-clad, other-worldly physiques known as the Victoria’s Secret Fashion Show (Hadid is not a contracted Angel for the brand though she did walk the runway in wings), she was in more down-to-earth garb — ponytail, gym clothes — here on Wednesday to talk about her imperfections.

“Screaming into pillows is good,” said Hadid on the topic of how she handles nerves, anxiety and social media hate. In October, Reebok named Hadid the new face of its #PerfectNever campaign, which it introduced in July with Ronda Rousey as a subset of its massive “Be More Human” push launched last year.

Jumping from Rousey to Hadid might seem like a leap, but Reebok has made a play for combat sports as its athletic niche. Rousey is a UFC champion. Hadid, who played volleyball growing up, has publicized her preference for boxing as a workout.

As the hashtag suggests, the concept plays to the old adage that nobody’s perfect and that’s a good thing. If Hadid, one of the most successful fashion models working today, seems an unlikely pitchwoman for imperfection, Reebok is banking on the power of her personality as much as her looks to translate its message.

With 26.4 million Instagram followers, Hadid already has an expansive podium, and with this campaign Reebok is giving her the mic in a way not usually afforded to the typical advertising campaign model. Aside from an hourlong workout, a good portion of the press event Reebok organized at Skylight Clarkson Sq on Wednesday was devoted to letting Hadid candidly talk about her own issues, insecurities and work ethic with some of her peers. A panel discussion between Hadid, actresses Lena Dunham, Ruby Rose and, Zoë Kravitz, and Olympians Aly Raisman and Jessica Mendoza raised the topics of body shaming, mental health, gender identity, female empowerment and the ever-present subject of how to deal with being attacked on social media.

“I’m not deleting my account but I take the app off my phone,” said Hadid of taking a periodic break from Instagram for mental clarity.

Some of the experiences the women shared were more relatable than others. Raisman, a two-time member of the American Olympic gymnastics team, talked about being self-conscious about her muscles. “It took me being able to compete two times at the Olympics and being one of the best gymnasts in the world to be confident and think about how this body has made me into the gymnast that I am,” she said. “When I was younger it was just so hard because every kid in my class said my muscles were gross and disgusting.”

Rose, the Australian actress, talked about her struggle with gender identity and the power of individuality. “You live once, so however long you have on this earth, why try to be something you’re not?” she said. “Even now, I don’t necessarily identify as a woman, I’m just kind of on that spectrum.”

Dunham, best known as the creator or “Girls,” talked about her long history with meditation. “My mom got me into Transcendental Meditation when I was nine because I was such an anxious child,” she said. “You just return to the place where you’re whole and you’re perfect and there’s nothing but your perfect, beautiful, limitless consciousness.”

After the panel, Hadid conducted charmingly off-the-cuff interviews with small groups of journalists, fielding questions about what kind of gifts she likes to give, what kind of insecurities she has and how playing sports influenced her work ethic. “It goes back to my coaches and my step-dad saying, ‘Your time is just as important as everyone else’s,’” she said. “If I was late to practice, the whole team had to run. If I’m late to my shoot the whole shoot doesn’t have to run…but it’s the discipline that builds character.”

One of Hadid’s key points was that even in modeling her physical beauty and fame only go so far. “I work with people who push me everyday, especially in high fashion where people didn’t think I was ever going to work. I made a conscious effort every day to be somebody people like to work with and like to be around,” she said. “That has helped me more than I can ever tell you.…I’m not the prettiest or the best model but I think it’s important to be kind and just give energy to the people you work with. I hope that a lot of models learn from that.”

Not just models — that goes for everyone.