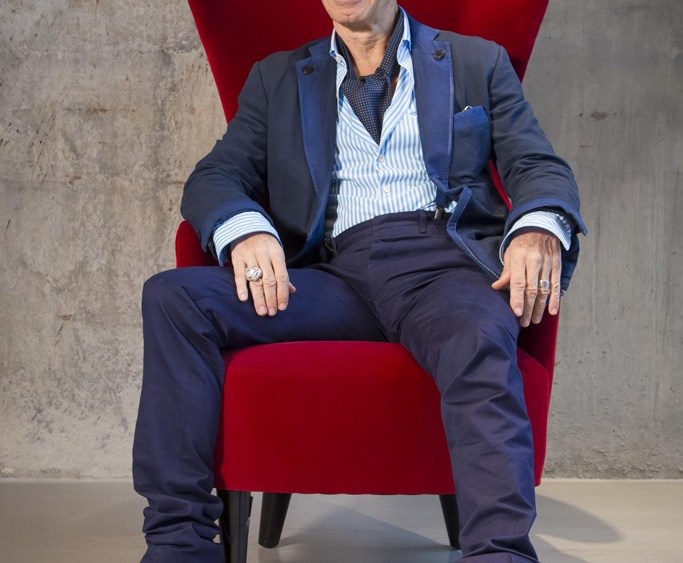 HONG KONG — As he makes his comeback here this week with luxury retailer Joyce, whose founder he credits with helping discover him in the Eighties, Romeo Gigli said he feels “a strong emotion” and — most importantly for him — a sense of freedom.

“I love it, I love it, because I don’t feel like I’m in a cage, I feel…I feel the freedom,” said the Italian designer prior to hosting an in-store cocktail Thursday. “It’s a strong emotion. You know, it was my work for 25 years, I missed something when I stopped to do it. I dedicated a long part of my life to that.”

The Italian designer, who gained acclaim in the Eighties for his romantic silhouettes and looks inspired by the Renaissance and his travels, was speaking as Joyce by Romeo Gigli, the private label he created for the Hong Kong-based multibrand boutique, made its debut here.

The fall collection went on sale here Tuesday with a bold, red window display. It will be available in Shanghai and Beijing next week, and in Venice in a pop-up store on Aug. 30.

Gigli spoke Wednesday to students from The Hong Kong Polytechnic University’s Institute of Textiles and Clothing and journalists about what inspired him and his previous collections. The designer will give a similar talk at Tsinghua University in Beijing on Monday and attend a cocktail and presentation of his pieces the following day at the Joyce store in the Chinese capital. He will also appear in Venice for the pop-up store opening next month.

Gigli, who in recent years has faced legal disputes over the right to use his own brand name, described the years since then as a forced sabbatical of sorts, during which he designed costumes for the stage, installed a Chinese exhibition in Florence, and took time to think about “the vision.” Away from hectic grind of designing full collections was, for him, “really energetic.”

Coming back with Joyce, he said, “I realized I could do fashion again in the right way, with freedom, with people looking in the same way.”

Gigli recalled that Joyce Ma, the founder of Joyce whose family has since sold the boutique, brought some of his first collections here before opening a store selling his brand. “She was the first in Asia to believe,” he said. “She believed in me before I became famous. It was like discovering me in some way.”

The designer spoke of his admiration for the open-mindedness, freshness, creativity, and ability to work toward a shared vision in Asia. “They work as a team, which is not so easy to find anymore,” he said of Joyce. “They try to have one vision for one project. That is not really Western, it’s Eastern — everybody trying to build something, trying to have the same vision, but everybody a part of their soul into it.”

Gigli will not stop there. He is working on the spring 2013 collection for the Joyce label, an ongoing collaboration. Although he said he doesn’t have other fashion projects in the works, he is designing pieces for Pauly Glass Factory, with which he first collaborated in 1997.