Glamour Hungary’s staff might need a refresher course on the value of true diversity in its pages.

A beauty editor for the monthly magazine, which is part of Conde Nast International and publishes through a deal with regional media company Ringier Axel Springer, this week told photographer Brenda Nasr in an exchange on Instagram that the magazine is “only allowed to have editorial with Caucasian models.” The exchange was prompted by Nasr pitching a fashion editorial she shot with a single black model to run in the title, which has since been picked up by Cosmopolitan Lithuania, a relatively nearby Eastern European country, and is set to run next month.

“In an industry like this, you typically can’t call people out, because you never know for sure,” Nasr said. “You might have a hunch that they don’t want something [for a specific reason], but you can’t call them out directly — but she just told me.”

Maróy, who’s been leading the title since its 2004 launch, apologized to Nasr in an email for “any offense to you, we absolutely did not mean to.” She characterized herself and all of her colleagues as “committed devotee[s] of human rights, democracy and female empowerment” and said the magazine is edited in line with those values. The editor went on to explain that the language of the beauty editor, who works on a freelance basis, was “ambiguous” and “rather awkward,” noting that English is not her first language.

“[The editor] simply meant that our beauty pages work on mirroring the reader and in a magazine like Glamour and in a country like Hungary they are practical, not inspirational,” Maróy wrote. She also shared several examples of “diverse” models and editorial, both beauty and fashion spreads that have appeared in Glamour Hungary since 2017.

“I would have been happy to hear her just reject [the decision], but she didn’t,” Nasr said. She noted that, in looking through the 11 editorials “even the darkest model was pretty light,” suggesting that perhaps the root of the rejection was her model was simply not Caucasian-looking enough. Most of the pages with non-white models offer them more as a feature of editorial focused on white models. 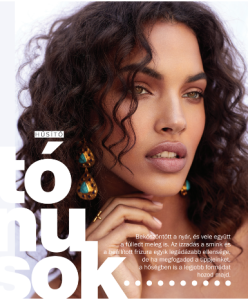 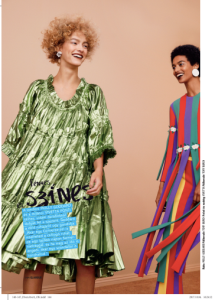 Wolfgang Blau, president of CNI, however came out strongly against the editor’s decision and reasoning. He called the comments “wrong, offensive and indefensible,” adding: “We at Conde Nast International unreservedly apologize for that.”

“We have come to the decision that the freelancer in question will no longer work for Glamour Hungary or any other Conde Nast title,” Blau went on. “All of our fashion and beauty editorial teams around the world not only embrace diversity but are actively promoting and celebrating inclusion in all its forms. This quite explicitly includes our Glamour team in Hungary, which has consistently promoted new models and talent of all backgrounds and races.”

Blau also said that CNI is “reviewing Glamour Hungary’s diversity policy together with the editor in chief as well as the team’s internal training programs for staff and freelancers so that this never happens again.”

Nasr, who is based in Washington, D.C., just spent the past four years living in Balkan countries like Croatia and Serbia, which, like Hungary, are predominantly ethnically white regions of Europe. But that doesn’t mean their people are uninterested in outside looks and cultures. In getting the shoot accepted for Cosmopolitan Lithuania, Nasr said the editor wanted it explicitly because the audience there “loves to see something new.”

“What I would really like to know is where the [Glamour] beauty editor’s statement originated,” Nasr said. “It seems clear to the edit team that these are the kind of looks [Glamour Hungary] wants. The person who was most ambiguous was the eic — the beauty editor wasn’t.”

Editor’s Note: This story was updated to include CNI’s statement after its initial publication.