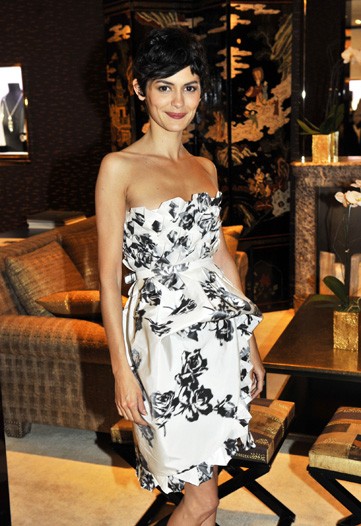 Dressed in a floral bustier frock from Chanel’s latest couture collection, Audrey Tautou cut a Thumbelina figure at the premiere of Anne Fontaine’s “Coco Avant Chanel (Coco Before Chanel)” — in which Tautou plays the famous couturier — held at a Champs-Elysées theater in Paris on Monday night.

Adapted loosely from an Edmonde Charles-Roux biography, the Warner Bros. film focuses on the early part of Chanel’s life and begins with her arrival at the orphanage where she grew up and learned to sew. It follows her arrival in high society: meeting Etienne Balsan, played by Benoît Poelvoorde, and then Arthur Boy Capel, played by Alessandro Nivola, and ends with her debut runway show.

After the screening, the cast headed to Place Vendôme for a cocktail in Chanel’s jewelry boutique. Tautou, who hails from the same region in France as Chanel, revealed she’s also a wiz seamstress, having been taught to sew as a child by her grandmother. “Obviously I had neither the taste nor the talent of Coco Chanel,” Tautou said, adding she would love to keep hold of the tweed jacket she wears in the film’s horse-riding scenes. Tautou’s outfits, by costume designer Catherine Leterrier and often adapted from men’s attire, were the envy of the rest of the female cast.

“I really understood Chanel’s role in freeing women of corsets,” said Marie Gillain, who in the role of Chanel’s sister Adrienne, had to wear the restrictive garment. “The corsets were OK. It was those giant hats that were the trouble,” countered Emmanuelle Devos, who plays the flamboyant actress Emilienne d’Alençon in the movie, for which Stephen Jones and Pippa Cleator created some 800 hats. Nivola said the moustache he grew to play Boy Capel drew some unexpected reactions. “I was living alone in the Marais, and I’d be walking along and people would say ‘Allo, Freddie Mercury,’” he laughed. Nivola, may also appear, quite by accident, in Jan Kounen’s Chanel film, also out this year. “I was having riding lessons and Anna Mouglalis arrived for her lessons with all the film crew for the making-of the DVD. They didn’t know I wasn’t in it,” he laughed, adding: “Maybe I’ve made it into both films.”