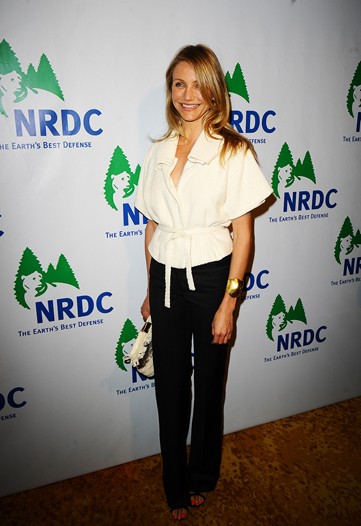 Which is something the NRDC has been touting for two decades, and the affair at the Regent Beverly Wilshire was no different. The meal was vegetarian and the wine was from organic and biodynamic Chilean vintner Lapostolle.

The event attracted eco-friendly guests including Robert Redford, Leonardo DiCaprio, Cameron Diaz, Linda Evangelista and Tom Ford. Jon Hamm of “Mad Men” ticked off a few of his conservation habits. “Fortunately, we live in Southern California and we don’t use a lot of air conditioning,” he said. “We open windows.”

In San Francisco the following night, Gucci and The Film Foundation presented a screening of John Cassavetes’ “A Woman Under the Influence” at the San Francisco International Film Festival. Post-viewing, everyone limo’d over to Tosca for a private reception honoring star Gena Rowlands.

“I was surprised at all the young kids in the audience whooping and clapping,” Rowlands said. “Half of them weren’t even born in 1974 when the film was released.”

Connie Nielsen was only nine at the time, but, she said, “‘A Woman Under the Influence’ is one of my all-time favorite films. I’ve watched it dozens of times.”

Nearby, Jennifer Newsom, whose husband, San Francisco Mayor Gavin Newsom, recently announced his run for California governor, swanned in wearing custom-made Gucci.  It was likely one of the brand’s few maternity frocks. “It’s a girl,” said the expectant Newsom, “and yes, we’ve chosen her name — but we’re not telling.”