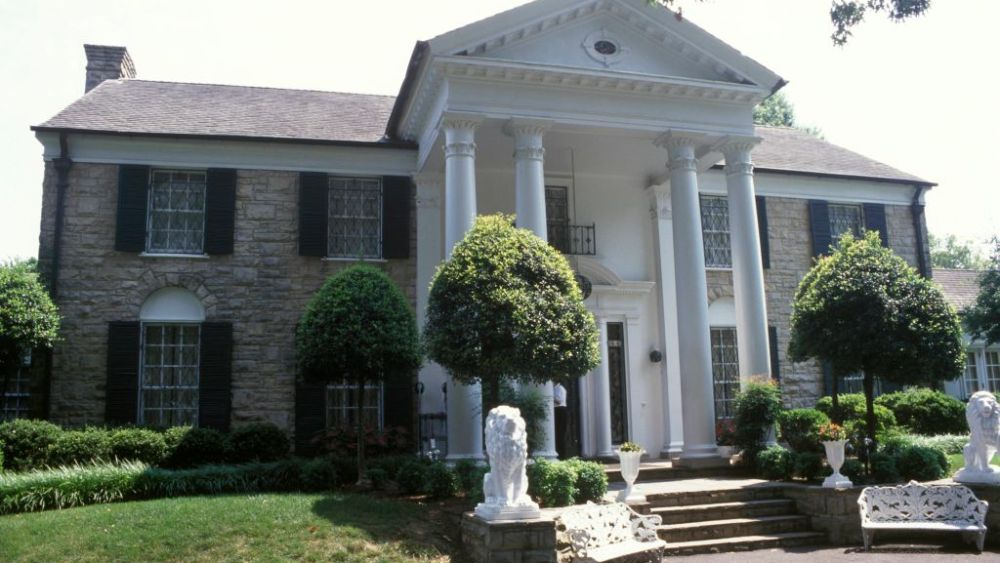 Elvis Presley, known as the King of Rock ‘n’ Roll, is estimated to have sold over one billion records worldwide, according to Guinness World Records.

Growing up as a young boy, he lived in a single family two-room shotgun house that his father, grandfather and uncle built. The humble abode would become a fraction of the size of his most famous real estate acquisition. With his fame and fortune, Presley purchased his home Graceland in 1957 for $102,500 in Memphis, Tennessee.

Some of his modifications to Graceland included a pink Alabama fieldstone wall surrounding the grounds, that now has years of graffiti. Presley also had Abe Sauer, a local artisan, design and build a wrought-iron gate designed in the shape of sheet music with silhouettes of him playing guitar.

The mansion also includes a kidney-shaped swimming pool and a racquetball court.

The exterior of the mansion is a Colonial Revival style, with a side-facing gabled roof covered in asphalt shingles. Two one-story wings are featured on the north and south sides of the property. The mansion has two chimneys, one on the north and south side. The central block’s front and side faces are veneered with tan Tishomingo limestome from Elvis’ birth state, Mississippi.

Graceland also features a shooting range and a full horse stable. Presley also had a meditation garden designed and built by Bernard Grenadier that he used as his thinking space.

The mansion boasts 17,552 square feet of space and 23 rooms, including eight bedrooms and four bathrooms. There is a first floor, second floor and basement. Elvis also had rooms for his trophies, which are now on display in the first-floor museum portion of the property. Known for his love of cars, the property also features an extensive garage.

Upon Elvis’ death in 1977, his father Vernon Presley served as the executor of his estate. Lisa Marie became the sole heir of the estate; her inheritance was held in a trust until her 25th birthday, on Feb. 1, 1993.

After Elvis’ death, Graceland cost around $480,000 a year to keep up, according to LA Times. Faced with estate’s expensive costs, Priscilla came up with a plan to turn it into a business opportunity.

She hired a chief executive officer to turn Graceland into a museum, making it a tourist destination. Graceland opened to the public in 1982, attracting around 300,000 visitors throughout the year.

Visitors are not allowed on the second floor, which is where Elvis’ body was discovered when he was pronounced dead in 1977.

In 1968, Priscilla gave birth to their daughter Lisa Marie Presley, who spent her early years at Graceland until her parents’ divorce in 1972, when she moved to California with her mother. She would frequently visit throughout her childhood.

The last member of the Presley family to occupy Graceland mansion was Elvis’ aunt Delta, who died in 1993.

Lisa Marie Presley’s estate has full ownership of Graceland mansion and her father’s personal belongings ranging from costumes to cars. Before her death, she made the mansion permanently available for tours.

In 2006, Graceland was declared a National Historic Landmark and now attracts 650,000 visitors annually. The mansion is so famous that’s even inspired a wedding chapel in Las Vegas.

The mansion itself is expected to pass onto Lisa Marie’s three children, including Riley Keough, 33, and twins Harper Vivienne Ann Lockwood and Finley Aaron Love Lockwood, 14. Presley’s son, Benjamin Keough, passed away at 27.

Lisa Marie Presley passed away on Jan. 12 at 54, hours after being hospitalized following an apparent cardiac arrest. She was the only daughter of the late music legend Elvis Presley and Priscilla Presley.