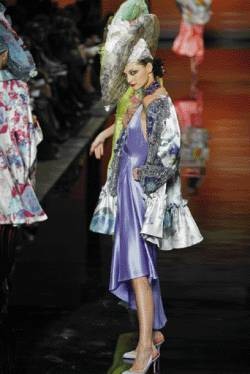 As the Paris spring couture season rolled along, Emanuel Ungaro showed a collection that, at its best, was opulent and dramatic, while Christian Lacroix’s dazzler had a romantic lyricism. Meanwhile, Julien Macdonald offered sleek chic with a touch of the early Sixties for Givenchy.

Emanuel Ungaro: Decisions, decisions. Clearly, Emanuel Ungaro experienced a Hamlet moment while designing his spring haute couture collection, one that remained unresolved at show time. His presentation on Wednesday had two distinct sides, and they delivered wildly different results: The good was spectacularly so; the balance, confusing and bizarre.

Ungaro seems at war with himself, continually grappling with the yen to be hip. How else can one explain the smoking motif he threaded throughout the collection? No, not a take on the tuxedo, but an image of a cigarette dangling from bright lips that looked like the kissin’ cousin to the Rolling Stones’ decadent tongue. Ungaro repeated it over and over, large and small, in embroideries and appliqués, and inexplicably so, since it looked neither new nor pretty. Nor can one imagine the circumstances under which a woman would shell out five figures for a frock so adorned; couture is, after all, a big leap up from a concert T-shirt. Then there were the harem pants, bigger, bolder, more dreaming-of-Jeannie than ever, and an odd interlude in which the designer’s signature pastiche of color and texture was anchored by big, floppy dandy vests.

But suddenly, the focus would switch, to a world of riches and wonder, the kind of rarefied world Ungaro’s couture customers long to conjure through fashion. And why not, if evocative embroideries can take women somewhere wonderful, if only for a big night out? Then the grand, sweeping hats, veiled, flowered and tilted just so, made dramatic sense, and one became engaged in the beauty of Ungaro’s work. He showed relative discretion early on, with a series of colorful satin gowns under loose, printed coats and jackets, and with vampy-chic black dresses, some with backs opened down to there.

But soon, restraint gave way to all-out opulence, as Ungaro had his way with all of the lavishness he loves. Bustled gowns under finely constructed jackets harkened to the romantic days of old, while a pair of high-fluff, face-obscuring numbers gently mocked haute conventions. But the designer really struck gold not with voluminous ballgowns, but with languid, richly embellished tops and skirts under romantic ribbon-laced bed jackets. To be or not to be smitten? Rhetorical.

Christian Lacroix: Poetic perfection. Now, before you hurl this newspaper across the room, please — stay with the argument a moment. Surely the fashion-as-art accolade is not one to be tossed about recklessly, nor is it a notion most of us choose to embrace. Lord knows, nothing revs up a fashion editor’s fear factor — and arrogance — like that fretful affront “wearable art.” Yet some clothes, the rare piece, the rare collection, take the notion of fashion somewhere else. And to be frank, maybe such clothes shouldn’t be called fashion at all, as they have nothing to do with working trends or fitting into even the most selective of circles.

While one might not dare to call the couture collection Christian Lacroix showed on Tuesday art, even the stuffiest of observers would have to acknowledge it as something special. Lacroix has a wonderful way of merging grandeur with gentility, and, in this collection, he did so with incredible fancy and lightness of heart. It’s difficult to discuss the clothes without descending into verbiage — poetic, lyric, evocative — we dismiss as schmaltz, as if a sense of wonder were a character flaw. But is angst preferable to joy? Cynicism to romance? Certainly not in Lacroix’s book.

As always, for spring, the designer piled whim upon whim: a touch of the circus, the ingenue, even the tart; nods to those days when expressions of high chic could cause a girl to lose her head — and she dressed up anyway; and even a Vive la France/Yankee Doodle moment in red, white and blue. And of course, he tied it all up in pools of ribbons, laces and embroideries, all worked in mysterious ways.

Yet what made this collection unusual for Lacroix, was that one never wished for that little moment of restraint — that calm amid the frenzy. That’s because, for all their dream-like splendor, these clothes were controlled and, yes, wearable. Lacroix’s coats and courtly jackets could, dressed down, see the light of day, and not a single piece of his remarkable evening wear would get lost in the red-carpet crowd.

Givenchy: Julien Macdonald’s future at Givenchy is iffier than a high school boyfriend’s. The fashion world is buzzing that he’s soon to be dumped for Hedi Slimane, and a denial from the house has done nothing to squelch the relentless speculation. All of which must certainly have upped the pressure quotient of producing his spring collection for the house immeasurably.

Under the circumstances, Macdonald performed gamely. After last season’s Vegas-ready debacle, he reined in his flamboyant urges and laid the framework for a calmer approach to couture. Instead of feather headdresses and catsuits, he concentrated on and delivered clothes that, for the most part, looked smart, all in a palette of black, white and beige. He went for sleek, nearly dangerous, suits for day, while offering a broader range of evening looks, from a Fifties-style party frock to bejeweled, goddess-worthy gowns. Perhaps because restraint does not come easily — and because of the name on the door — he delivered these with the occasional Audrey Hepburn reference.

Was it enough? Macdonald still has a way to go before he reaches the realm of the accomplished couturier, and whether he can grow into the post remains to be seen. What is certain, however, is that even the most skilled couturier needs all of the tools of the craft readily at hand, and it is not clear whether, at this point, Givenchy provides the resources and structure necessary to support success at the haute level.