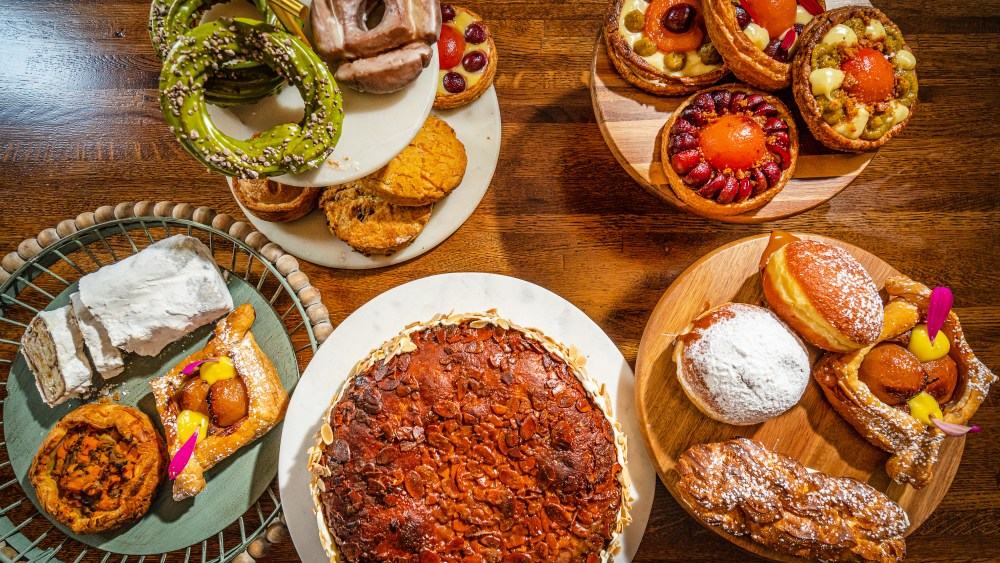 “Two years ago, I told him if you come on board, I promise that I’ll open a bakery with you. So now I’m delivering on that promise,” says Baxtrom, who met Grunert while both were working in the kitchen at Blue Hill at Stone Barns.

Baxtrom scooped up the corner space before COVID-19. “I literally poked my head in thinking, man, it would be nice to have this space, and then a week later they closed. So that just kind of seemed like the stars telling me to do it,” he adds. “I don’t know how I became the neighborhood restaurant guy, but I really wanted to double down on that and have something where you can genuinely see yourself coming multiple times a week.”

During the height of the pandemic, Baxtrom and his team opened a “Trading Post” in Olmsted’s private dining room, where they began selling Grunert’s breads and jams and other provisions. “The neighborhood was visibly upset when we closed it, so we just moved it a block and a half down the street,” Baxtrom says.

The concept was Tartine meets Breads Bakery, in Brooklyn — and accessible to all. “I don’t want to run out of anything here,” says Baxtrom, adding that he hopes customers will come in, sit and stay awhile.

At night — and opening next year — the space will turn into a different restaurant conceptualized by Baxtrom. Like with his first two restaurants, the space was built with the assistance of his father. It’s a family project through and through: the bakery was named for Grunert’s mother, and the forthcoming restaurant will be named after Baxtrom’s mother. The design aesthetics are also reflective of the familial inspiration.

“Alex is Austrian, so [Evi’s] is black and white, it’s cleaner lines. It’s old school light fixtures,” Baxtrom says. “Whereas the other side, my mother was a grade school teacher for 30 years, so there’s more primary colors.”

There’s also a kid’s corner, and a “Stroller Valet” out front. “Like a bike lock system,” he adds. “So you can tie up your strollers up front and be comfortable rolling up with two kids in a stroller, leaving it out front and enjoying a meal.”