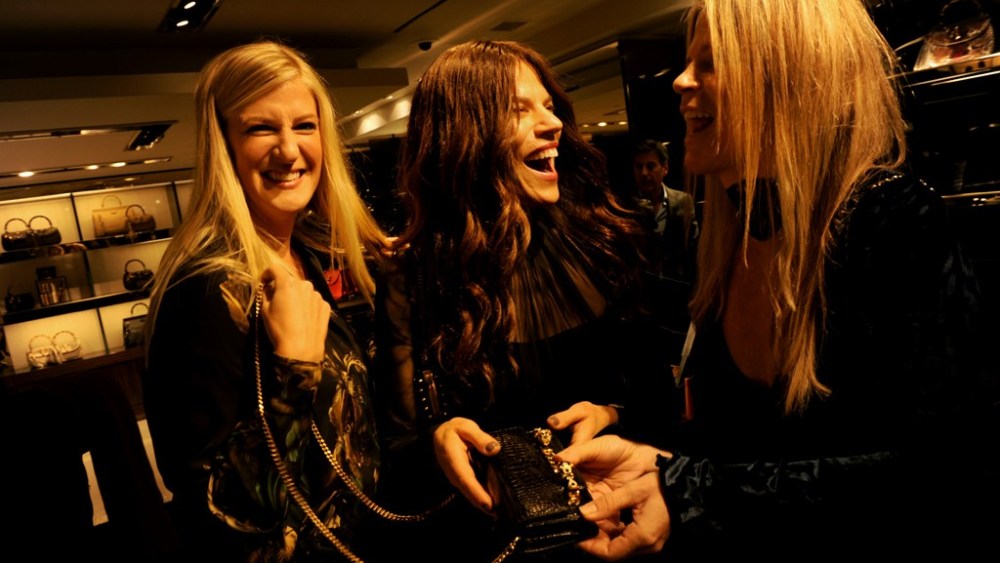 Having touched down at JFK mere hours earlier, most New York-based fashion folk curled up in bed early Thursday night to stave off jetlag and post-collections fatigue. A peppy few who had the wherewithal to throw on a pair of heels for the evening turned up at Gucci’s Madison Avenue boutique, where the fashion house held a cocktail party to toast its “Icons of Heritage,” a trio of Gucci handbags that have been revamped in recent years — the New Bamboo, Jackie and Stirrup bags. Black-and-white archival Vogue photographs from Irving Penn and Arthur Elgort, among others, featuring the purses hung on the walls of the newly renovated store. One, a 1971 Henry Clarke print of Veruschka, floppy hat on her head, logo-laden bag on her arm and two leashed pups in tow, was auctioned off with the proceeds benefiting Art Production Fund. Ten percent of the fall merch sales snapped up by shoppers at the event would also be donated to the nonprofit. Cofounders Yvonne Force Villareal, Doreen Remen and Casey Fremont were cohosts for the affair.

“We celebrate production and fabrication at its highest level and so does Gucci,” Villareal said of the partnership. “I mean, look at these artisans they sent.”

She motioned to a phalanx of craftsmen flown in from Gucci’s Florence leather atelier who were stationed around the room, demonstrating the bag-building technique. Guests, including Zani Gugelmann, Erin Fetherston, Adam Lippes and Amy Sacco, hovered over the workers’ tables to watch them stretch, stitch, spray and slice the range of skins and exotics — glossy ostrich, croc, painted python and plush calfskin.

“It really is quite a craft,” Helen Schifter said, taking in the blow-by-blow. “It certainly takes patience.” She wasn’t kidding. Each Jackie, Bamboo and Stirrup bag requires between seven and 13 hours to complete by hand. The New Bamboo, which one technician was fashioning in a hand-painted python, is hand-assembled from 140 components.

“When you go shopping and you see these bags, they’re beautiful but you don’t realize all that goes into it,” Remen said. “This is what luxury is all about.”