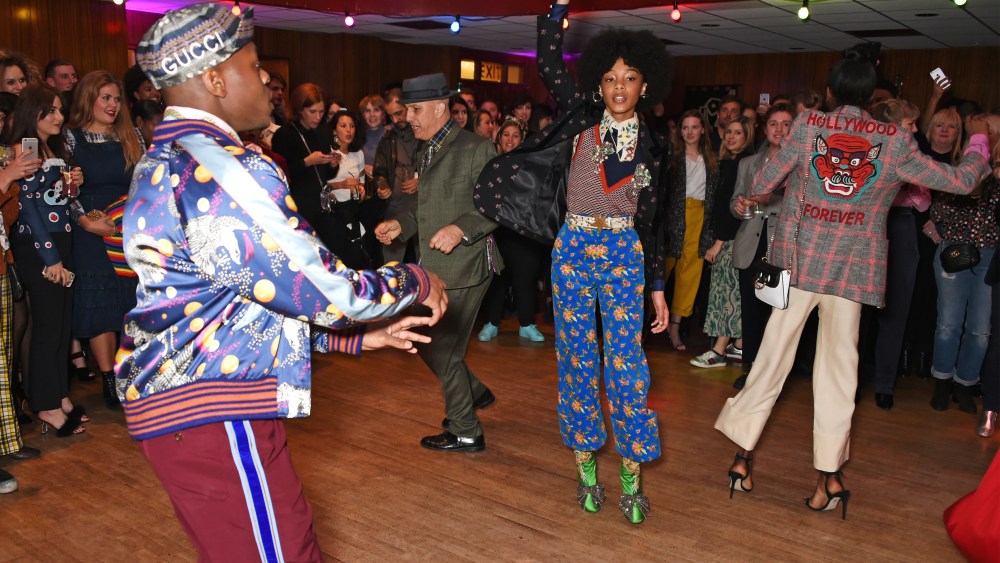 DANCE OFF: A self-proclaimed Anglophile, Gucci’s Alessandro Michele returned to London on Thursday night to celebrate the label’s pre-fall 2017 campaign with i-D magazine.

Called “Soul Scene,” the campaign was met with approval from the industry for its statement on diversity. Launched earlier this month, it features people of color and draws inspiration from Northern Soul, a music and dance movement that developed in northern England in the late Sixties.

Gucci brought the campaign to life by hosting the party in the home of Northern Soul, the historic Mildmay Club in North London, where the campaign was also shot by Glen Luchford. The space, which came complete with a stage with sparkly foil curtains, disco lighting, retro-striped wallpaper and pink bow-engraved walls, transported guests back into the Swinging Sixties.

The dance floor quickly filled up with guests who moved to the beats of Northern Soul, encouraged by ongoing performances from dancers clad in sparkly, colorful Gucci pre-fall outfits.

The event drew a young, alternative crowd of up-and-coming designers, musicians and actors, the kind that grace the pages of i-D. Whether they were dressed in Gucci or not, their flamboyant styles and command of the dance floor fit with the label’s magpie aesthetic.

“Take me to the stage,” said Sharmadean Reid, owner of the hip nail salon WAH Nails as soon as she entered the club.

British actress Sai Bennett was enjoying the throwback to the past. “I’m such an old soul that this campaign really spoke to me. These days, everything is so digital that it’s so important to have a night like this,” said Bennett, who is best known for her roles in “Trapped Angel” and “Mr. Selfridge” and who is filming a new TV show in the U.S.

Dressed in a printed pajama-inspired matching set by Gucci, Bennett roamed the room snapping pictures with the likes of Greta Bellamacina, a young poet and filmmaker who compared the nostalgic atmosphere of the party to going to prom, and Billie JD Porter, a politically minded documentary filmmaker and TV presenter. Porter is working on organizing a daylong summit in May to discuss political engagement in the U.K. and encourage young people to exercise their right to vote.

Up-and-coming Turkish designers Dora Teymur and Dilara Findikoglu were also in attendance. Findikoglu, who was dressed in a silver jumpsuit of her own creation, has been seeing her brand grow with retailers such as Selfridges, Nordstrom and Moda Operandi. She is also plotting a high street collaboration.

Other guests included stylists Anna Trevelyan and Katy England, singer and model Selah Marley, Pam Hogg and artist Coco Capitán, who recently collaborated with Michele on Gucci’s fall 2017 collection, printing phrases such as “Common sense is not so common” over signature logo T-shirts by the label.

Despite the nostalgic mood, Gucci also nodded to the future, providing guests with specially designed Samsung headsets with which  they could get a 360-degree view of the pre-fall 2017 campaign video. The film will also be available on the Gucci website and app, where users can watch the virtual reality version on their mobiles.

Next up for the label will be the resort show at Florence’s Pitti Palace on May 29.