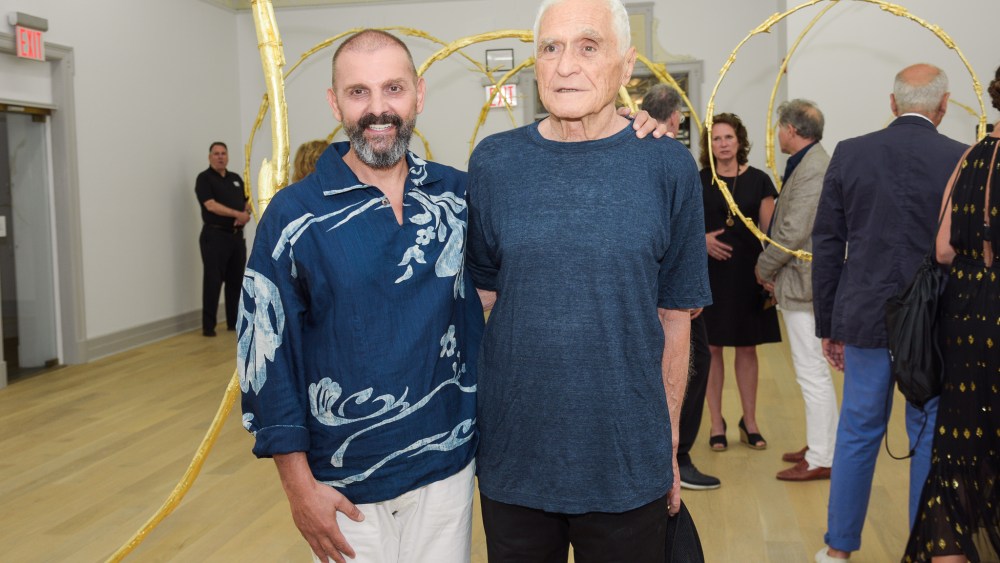 “I live in L.A. and I keep extending my trip for these weird social events. There’s one after another,” said artist Yung Jake. “They space them out in a way where I could stay another week. I’m just on this constant marathon of these rich white people events.”

In case there was any confusion, he’s talking about summertime in the Hamptons.

Yung Jake, a Hamptons native, has been using the time in between to draw, read, chill and negotiate a project-in-progress; on Friday night, he stopped by a preview of Ugo Rondinone’s solo show at the Guild Hall of East Hampton during the arts organization’s annual summer gala.

The social season out East hit a bit of a peak this weekend, and amidst all the nearby political drama, Rondinone’s work offered something of a respite. Early Friday evening during what would otherwise be happy hour, attendees — dressed in their brightest colors to oblige the “radiant attire” dress code — moseyed down Main Street and into a preview of his show, “Sunny Days.”

One wing of the cozy museum houses Rondinone’s large scale “target” paintings of concentric yellow paintings, each given a long title corresponding to the day it was made — “achterjunizweitausendundzwölf,” etc. — while the other wing houses his circular sculptures of golden branches — “the sun at 1pm, 2019,” etc. The latter proved to be the most popular area for the crowd to congregate and selfie.

The New York by way of Switzerland artist’s works were a bipartisan sight to behold. It’s been a big weekend for yellow circles out East; over in Water Mill the day before, a New York Times reporter had canvassed SoulCycle devotees about the boutique chain’s connection to Stephen Ross, who had hosted a lunch for President Trump earlier that day.

“It’s a solo exhibition; a happy exhibition. I hope people of the beach enjoy an exhibition in the summer,” said Rondinone of his own work as he got chased around the exhibition space to oblige various photo requests. His partner, John Giorno, hung nearby with a smile on his face as he caught up with fellow artist Robert Longo, sunglasses still on.

Rondinone made his way into a corner of the gallery plastered with colorful drawings, not his own but the work of various local children tasked to create their own interpretations of the sun.

“I’m really happy with how it turned out,” said the artist of the collab. “It’s something that will go on in different cities, just to unite the children of the world.”

“I love Ugo’s work,” said Stacey Bendet, noting that Rondinone’s colorful rock sculptures have been a color inspiration in her collections for several seasons. “I have a house in East Hampton, so I just walked over to see his work, and came in sunny-day theme.” After spending July in Malibu, Bendet was out East for the rest of the summer, sort of. “I’m working in the city during the week on my spring lines. Designers don’t really celebrate August summer,” she added.

After soaking in the good vibes of Rondinone’s work, many in the crowd walked next door to Mulford Farm for dinner, where Bob Colacello took over emcee duties for the evening. The gala honored trustee and museum committee chair Michael Lynne, in memoriam.