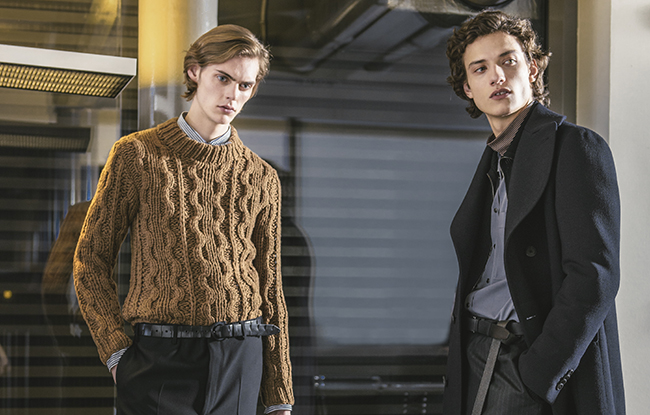 During his lifetime, Salvatore Ferragamo was renowned for his design innovations that established his company as one of the world’s leading luxury brands. Now Guillaume Meilland wants to bring some of that same innovative spirit to the fashion house’s men’s wear.

“As soon as I joined the company I tried to observe the legacy of the house and I realized that the authentic spirit of Salvatore Ferragamo is truly alive in the brand,” said Meilland, revealing that he was particularly attracted to the company founder’s innovative attitude, his search for the perfect fit and the sense of ease he used to inject in his creations. “I want to transmit the same things in the garments I design — as well as Paul Andrew is doing in the women’s shoes,” explained Meilland, who served as head of men’s sportswear design at Yves Saint Laurent in 2007 and then, the following year, men’s senior designer at Lanvin.

Meilland also said the upscale craftsmanship that characterizes the Salvatore Ferragamo label will be constantly highlighted in his collections for the brand. “It’s great to work so close with artisans here in Italy where we have access to those able to deliver the most perfect constructions and gorgeous fabrics, which have to be at the core of everything we do,” said the designer.

Rather than looking at a specific theme for inspiration, Meilland said his debut collection “blended different influences.” As an example, he pointed to a sketch of Paul Klee portraying a view from a window of a street with different people walking by. “It’s the diversity of the people in the street who captured me. It’s the same diversity which a young Salvatore Ferragamo found when he arrived in the States,” Meilland said. “I imagined this young man hitting the big city armed with his natural, effortless elegance.”

A sense of surprise is infused in the clothes, many of them crafted from “materials which at the first sight look like something different,” he said, mentioning leather with a rubber-like aspect; silk knitwear that looks like corduroy, and an embroidered cloth in a snakeskin effect.

Checks and traditional British patterns are juxtaposed with solids in the lineup and centered around a classic color palette of blacks and grays with pops of yellow, pink and bright blue.

According to Meilland, tailoring is presented in two main silhouettes: “fitted and elongated or boxy.” Along with updated suits, the collection includes rich knitwear, as well as a wide range of leather options, ranging from bonded jackets to shearling coats.

“As a strong leather-goods company, we aim to expand the use of leather in the men’s ready-to-wear collection,” said the designer.

“Two footwear styles, which are revisited men’s classic shoes with touches of technology” complete the lineup, which also includes bags. “We played with sizes. They will be very small or huge,” Meilland said.