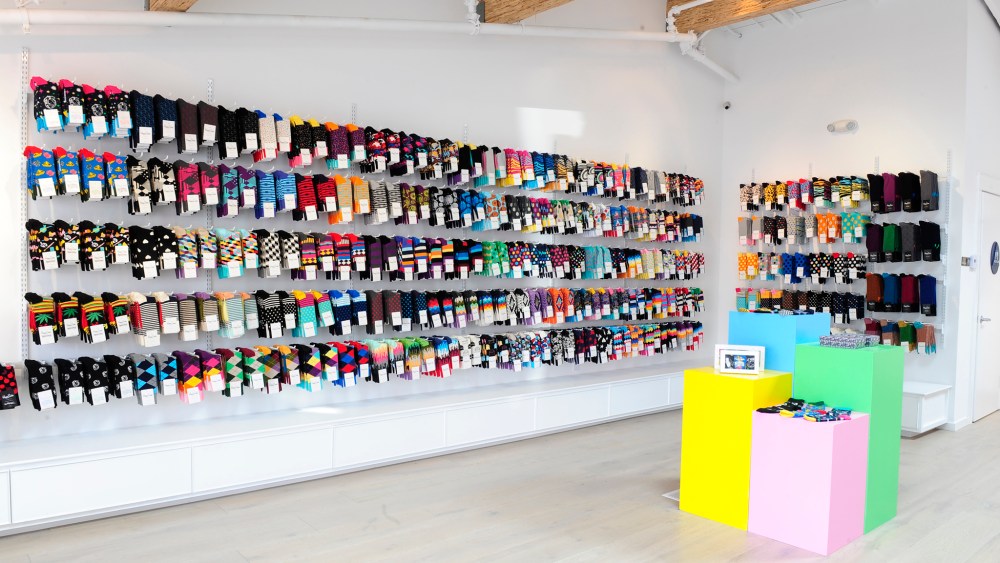 The company, originally set to debut a store on Abbot Kinney Boulevard in the spring, bowed this week after construction delays thwarted the original plans.

Happy Socks moved into about 1,000 square feet of selling space, located in a historic Venice, Calif. bungalow built in 1915. The historical building required certain components of the exterior to be kept in tact. But the company finally moved forward on its opening, showing off the breadth of its collection of socks, underwear and loungewear for men, women and kids.

“For us, Abbot Kinney was the first place that we really wanted to open [on the West Coast],” said cofounder and ceo Mikael Söderlindh. “It, a little bit, resembles European shopping. You park your car and you walk around. It’s also a place where a lot of tourists visiting L.A. will go and you have a strong crowd going to Abbot Kinney.”

Söderlindh started the company in 2008 with creative director Viktor Tell.

Söderlindh said the New York location, despite doing strong sales per square foot, is small and the size there informed the decision-making process for when the company shopped for larger space in Venice. He would not provide details on New York’s financial performance or the projections for Abbot Kinney.

Happy Socks establishes its brick-and-mortar presence on the West Coast, which has seen the meteoric rise of San Clemente, Calif.-based sock brand Stance Inc. The success of Stance has fueled interest from apparel players looking for some share of a market that’s built brands out of what are essentially commodity items.

Söderlindh is confident Happy Socks can hold its own on the West Coast and elsewhere.

“We were the first in the market doing [this] globally,” he said of the company’s competitive advantage.

At the same time, Happy Socks continues to look for additional areas of market penetration Stateside via the direct-to-consumer store model.

More stores can be expected within the next year, Söderlindh said, but the timing and specific cities will depend on the permitting process and what real estate locations — whether that be shopping areas or stand-alone storefronts on a street — become available.

Cities being eyed include Chicago, San Francisco and Palo Alto along with perhaps another location in New York.