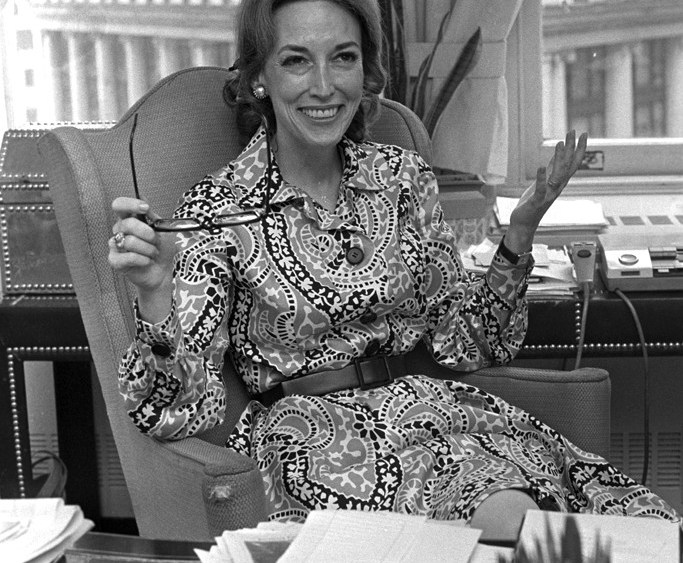 She really was That Cosmopolitan Girl. Helen Gurley Brown, writer, publisher and businesswoman, died in New York Monday at age 90. As the author of “Sex and the Single Girl” and the longtime editor in chief of Cosmopolitan magazine, a job she held for more than 30 years, Brown tried to change women’s images of themselves into those of autonomous people, who were professionally and personally capable of anything a man could do, and who should have a similar degree of sexual freedom, which she saw as signally empowering. Starting as a self-proclaimed “mouseburger,” she turned herself into a glamorous career woman and spent her career telling other women exactly how they could do the same.

On learning of her death, New York Mayor Michael Bloomberg said, “Today New York City lost a pioneer who reshaped not only the entire media industry, but the nation’s culture. She was a role model for the millions of women whose private thoughts, wonders and dreams she addressed so brilliantly in print. She was a quintessential New Yorker: never afraid to speak her mind and always full of advice. She pushed boundaries and often broke them, clearing the way for younger women to follow in her path. I was honored to be her friend and know how deeply she cared about the city she called home. We will miss her, but her impact on our culture and society will live on forever.”

“She was always smart, on, knew what she was talking about,” recalled Jann Wenner. “Justifiably a legend you had to admire. At the beginning of Us Weekly, I sought her out for her advice, and she gave me about a half a dozen tips, from simple to shrewd, and I used them all. She was one of the great players in the golden years.”

Her beginnings, however, were singularly unpromising. Born in Green Forest, Ark., to Cleo and Ira Marvin Gurley, she lost her father in a freak accident when she was only 10. The family plunged into poverty. When she was 15, she, her sister Mary and her mother moved to Los Angeles, where Mary soon contracted polio. In L.A., Helen attended and graduated from John H. Francis Polytechnic High School. She spent a semester at Texas State College for women, then returned to California and went to Woodbury Business College, graduating in 1941. She wrote about having bad acne and about the numerous jobs she had early in her career, which included stints at the William Morris Agency, MCA and the Jaffe talent agency. It was on her 17th job, as a secretary at the Foote, Cone & Belding advertising agency, that her boss finally noticed her writing ability and asked her to write copy. Soon, she was one of the highest-paid copywriters around. In 1959, she married movie producer David Brown, who was responsible for “Jaws,” “The Sting,” “Driving Miss Daisy,” “The Verdict” and other films. She often said that her independence and financial success were a big part of what attracted him to her. Brown died in 2010.

It was Brown, in fact, who encouraged his wife to turn stories of her single life into “Sex and the Single Girl,” which was published in 1962 and was an immediate bestseller, remaining on the lists for a year. Warner Bros. bought the film rights for what was at the time the highest price ever paid for a nonfiction book, and made it into a 1964 movie with Natalie Wood, Tony Curtis, Lauren Bacall and Henry Fonda. Her other books included 1964’s “Sex and the Office,” which was another bestseller; “Sex and the New Single Girl” in 1970; “Having It All” in 1982, and “I’m Wild Again: Snippets From My Life and a Few Brazen Thoughts” in 2000.

In 1965, she was given the chance to revive Cosmopolitan, a Hearst general-interest magazine that had been languishing. She did just that with sexy cover shoots — for decades by Francesco Scavullo — racy stories and all manner of self-help narratives that can be seen as the precursor of the makeover shows that have become such a staple of magazines and television. She was a pioneer herself as an editor-as-celebrity, before Oprah Winfrey and Martha Stewart, since she was already famous when she took over Cosmo.

“I used to have sex all to myself; now I have to share with the Ladies’ Home Journal,” she told WWD in 1995. She made a similar statement about Glamour. “Sex is sex,” she added in the 1995 interview. “You can’t invent any new variations. They’re all in the Kama Sutra. It is a challenge to find new, fresh approaches to articles about sex. The old ones aren’t so bad. Orgasms — we run that story at least once a year. It doesn’t hurt to recycle them.

“There really is a Cosmo woman. She’s someone who loves men and loves children, but doesn’t want to get her identity from someone else. She probably does some kind of work. We tell her that life is full of wondrous things, but nobody gives you nothin.’

“People credit me with having a dream or some kind of vision,” she continued. “In 1965, I happened to fall into the kind of work I was meant to do. I’d just written ‘Sex and the Single Girl,’ and I was getting all this mail. My husband, David, said, ‘If you had a magazine, you could answer all your letters.’ I drew up a plan. It worked from the very first hour. I’ve never deviated from it.” They went to Hearst with their idea for their own magazine, Femme, but Hearst offered her their Cosmopolitan opportunity instead, and she never looked back.

Then Brown said, “If I have any regret, it’s that I never learned how to play more. Work for me is better than play. I don’t know how to play real well, but I do know how to work.”

In 1997, Brown was moved upstairs to make way for Marie Claire editor Bonnie Fuller as editor in chief. Brown became the director of the magazine’s international editions.

Kate White, now the editor in chief of Cosmopolitan, got her copy of “Sex and the Single Girl” in high school from her mother. “She told me, ‘Don’t do anything in the book, but try to be like Helen,’” White recalled of her mother’s advice. “She wanted women to take the bull by the horns and live their best lives and enjoy being single and enjoy sex and not be ashamed. Women found that incredibly liberating.”

Ellen Levine, who is now the editorial director of Hearst, met Brown for a job interview at Cosmopolitan in the late Seventies. The woman who greeted Levine then hadn’t yet transformed her office into the famous pink lair, but Brown’s legend was already outsized. “She gave women a permission and a blessing to be who they wanted to be and not feel any guilt,” she said “We all pinned ‘Sex and the Single Girl’ up in our dorm rooms.”

Levine worked at Cosmo until 1982, but the two women, whose birthdays were only a few days apart, had lunch together for years after, and she said Brown was still recognized everywhere they went.

“If you went out on the street with Helen, whether you were in Arizona or on 57th Street, women would roll down their car windows, and they’d yell out ‘I love you’ and ‘You made my life different,’” Levine said. “She was very well-known and very loved all around the country.”

Brown and her husband, who had no children, have left a substantial legacy in the form of a $30 million gift to Columbia and Stanford Universities, which created the David and Helen Gurley Brown Institute for Media Innovation, which is housed at the Columbia Graduate School of Journalism and the School of Engineering at Stanford. David Brown attended both schools. The journalism school noted that the $18 million it received was the largest donation in its history.

“Her late husband, David, was an alumnus and a longtime, loyal member of the school’s Board of Visitors. The David and Helen Gurley Brown Institute for Media Innovation is the final achievement of her remarkable life. We are grieving, but we console ourselves with the knowledge that Helen’s legacy will live on forever here, through the institute.”

Christie Hefner, former chief executive officer of Playboy, recalled, “I met her when I was just starting off at Playboy and she came to see my father. He was extremely supportive and encouraging at a time when a lot of people were not. She was also unbelievably gracious to me. She was one of the first people in the industry that was very welcoming. She hosted a couple of lunches for me, to meet people in the industry.

“I was always very impressed by the vision she had for taking Cosmopolitan beyond the U.S. That was an important part of the strategy we pursued at Playboy. There were not, in those early years in the Eighties, a lot of American magazines that thought about becoming global brands. She was a trailblazer.”

Jane Pratt remembered meeting Brown “when we were both on a panel on the ‘Geraldo’ show in 1989. She wrote me the nicest handwritten note afterward. She thought I had so much promise and gave her so much hope for the future of magazine publishing. I ended up hiring some people that worked for her and back and forth. I think we both really cared more about furthering these young women in their careers more than whether they worked for Jane or Cosmo.

“Her style was really bold. I remember this one dress — classic Pucci with lots of pinks and turquoise. When she would talk to you, she would curl up in her chair. Basically, she would purr like a cat.”

Jennifer Scanlon, who wrote a biography of Brown three years ago, said, “It’s hard to overstate how important she was to women’s lives in the United States in the postwar period. She was determined women take control of their financial lives because she believed that was the key to their independence and their happiness.”