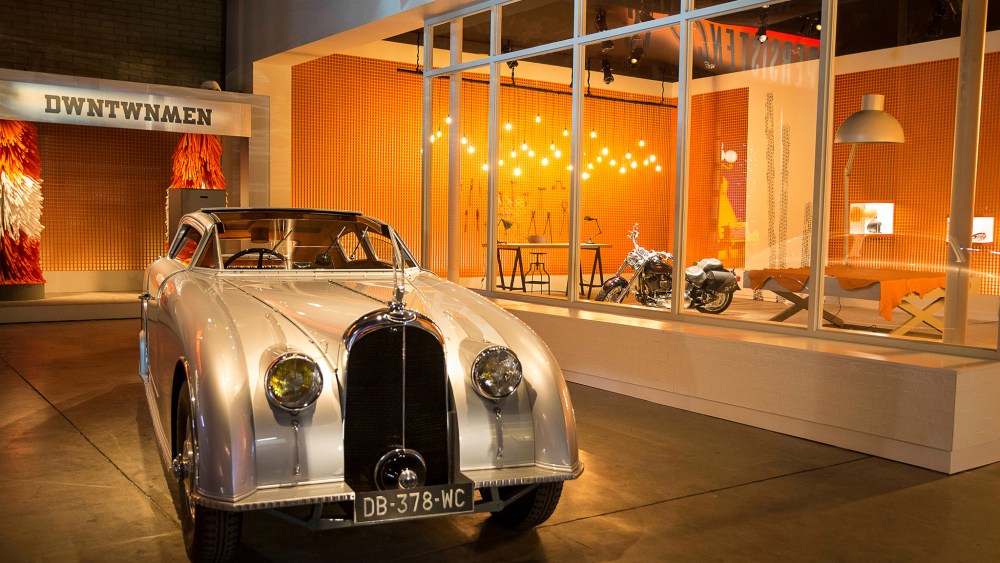 LOS ANGELES — Hermès is no stranger to Los Angeles, but the storied house is set to make its biggest splash yet tonight with its “Dwntwnmen” event.

Held in and around a 60,000-square-foot warehouse on the outskirts of the buzzy downtown Los Angeles Arts District, the event will fete the men’s spring 2017 collections via an outdoor runway show featuring several new-for-L.A. items (including sneakers and T-shirts, natch), and a custom-built environment celebrating color and craftsmanship.

Under the aegis of Hermès men’s artistic director Véronique Nichanian, the “world of Hermès” is brought to life with artwork by British artist Anthony Burrill, who conceived the colorful Dwntwnmen logo and the slogans “I Like It” and “What Is It,” as well as those denoting each area.

Those spaces start with an anthropomorphic photo corner for arrivals — Hermès is not one to splash its logo on any old step-and-repeat — then lead into a street-turned runway flanked by the existing buildings’ graffiti. Notable details include a colored light installation made to decorate the music agency that flanks the runway and custom-painted wooden stools (for 900 seated guests and roughly 300 standing) that match the citron and cobalt of the brand’s logo.

After the show, industrial garage doors open to unveil the indoor areas: a basketball-court-inspired game room with ping-pong, shuffle board, ski ball and video games; a “garage” featuring a one-of-a-kind Thirties Voisin car with custom Hermès upholstery and a Harley-Davidson also covered in Hermès leather; a one-off area featuring more custom items as well as a Parisian craftsman doing demonstrations; a “Please Do Touch” cube inviting guests to touch the various materials Nichanian uses in her collections; a “Make Time Your Own” room where actual customers have loaned their leather jackets (and one pair of leather pants) accompanied by narrations of their experiences; “Say Something,” which celebrates 70 issues of in-house magazine Le Monde d’Hermès, and a “Silk Records” room where each 12-inch record jacket features a different men’s scarf pattern representing 12 years of collections. Many of these areas feature bars, comfy seating and interactive elements such as being able to play each record on a turntable, or being able to text messages that will be projected onto models’ images wallpapering the space with cartoonlike speech bubbles.

Throughout there are also “Color Spot” displays and the “Sun Monsieur” wall that has been at events in Tokyo, Paris and Chicago, showing the 144 pieces that compose a suit and the 44 that make up a shirt (it’s been a popular Instagram shot, and every corner of the event is destined to become an Instagram hashtag).

That’s not the only thing that’s tech-friendly — each guest will receive a personalized carved and hand-painted wooden token containing an RFID chip that enables them to use the photo booths and other activations (photos, for example, are then sent to each guests’ personalized web site).

The evening continues in a landscaped outdoor space replete with taco stands, French delicacies and a performance by a surprise musical guest (hint: it’s Millennial-friendly).

While the event couldn’t be farther from Rodeo Drive, the Hermès flagship there, as well as its South Coast Plaza store, has been decked out with the fashion show merchandise taking over the first floor for two weeks, in addition to a special landing page on the Hermès web site.

While this is no populist see-now-buy-now event, the brand messaging is that of downtown cool and accessibility, relatively speaking. Visitors to the stores will also receive limited-edition giveaways.

“After closing in New York in 1930, Hermès first returned to the U.S. in Beverly Hills in 1972. Welcomed by warmth, color and an effortless, casual style, we found our heart and soul in L.A.,” said Robert Chavez, president and chief executive office of Hermès of Paris, who will host the event with Hermès president Axel Dumas.

“More than ever, we are inspired and connected with this community, sharing these traits of a relaxed, yet dynamic lifestyle. Forty-five years later, we celebrate, together, downtown, where the timelessness and authenticity of Southern California genuinely meld with Hermès.”