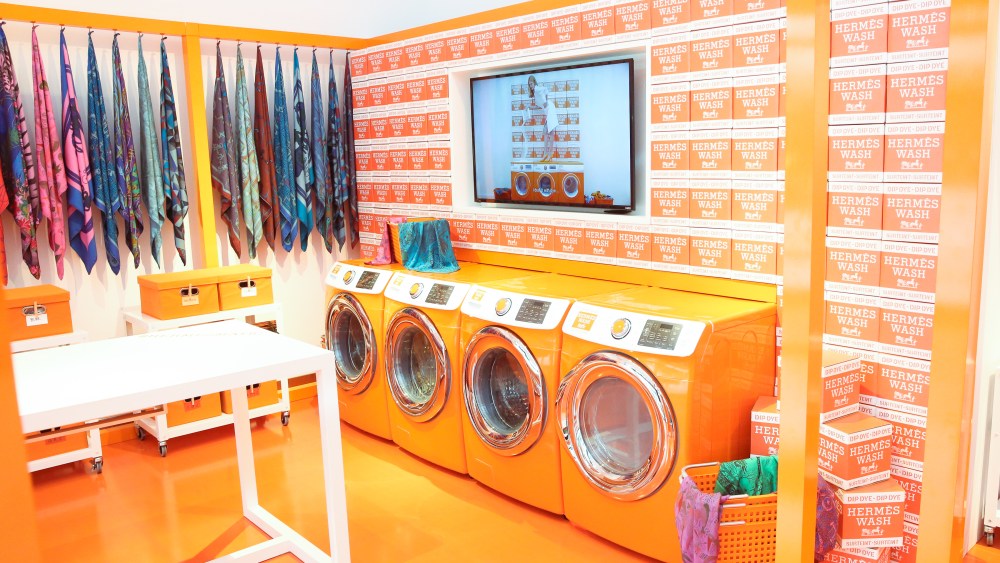 Hermèsmatic was designed to breathe new life into the house’s iconic silk scarves. The interactive activation allows existing customers to give their worn Hermès scarves a fresh new look using a dip-dye washing technique, while also offering the opportunity to purchase a one-of-a-kind scarf from the vintage dip dye collection. Visitors have the choice od bringing in an Hermès scarf of their own for a complimentary dip-dye, purchasing a silk from the dip-dye collection, or purchasing a vintage Hermès scarf to dip-dye (there is a 48-hour turnaround time).

“The idea of the pop-up is to ‘surprise’ our existing and future clients by encountering Hermès in a totally unexpected location, and in a very unexpected way — a laundromat,” said Robert Chavez, chief executive officer, Hermes USA.

“Los Angeles is the final city to activate the Hermèsmatic concept; we previously traveled to New York’s Meatpacking District, Washington D.C.’s City Center and Nashville, where we currently do not have an Hermès boutique. Many of our clients have been collecting scarves for five, ten, even fifteen years, perhaps longer, so the chance to totally change the color and feel of the silk is a very personal and unique opportunity. It’s like having a brand new scarf,” he added.

The next retailer to occupy the Westfield space will be C magazine, which is making its first foray into commerce with a “California State of Mind” lifestyle store featuring all local designers.