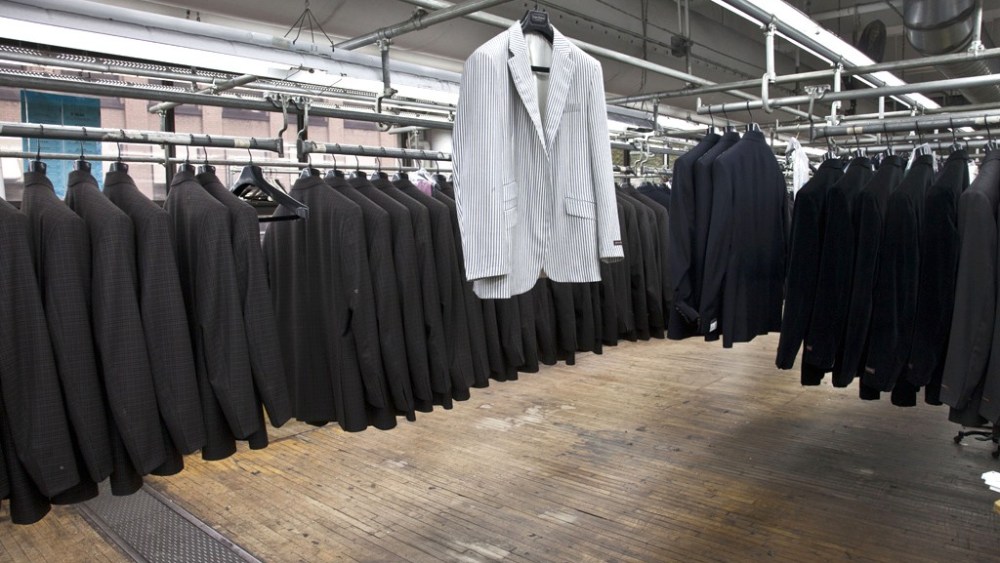 The other shoe is about to drop for HMX Group.

The company is running out of time as liquidity constraints are forcing it to decide as soon as this week whether to sell the firm or file for bankruptcy court protection.

The liquidity constraints are due to a lack of funding from its corporate parent, Mumbai-based S. Kumars Nationwide Ltd.

Doug Williams, chief executive officer, was traveling the past three days and could not be reached for comment.

While not a done deal, financial and market sources said the likely scenario is that HMX will voluntarily file for Chapter 11 bankruptcy court protection for the second time in four years.

In a bankruptcy scenario, sources said one of those bidders would be chosen as the “stalking horse” for the firm’s intellectual property assets. Sources expect that, regardless of whom becomes the final owner of HMX, Williams and Joseph Abboud, president and chief creative officer, would continue with the firm. Both are considered the driving force behind the turnaround efforts at HMX and are respected for the operational and design changes they’ve made at the company.

Sources said the stalking horse was likely to be Authentic Brands. The so-called stalking horse agreement in a bankruptcy proceeding typically sets the base value for a sale, and a court-sanctioned auction usually provides for additional bids in set increments. James “Jamie” Salter, ceo of Authentic, did not return calls for comment on Friday. One individual said Bluestar did not want to be the stalking horse, and another said Iconix, while interested, was expected to come back into the bidding in a bankruptcy court auction. All three entities have experience with fashion and apparel firms.

RELATED STORY: Iconix in the Hunt to Buy HMX Group >>

Authentic’s most recent deal was in June when it acquired the IP assets of Sportcraft Ltd., through which Authentic said it planned to reenergize the recreational sports industry. The company, which seems to favor the action sports and entertainment and celebrity licensing sphere, owns the IP assets of Marilyn Monroe, Silverstar and Tapout. Authentic, which has the backing of Leonard Green & Partners, includes on its board Kenny Finkelstein, the ceo of Knight’s Bridge Capital Partners, a Toronto-based private equity firm.

Iconix, headed by Neil Cole, has a portfolio of consumer brands in which it either owns or has an interest, including Candie’s, Badgley Mischka, Joe Boxer, Rampage, Mudd, Mossimo, London Fog, Ocean Pacific, Bongo, Starter, Marc Ecko, Ed Hardy, Rocawear, Danskin and Material Girl, among others.

As reported, HMX closed on a new financing facility with Salus Capital Partners in August, but it was contingent on cash infusions from SKNL, which has been in business since 1948 and is one of India’s largest apparel and textile companies, on an installment basis. That contingency was required because the Salus financing had been set to close in June, but had hit a roadblock due to a required funding by SKNL that never materialized.

There were concerns last month that SKNL might not be able to meet the first installment requirement, so HMX began an unofficial sale process and held talks with potential bidders at the same time that it weighed its bankruptcy option. It wasn’t immediately clear whether Salus would also provide debtor-in-possession financing should the Chapter 11 filing materialize, although there are also other available options for DIP financing.

HMX is best known for its Hickey Freeman and Hart Schaffner Marx clothing labels, the latter being a favorite of President Obama. The company also owns Coppley, Bobby Jones and Palm Beach, which was recently reintroduced. It also holds the license for Argyle Culture, the preppy-themed line from Russell Simmons that relaunched at Macy’s this fall and is codesigned by Abboud and Simmons. In a bankruptcy, HMX is expected to keep the Argyle Culture license.

Glen Ferraye, president of Simmons Design Group, said despite HMX’s problems, “Business is normal.” He said HMX is “in the process of delivering fall” and has “delivered on the custom shop build out at Macy’s.” He said spring orders for the line have been placed and HMX has begun “developing fall and holiday 2013.”

Although he is not privy to HMX’s sale discussions, Ferraye said he’s certain that Argyleculture, a men’s line targeted to the “urban graduate,” is “being presented as a valuable property with tremendous upside potential that is an asset to the company.”

HMX’s history originated from the now-defunct Hartmarx Corp., which was acquired out of bankruptcy by SKNL in August 2009 and renamed HMX. London-based Emerisque Brands holds a minority stake in HMX. The transaction was a $105 million debt and assumed liability deal. Since the 2009 acquisition, HMX has paid down over $35 million of debt.

SKNL had grand plans for HMX. Since then, the Indian firm has run into problems of its own.

In late 2011, the Indian economy forced SKNL to delay its planned initial public offering for the Indian operations of Reid & Taylor. Last month, SKNL had to delay its annual shareholders meeting. Also last month, the Serious Fraud Investigation Office received a complaint regarding corporate governance violations alleged against SKNL, which the Mumbai Registrar of Companies is reviewing. In a regulatory filing with the Bombay Stock Exchange, SKNL said, “The matters raised by the individual are frivolous and baseless.”

Donna Karan International last month pulled back its license for its DKNY men’s wear from SKNL, a five-year deal that was inked in 2010. Patti Cohen, executive vice president of global marketing and communications for Donna Karan, confirmed that the association has been terminated and said the license has not yet been reassigned.

When SKNL took a 90 percent stake in HMX, its plans were grand and far-reaching in scope. Nitin Kasliwal, vice chairman and managing director of SKNL, hired Williams to run the company, Abboud to head its design and proceeded to put an aggressive plan into motion to help the company regain a top position within the men’s wear arena.

Kasliwal said shortly after the purchase that within five years he expected to grow HMX into a “multibillion-dollar enterprise with various categories of product.”

The first steps were to reorganize the company and revamp the product offering. Headquarters shifted from Chicago to 125 Park Avenue in New York City. Back-office duties for the brands, previously separate, were consolidated in Rochester, N.Y., where the Hickey Freeman factory is located.

HMX then embarked on a frenzied drive to upgrade and revamp its product offering. Under Abboud’s tutelage, silhouettes were modernized, a dose of fashion was injected into the offerings and lifestyle collections were created for each label.

Plans included exporting the Hickey Freeman, Hart Schaffner Marx and Bobby Jones lines internationally; initiating a retail rollout for Hickey Freeman and the launch of a new concept called Streets that would house all the company’s labels, and the hiring of powerhouse ad executive David Lipman to handle the firm’s marketing initiatives.

Observers wondered if it was a case of too much, too soon, a problem that came to a head when SKNL’s issues surfaced.

“Things are unraveling for SKNL and Nitin has become basically invisible,” said one source close to the company. “And that’s really put HMX in dire straits.”

In recent weeks, HMX lost the license for the Ivanka Trump women’s line, which sources said was a blow to the company. “They lost a fortune on that,” said one source. “But they never should have been in that business to begin with.”

Another differentiating factor — as well as a major stumbling block to any acquisition — is HMX’s North American factories. In addition to the Rochester plant, HMX also owns a facility in Chicago and one in Hamilton, Ontario, Canada.

The company is proud of its American roots and during the controversy that arose this summer when it was discovered that the U.S. Olympic uniforms designed by Ralph Lauren were made in China, Williams joined forces with Senator Charles Schumer (D., N.Y.) to approach the U.S. Olympic Committee to say HMX “stands ready” to produce the uniforms in its American factories.

Despite the flag-waving, the factories — and their unionized workforce — have been a sticking point for the company since its Hartmarx days. While the brands produced by HMX, particularly Hickey Freeman, are seen as an area of strength, the cost of maintaining manufacturing facilities in America has been a barrier to any company interested in acquiring the company.

Market sources believe the unions are on board with a sale of the company, as long as that sale ensures the factories continue to operate. That can’t be guaranteed in a bankruptcy filing since the priority in any sale of assets is obtaining the best offer to satisfy creditors’ claims against the bankrupt estate.

Even so, HMX has stuck by its “Made in America” stance.

As Kasliwal said in 2010: “Hickey Freeman is an American icon and it would be foolish for it not to be made in America.”