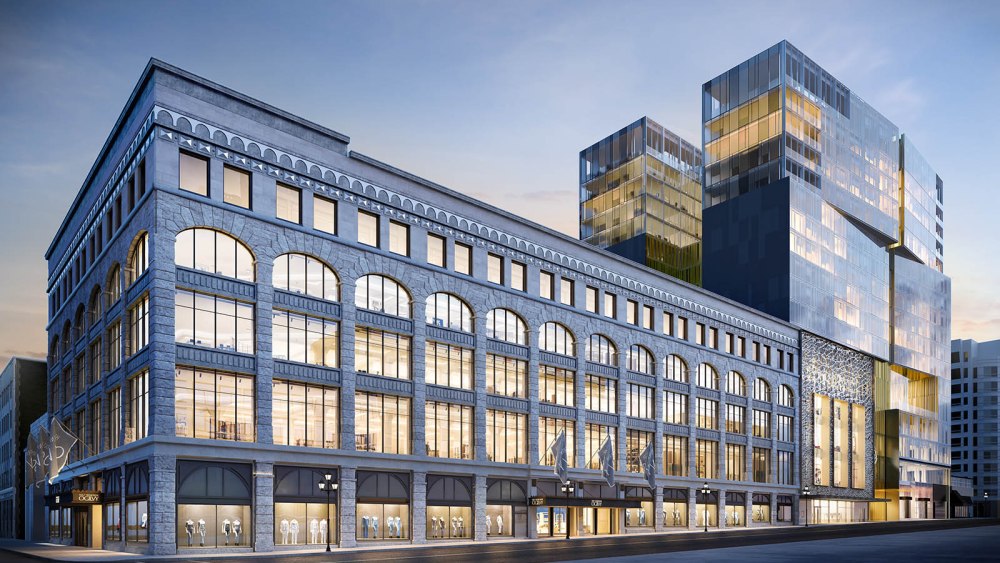 The strategy, extending from late 2016 to 2020, entails renovating and expanding key stores, adding designer shops and upgrading the IT, all with the intent to gain market share in an increasingly competitive retail landscape.

Canada’s homegrown luxury retailer is nearly done upgrading and expanding its Vancouver flagship; has started expanding Ogilvy in Montreal, which will be renamed Holt Renfrew Ogilvy, and is enlarging and enhancing the 50 Bloor Street West and Yorkdale locations in Toronto, among other changes.

“Competition always makes you play your ‘A’ game, but we are doing what’s right for Holt, regardless of Saks Fifth Avenue and Nordstrom,” Mario Grauso, the president of Holt Renfrew, told WWD.  “We’re very happy with our performance and that’s why we are spending the money. This is our strategy moving forward — renovating and adding space to stores.”

All figures are in Canadian dollars.

According to sources, Holt Renfrew, despite the entry of Nordstrom and Saks to Canada over the last four years, managed to eclipse 1 billion in sales (Canadian) in 2017, with the strongest performance seen at the Vancouver store, said to account for around 400 million. The Vancouver site is now considered the “flagship prototype” of the nine-unit Holt Renfrew fleet and is spurred by the city’s accelerated growth and the influx of wealthy Asians.

Due to the rift over trade between President Trump and Prime Minister Justin Trudeau, some Canadians just began boycotting U.S. stores, which could benefit Holt Renfrew. Asked if Holt is seeing a lift, a spokeswoman replied: “I don’t think we’re in a position to answer.”

Over the past two years, Holt has culled 40 percent of its vendor matrix to fortify business with the luxury brands that have been most important to the 181-year-old retailer. Those that are key include Chanel, Hermès, Gucci, Prada, Dior, Céline, Tiffany’s, Louis Vuitton, Fendi, Brunello Cucinelli, Brioni and Berluti.

“A lot of exclusive relationships help define who we are in this retail market,” Grauso said. “It’s our vendor assortment and our curation that set us apart.”

Market sources say Holt Renfrew is more tightly embracing the “crème de la crème” of luxury and related services to elevate its appeal and differentiate itself.

Holt Renfrew, part of the Selfridges Group owned by the billionaire Weston family, is also investing in IT to replace merchandising and finance systems working with SAP software; modernizing point-of-sale systems starting for spring 2019, and revamping e-commerce where Holt Renfrew has been a Johnny-come-lately. The company launched online selling in 2015. “We were selling all categories, but not representing all of our assortment in brick-and-mortar,” Grauso explained. “So about 18 months ago, we pulled back to just beauty, but in September we will be relaunching classifications starting with men’s and women’s designer shoes.” The technology program is part of the 400 million spend.

On the brick-and-mortar side:

• Holt Renfrew is creating its largest store by adding 40,000 square feet to the Ogilvy site at 1307 Sainte Catherine Street W. in Montreal, bringing it to 250,000 square feet. The Holt store in Montreal will close once the Ogilvy site is complete, though elements of the Holt assortment will be integrated into Ogilvy, which will be renamed Holt Renfrew Ogilvy. The changes, scheduled to be completed in 2020, include a major Chanel presence on the main floor and shops from Gucci, Prada, Dior, Fendi, Hermès, Louis Vuitton, Prada and Tiffany. Work is being done by interior designer Jeffrey Hutchison & Associates, with support from Lemay, a Montreal-based architectural firm. The store will be connected to the Four Seasons Hotel and Private Residences, and will feature a new facade designed by Gensler, and a Colette Grand Café designed by Paris-based Laplace.

• Holt Renfrew at 50 Bloor Street in Toronto began a renovation/expansion this spring designed by Gensler in partnership with Kramer Design Group, which is also designing a new facade. It’s scheduled to be complete in 2020. The 186,000-square-foot store will see a 60 percent expansion in women’s footwear to 10,000 square feet with shops for Dior, Gucci, Christian Louboutin and Prada; as well as a 70 percent increase in beauty to 19,000 square feet and a 60 percent increase in women’s leather goods to 21,000 square feet. A Colette Grand Café, designed by Alex Cochrane Architects, will open.

• The freestanding Holt Renfrew men’s wear store at 100 Bloor Street will close and men’s wear will return to the main store at 50 Bloor.  “The men’s store was never meant to be permanent,” Grauso said. “We have 40,000 square feet not being used as selling space,” at 50 Bloor. “We would love to repurpose that selling space. We have started marketing the men’s store.”

• Holt Renfrew in Yorkdale, Toronto will expand by 10,000 square feet to 129,000 square feet. In addition to the revamped Colette Grand Café, expanded beauty hall and the new Fendi Men’s shop, the Yorkdale store will create a “world of” Gucci shop that’s twice as large as the previous Gucci shop, and larger shops for Dior, Fendi, Balenciaga and Prada Men’s. The Yorkdale project, designed by Gensler and Kramer Design, should be completed in spring 2020.

• Holt Renfrew in Vancouver has nearly finished a two-year, 40,000-square-foot expansion, bringing the store to 190,000 square feet, and doubling the number of vendor shops to 80. Among the shops are Louis Vuitton and Fendi men’s wear; Christian Louboutin in beauty and men’s and women’s footwear; Céline leather goods, and David Yurman and Bulgari jewelry. Holt’s renovation in Vancouver, designed by Janson Goldstein, included a tripling of women’s footwear to 8,500 square feet with styles from Alexandre Birman, Pierre Hardy, Simone Rocha, Church’s and Freda Salvador added for fall 2018, and a 20 percent increase in space for men’s wear to 21,000 square feet, including new shops for Brioni, Moncler, Fendi and Givenchy.

Grauso would not disclose Holt’s volume in Vancouver, but said, “Every single business in that store is very healthy. Nothing disappoints me. It’s one of the top six or eight luxury stores in the world,” in a league with Bergdorf Goodman and Neiman Marcus Beverly Hills, he said. “People don’t realize how good the Vancouver market is.”

The Nordstrom people would be among those who do. Three years ago, Nordstrom opened in Vancouver and the site is now the retailer’s top Canada location and among the top three Nordstrom units overall, no doubt motivating Holt Renfrew to step up its game.

In addition, the Holt Renfrew catalogue has been beefed up. “The fall issue will be our biggest issue ever, almost 400 pages,” Grauso said. “People say print media is dying. I’m not sure that’s right. I am believer in it. I hear from the salespeople that customers are still pulling out pages. We will continue to invest and work on that magazine. We print over 100,000 copies per issue,” which are distributed to homes and available in the stores. There are three editions each year.  “We have upgraded the model cast, improved the curation of the product, doubled the size, in terms of pages and advertising over the past two issues, and changed the paper quality.”

Back in 2012, the Westons allocated 300 million to grow Holt Renfrew’s footprint by 40 percent across Canada over a three-year period. But the 400 million disclosed by Grauso, who joined Holt Renfrew in 2016, is additional capital. “It’s really about continuing to deliver what we have delivered historically,” Grauso said.