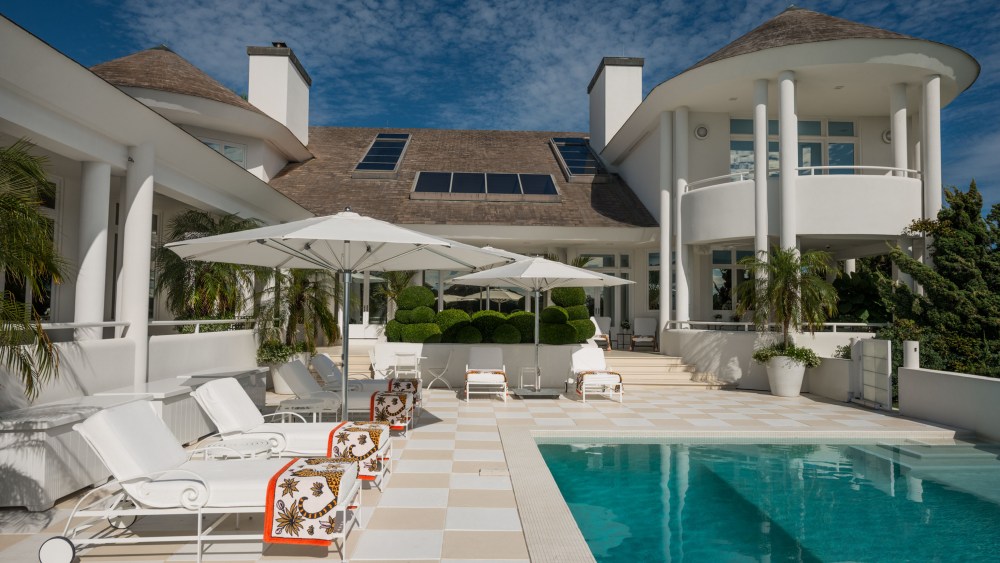 Beauty and skin-care maven Trish McEvoy is looking to part company with a Southampton street popular with celebrities.

McEvoy just listed her sleek turreted Hamptons home for sale, asking $23.5 million — and, naturally, her house has its own salon.

Set on 2.4 acres on Wickapogue Pond in the exclusive Murray Compound, the 8,500-square-foot, seven-bedroom property is three houses away from the beach and was originally built for Ford Motor heiress Elena Ford.

Features include no less than 10 bathrooms, a waterfront library with fireplace, a media room, a mud room and a large kitchen with glass countertops, and a breakfast area.

The new kitchen was part of the cosmetic lift that McEvoy gave the house after she paid Ford, whose father is late Greek shipping heir Stavros Niarchos, just under $5.5 million for the house in 2000.

Upstairs, there’s a gym and a master suite with a private rooftop deck overlooking the pool area and with ocean views, while there’s a large salon in the basement.

Expansive terraces, a heated gunite swimming pool with cabana and dining pavilion can be found outside.

The house is on Squabble Lane where McEvoy’s neighbors include Howard Stern and until last year former tennis champion John McEnroe.

According to the Wall Street Journal, which first reported the story, McEvoy is selling because she no longer spends enough time in the wealthy enclave.

She founded her eponymous beauty and cosmetics company in the Seventies and later opened one of the nation’s first medi-spas with her husband, dermatologist Dr. Ronald Sherman.

The listing agent is Tim Davis of Corcoran.