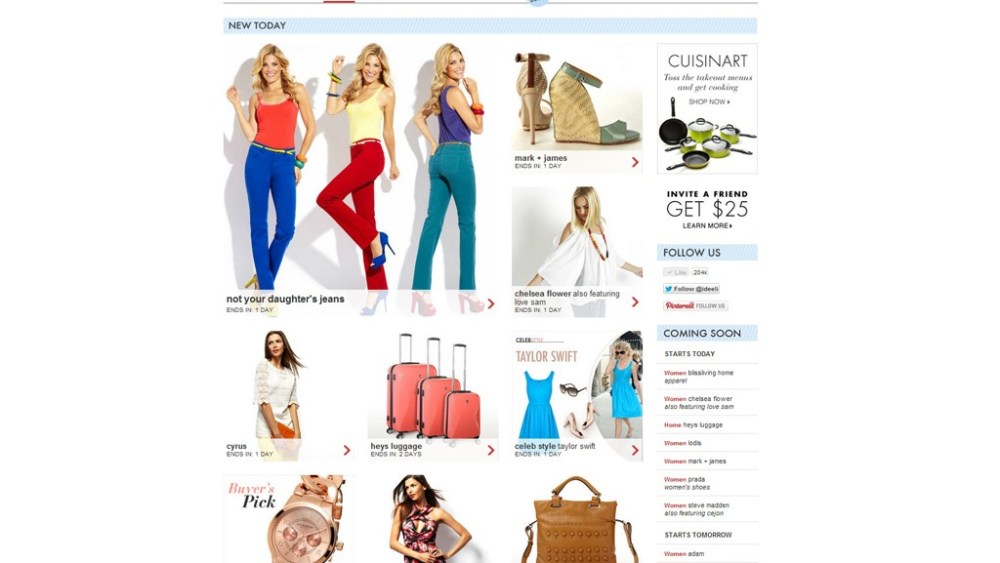 The fast-growing Web site, which specializes in limited-time sales, has received $30 million in funding from a group of investors, including Credit Suisse. It’s Ideeli’s fourth round of funding since the company was founded by Paul Hurley out of his apartment in November 2007, bringing Ideeli’s total funding to about $100 million. All the other investors — Next World Capital, Cue Ball Capital, StarVest Partners, Constellation Growth Capital and Kodiak Venture Partners — participated in the latest round of funding.

“We have a pretty broad investor base,” said Hurley, Ideeli’s chief executive officer, in an exclusive interview with WWD on Wednesday. “We’re a late-stage growth private company. We’re investing heavily in infrastructure and the team necessary to build a $1 billion online retailer.”

Hurley didn’t give a time frame for when the company could reach the $1 billion goal, and he declined to disclose the current volume. Industry sources estimated Ideeli’s sales to be between $100 million and $200 million. Last fall, Inc. magazine said Ideeli was the fastest-growing company in America and listed 2010 volume at $77.7 million. While many limited-time or flash-sale sites have emerged, there are only a handful generating nine-figure volumes, including Gilt Groupe, HauteLook and Rue La La, as well as Ideeli. Web sites for limited or flash sales are “easy to start but very few get to scale,” Hurley said.

The new financing, Hurley said, will be used to sustain growth, build infrastructure and systems, further develop customer data and insights and pump up the Ideeli team. It will also be used for working capital.

In August, Ideeli is relocating its headquarters from 148 Lafayette Street in New York’s SoHo, where there is a staff of 250, to The New York Times Building at 620 Eighth Avenue, which is closer to the Garment District and will provide greater space to accommodate growth. The photo studio and certain other company operations will be run out of 1385 Broadway near the new headquarters.

Ideeli has about 3,000 brands from which it buys inventory or takes inventory on consignment. Key brands often on the Web site include Nicole Miller, Nine West, Anne Klein, Ellen Tracy, Desigual, BCBG, Vince Camuto, Tommy Hilfiger, Steve Madden and Vivienne Tam. The Web site stages 20 to 30 new sales each day, with discounts from 40 to 80 percent off. The Web site boasts 5.7 million members.

Hurley credited Ideeli’s rapid growth to “an understanding of its customers, great product, an engaging experience, and the right positioning focused on ‘mainstream’ women customers,” meaning those with $50,000 to $150,000 annual incomes. He also cited “robust” editorial, mobile and social media functions.

Two rivals, Rue La La and HauteLook, were acquired by larger companies in 2009 and 2011, respectively. Hurley declined to comment if selling Ideeli or taking it public was in the game plan. Instead, he reiterated that the company plans for long-term growth.

Asked if Ideeli (a name invented by Hurley) would ever enter the brick-and-mortar realm, like Amazon is planning to do, Hurley replied: “I would never preclude it, but we have no plans to open a store.”