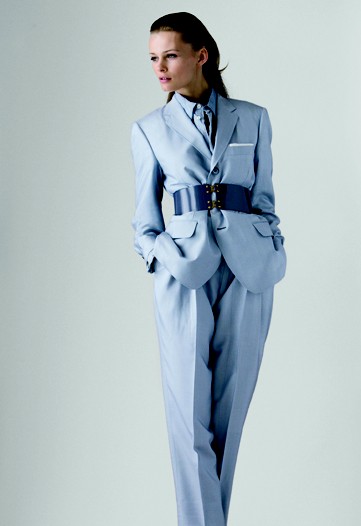 PARIS — While the global economic crisis has thrown many high-flying luxury brands into a tailspin, operating under trying circumstances is old hat for the folks at Yves Saint Laurent.

“We’ve always been in crisis,” said Valerie Hermann, who arrived as chief executive officer of YSL in early 2005, a year after losses had ballooned to 76.4 million euros, or $95 million at average exchange rates. “I think we have a team which is quite well prepared to go into this crisis.”

And there is a motivating victory to celebrate: As reported last month, YSL reached breakeven in 2008, surprising many in the market. Gucci Group, which acquired YSL in 1999, has resisted setting a profitability deadline for the storied fashion house after a radical attempt to engineer a Gucci-esque renovation drove YSL deeply into the red.

Gucci Group ceo Robert Polet has not wavered from his 2004 statement that YSL would likely turn profitable when revenues reached about 300 million to 350 million euros, or $375 million to $437.5 million at current exchange. The milestone was reached as revenues rose 18.8 percent to 263 million euros, or $328.7 million, suggesting the good news came earlier than expected.

Hermann credited product expansion, particularly in the high-margin leather goods business, for propelling the brand into the black — with tight cost controls playing a supporting role.

“We went from a situation where it was mainly ready-to-wear and one bag, to ready-to-wear, bags, shoes and small leather goods,” Hermann said in an interview, seated in the meeting room situated between her office and that of creative director Stefano Pilati, her design counterpart in the turnaround effort. “Are we a monoproduct brand? Not any more.”

The executive was referring to the Mombasa, a hit bag from the Tom Ford-era YSL that was the couture brand’s first real volley into accessories. (Previously, costume jewelry by the late couturier’s muse Loulou de la Falaise was the main statement.) While Ford’s horn-handled shoulder jewel is still available in stores, it’s the Muse, Muse 2, Downtown and Tribute bags that have given YSL further legitimacy, along with influential shoe styles such as the Tribute, a platform sandal.

While product expansion, including the Edition 24 line of wardrobe staples, plus evening and unisex capsules, bumped up the top line, Hermann nurtured the bottom line with close attention to open-to-buys, inventory levels, pricing and margins. Healthy sell-through took priority over loading up stores with merchandise.

“The best way to improve the results was to increase the turnover, with a good margin,” she stressed.

A driven but fun-loving executive, Hermann has kept a low press profile since she joined the company, but can now trumpet some of YSL’s achievements.

Powered by Pilati’s designs, YSL is ranked number-one within Gucci Group in terms of editorial credits, prorated versus advertising investments.

The Italian designer, who worked under Ford before taking the solo reins in 2004, took some lumps for his first collection of wide belts and tulip-shaped skirts. But it would prove influential, and his recent collections have received more critical acclaim, especially a breakthrough futuristic collection last year.

What’s more, the brand has achieved double-digit growth every year since 2005 without opening any retail stores — the only label in the Gucci Group to have that distinction.

To be sure, YSL’s retail network has been a bugbear for Hermann in more ways than one. The 61 company-owned stores quickly opened during the Ford era gave YSL an immediate platform to compete with other top brands, but also burdened the firm with the high fixed costs. (There are also seven franchise locations.)

Hermann and Lee were also saddled with a too-dark store concept that did not resonate with consumers. “When the first concept is a failure, you can’t have another,” she said.

Last year, Pilati unveiled the first new-look boutique at its historic Saint-Sulpice location in Paris, with ceilings and wall panels in the glossy lacquer that’s the color of YSL’s legendary Opium perfume as the central design element.

Hermann dubbed the new decor a success, citing double-digit growth at Saint-Sulpice. About a dozen locations now reflect the new interior design. The brand is present in about 250 wholesale doors.

Having fought its way out of the red, YSL can resume expanding its retail network. A unit in Seoul recently opened, and three more locations in Asia are coming in 2009: Hong Kong, Taiwan and Singapore, Hermann said.

At present, YSL’s business is concentrated in Europe, which in 2008 accounted for 57.8 percent of sales, versus 21.6 percent for North America, 13 percent for Asia-Pacific and 7.5 percent for Japan, where the brand logged a 10 percent sales gain last year.

YSL is absent from South America, has only two locations in China and is only this year making footprints in Southeast Asia — meaning plenty of scope for future geographic expansion, Hermann said, rattling off Las Vegas, Germany, Brazil and China as future possibilities.

Dressed in a black cardigan, cream blouse and black pants, Hermann said she viewed overcoming the deficit as a personal challenge, with no easy solutions but to make YSL a go-to fashion brand.

“It was a reality, so we had to cope with it,” she said. “What makes you successful is when the customer buys your clothes. I didn’t want to reach breakeven by endangering the development.”

Cost controls were vigilant, and there was some retrenchment. YSL shuttered boutiques in Brussels, Capri, the Americana in Manhasset, N.Y., and “right-sized” the Manhattan flagship on Madison Avenue.

But there were investments, too. Budgets were increased for sample collections, product development and communications. In total, 100 employees were added over a four-year period, Hermann said.

As gratifying as reaching breakeven is, Hermann characterized it only as a “first step. It’s not enough,” with the goal being to reach a double-digit level of profitability consistent with other European luxury brands. “We have so many things to do.”

Pilati agreed. “It is a milestone, but it is at the same time just a signal of the beginning,” he said. “We have an ambitious path ahead, and we are determined to continue and improve our profitability.

“YSL should continue to be a brand of distinction,” he continued. “It’s about focus: focus on technique and mastery in design and delivering unique proposals to the marketplace. Then of course there are objectives to grow responsibly the sales and network of the company, to more fully realize its potential.”

Looking ahead, Hermann said YSL would likely expand e-commerce to Europe after a promising launch in the U.S. She also spies “huge potential” for the brand in men’s wear. “I think Stefano has a real vision for men,” she said.