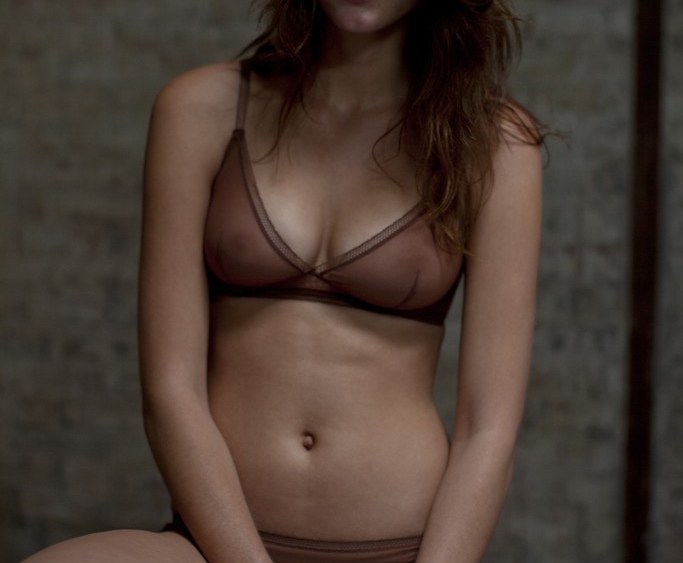 Let it all hang out.

Triangle bras, sheer fabrics and a natural-looking silhouette that doesn’t require underwire or padding are increasingly in demand, leading European brands, including Agent Provocateur, Eres, Bodas and Yasmine Eslami, to report an uptick in sales of softer and less-constructed silhouettes. The reasons range from comfort to fashion and aesthetics to changes in the way women project their femininity.

“For the past few seasons, there has been a very strong trend coming through for soft lingerie, for ‘no-bra bras,’ reminiscent of the Seventies, when women wanted to look topless but with a tiny bit of support,” said Gillian Proctor, program leader for Contour Fashion at De Montfort University’s Department of Fashion and Textiles in Leicester, England.

“It’s a little bit of a reaction to push-up, in-your-face breasts, and in a recession, people tend to want simpler pieces that are easy and comfortable,” she observed. “It’s also a result of a sporty influence from the Olympics, and from all the layering that is going on in fashion.”

Proctor added that soft styles are becoming so popular — and demand so great within the industry —  that the university will, in July, offer a Bespoke Vintage and Soft Lingerie design course as part of its summer program for industry professionals (rather than students).

Sarah Shotton, creative director of Agent Provocateur, said she was inspired by Seventies issues of Playboy, with their soft-focus images and models who were “all about curves, a natural-looking shape and no fake boobs.” She said that among the bestsellers this season have been the triangle bras that give a teardrop shape and separate the breasts rather than push them together.

“It’s trendy to be curvy now — even celebrities have put a bit of weight on and everything moves a bit more. Also women are not exercising so much, and a little wibble-wobble can be very sexy,” she said, adding that the soft-lingerie trend also ties in with what’s going on in makeup.

“Makeup is more natural. Women don’t feel the need to put on their war paint anymore, and they wear their hair down — and wavy. The look is relaxed, relaxing and very sexy,” she said.

Both Yasmine Eslami, who designs lingerie under her own name, and Bodas, the London label, have built their businesses on softly constructed lingerie. Eslami said she has always referenced Guy Bourdin’s images of Seventies Yves Saint Laurent and the brand’s then-signature look of a soft bra worn under a smoking jacket.

“I love Seventies fashion. Ossie Clark is an inspiration. The whole era was so chic and about freedom,” she said.

It’s the fashion customer, she said, who seeks out her soft bras. “They’re not teenagers, and they’re looking to wear it under sheer clothes or under a jacket.” Eslami, who worked for Vivienne Westwood Red Label in London for many years, said it’s been “nice to get away from 18th-century cleavage, and not have boobs pushed together.”

Not every woman can wear a soft bra with no underwire, but Bodas, which has its own shop on London’s Ledbury Road and sells at stores such as Barneys New York and Fenwick in London, thinks it may have the answer.

“A 36-C cup is already too big for a soft, unstructured bra, so we’re working to build a soft bra that can accommodate larger cups,” said Helena Boas, founder and co-owner of London-based Bodas.

“We’re looking at how to add structure into the band and the shoulder, and whether to double the layers of fabric on the cup,” she said, adding that women with a wide range of body types are asking for the soft construction.

Eres, another company known for its soft triangle bras in sheer fabrics, has already come up with ways to make the soft bra sturdier for larger cup sizes. “We sculpt the body with Lycra, fabrics and secret seams, and work very closely with the manufacturers to develop strong but lightweight and thin fabrics,” said creative director Valérie Delafosse.

Delafosse pointed out another reason behind the popularity of the soft bra: implants.

“A lot of women with breast implants don’t wear an underwire bra, because it hurts. And what a woman wants from a bra in the end is to be comfortable, supported and sculpted,” she said.

Harvey Nichols is one of the many retailers that has bought into the trend, stocking items including the Retro Sculpt triangle bra by Aubade.

“This look is very sexy, which is a complete reaction against the whole padded bra and fake boobs,” said Priya Kumar, assistant buyer intimate apparel. “The soft bras and sheer fabrics give a more natural, effortless look that is sexy in a more subtle way.”

Analysts at Stylesight, a multinational company that offers forecasting and trend analysis for designers and brands, said the soft lingerie trend is coming through loud and clear on both sides of the Atlantic.

Nivara Xaykao, the site’s intimates and swimwear editor, said that the trend has been trickling down from the runways, including the Marc Jacobs spring 2011 collection with its Studio 54 feel and YSL influences.

“In the mainstream, we’re also seeing a lot of natural silhouettes in festival dressing, like cropped camisole tops,” she said.

Her colleague Sharon Graubard, senior vice president of trend analysis, said that for some women, the soft Seventies-inspired bra shapes have never gone out of fashion.

“A lot of Baby Boomers have clung to that silhouette. Forty years on, the trend has come full circle….The pinup girl is kind of moving away.…The look is less about trying so hard and more about the days when there were no boob jobs and no Brazilian waxes. The softer bras conjure that mood.”