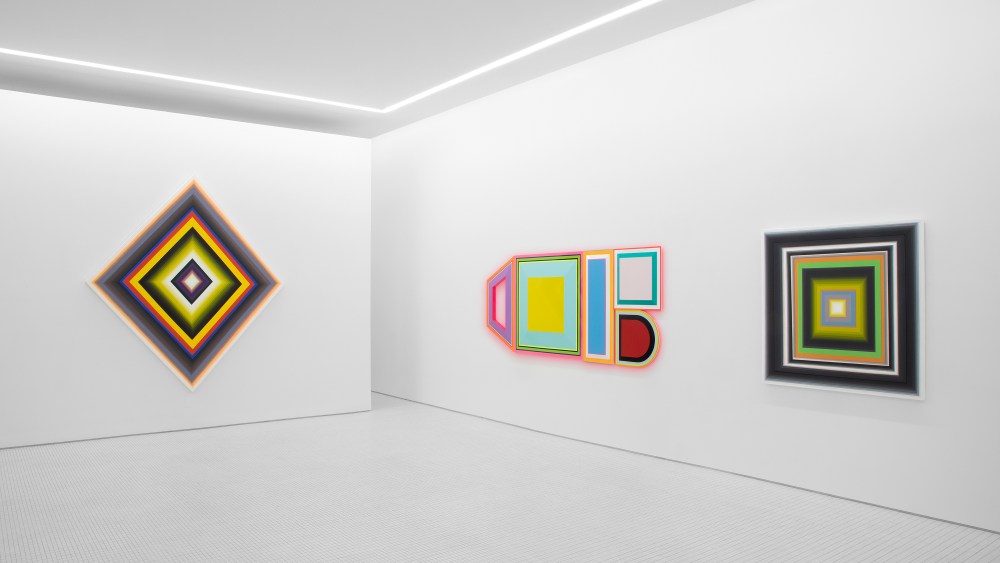 The origin story of Library Street Collective’s two-artist exhibition “Zenax,” like many recent collaborations, traces back to social media.

“I reached out to Gary [Lang] via Instagram because I had admired his work for many, many years,” says artist Beverly Fishman. “I started ‘liking’ everything, like an art crush kind of thing.”

When Detroit-based Library Street discussed organizing an exhibition, Fishman pitched the idea of a collaborative show with Lang, who’s based in Ojai, Calif. Fishman, who retired from her post as head of the painting department at the Cranbrook Academy of Art in 2019, moved into a live-work space in Detroit with her husband full-time in 2019. The artist remains busy as ever, with several commissions for large-scale murals coming up in the new year at Michigan State University and a solo show at the Contemporary Dayton, in addition to projects in Chicago and New York.

The link between Fishman and Lang’s aesthetics, intermixed in the downtown gallery, is clear. Both artists use the tools of abstraction — uniquely evocative color palettes contained within sharp geometric forms — to explore the connection between the internal and external body. Lang’s artwork is informed by meditation and movement, while Fishman explores the pharmaceutical industry. The exhibition title, “Zenax” — a portmanteau of “zen” and “Xanax” — speaks to the intention behind their work and the conversations that arise from their proximity within the gallery.

“I saw relationships in our work — not just formally,” says Fishman, adding that she was drawn to the singularity of his forms — circles and squares — as well as his approach to color, which was her entry for responding to Lang’s work.

Fishman’s paintings are rooted in similar ubiquitous shapes, culled from pill shapes and collaged together in polypharmaceutical compositions. Her painting titles serve as a clue for viewers looking at the familiar shapes, some more recognizable than others. Each piece is “Untitled,” and the afflictions targeted through each pill shape are named in parentheses, which offer the viewer a physical connection to the work. Fishman seeks out the less common pill shapes, like triangles and trapezoids, because of their connection to advertising and design.

“I don’t name brand names because I don’t want to be sued. There’s a lot of money that goes into all aspects of pharmaceuticals — the name, the size of it, the shape, the color, the design — and I’m well aware of that,” she says.

Fishman is well-versed in the psychology of color, which the pharmaceutical industry taps into, and the bright colorscape of her work reads differently when the subject matter is brought to the foreground. But she doesn’t regard the drug industry with pessimism — interpretation is left to the beholder.

“I want my work to discuss real-life things without being didactic,” she says. “I’m not out to say this is good, this is bad, this is how you should think. I’m presenting, hopefully, a work of art that seduces the viewer long enough to think.”

Fishman has based her work in the medical industry since the late ’90s, and has witnessed a societal shift in how people discuss medication with each other.

“I’m tracking society in a way; I’m tracking what is going on. It’s fueling me. How can I get away from it?” says Fishman, asked about her ongoing artistic curiosity toward the industry. “When I started this work, people were like, why are you focused on this? They said, ‘this isn’t personal to you.’ I said — you know my personal life? Nobody knew what pills people took,” she continues. “That wasn’t normal discussion. But in hindsight, people say to me, how did you know? And I say, it was always out there. Nobody was paying attention.”