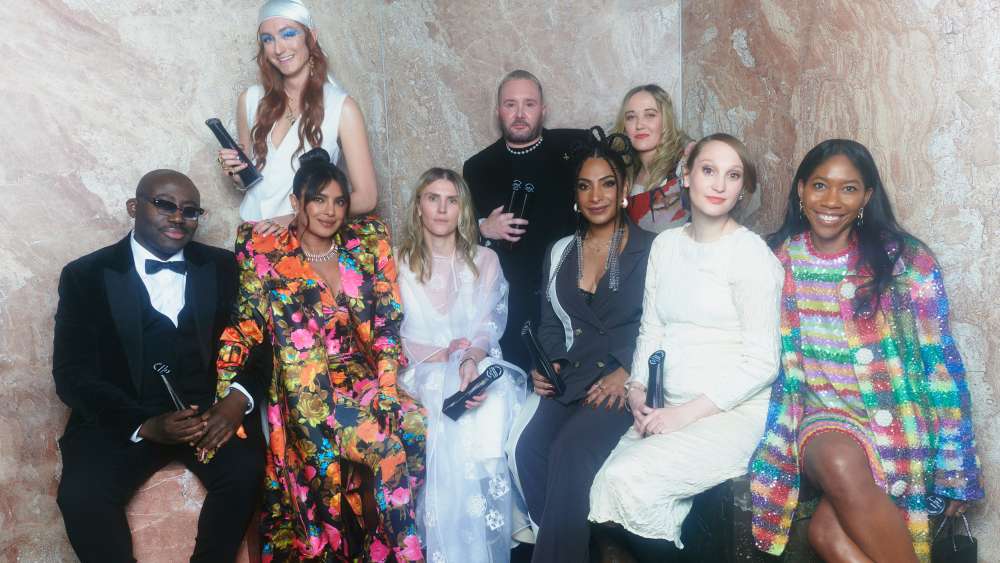 The late designer — whose sudden death was announced a mere 24 hours before The Fashion Awards in London were set to take place — was on everyone’s mind Monday night at Royal Albert Hall.

There was an outpouring of love and emotion for the man who shook up the fashion system and opened the door for so many marginalized communities.

Before the event officially began, Idris Elba took to the stage to pay tribute to Abloh.

“I lost a friend, his wife lost a husband, the fashion industry lost a legend and the world lost a special human being,” said Elba who was surrounded by screens bearing the image of Abloh, who died Sunday after a long private battle with cancer.

“He was one of the few people I could have a conversation [with] about multitasking. But he didn’t do it for the fame or the money, he did it to inspire others,” said the actor who then recited Maya Angelou’s poem “When Great Trees Fall.”

“Those who know Virgil know he would want us to have a good time. Tonight’s entire show is dedicated to Virgil Abloh’s life,” he added.

Abloh, a first-class talent and changemaker, left at a time when change is top-of-mind in the traditionally change-averse fashion space.

In addition to Abloh’s passing, more bad news cast a shadow over the night: The emergence of another COVID-19 variant has led to tightened measures in the U.K. for at least another three weeks.

Nevertheless the show, which raises funds for the British Fashion Council’s Foundation, did go on — at least for those guests who could provide proof of double vaccination or a negative COVID-19 test.

Quinn really stole the spotlight both on the red carpet and on stage where Kylie Mynogue and her army of dancers performed in his signature floral catsuits.

Acknowledging the shifting landscape, the British Fashion Council put the focus on rewarding 15 changemakers across the creativity, environment and people categories — a new format introduced during last year’s video ceremony in order to highlight a wider group of individuals instead of focusing on the megabrands.

”These are the leaders inspiring us to do things differently,” said Porter, the evening’s presenter, who took to the stage with big dance moves and Brexit jokes at the ready.

Yet, the creativity category was still populated by established players. Abloh was recognized for his work at Off-White and Louis Vuitton Men’s alongside Dior’s Kim Jones, Gucci’s Alessandro Michele, Balenciaga’s Demna Gvasalia and Loewe’s Jonathan Anderson.

”These recognitions keep me and my colleagues motivated. Part of my design practice is to keep the doors open for the future generation,” said Abloh in a prerecorded message for the event.

Many of the names on this year’s winners list — including Jones, Anderson and McCartney — were a repetition of last year’s list, which prompted the question of whether the industry is back to its old ways of putting the focus on a small group of people.

Hunt’s inclusion felt like a welcome addition: she has been leading Grazia U.K.’s fashion content for more than two years and has also recently published the book “Girl,” telling compelling stories of Black womanhood.

”I don’t take the roles I’ve been given lightly. If you have power you need to empower someone else,” said Hunt.

Reed, who is also a first-time winner, spoke about the importance of operating beyond the system.

“We need to recognize that the structures need to be broken down further. According to this system’s books I shouldn’t even have a business, yet I’m turning profits without a single wholesale stockist,” said the designer, who has chosen to show outside the traditional BFC schedule and focus on a more limited demi-couture business model — something he plans to continue doing in 2022. “We need to burn the f–king books that tell you how to run a business and show these people that you can do it your own way.”

And what about awards ceremonies generally?

“These high-profile events are a wonderful way to bring everyone together globally, and reflect on the fantastic achievements and hard work that has been done within the industry — but without a doubt, we need to diversify who the invitees are to these events and who receives these awards,” said stylist Zadrian Smith, who alongside his partner Sara Edmiston were behind Ali’s Richard Quinn look and Paul Mescal’s Gucci look. They also dressed Lady Amelia Windsor, Arlissa and Sinead Harnett in the London-based label Sabina Bilenko couture.

Kim Jones was named designer of the year for his work at Dior Men and Fendi, a timely recognition building up to the designer’s return to his home country to show his resort collection for Dior Men next week.

Last time the event took place in 2019, Lee had set a new record bagging four major awards. But what a difference two years can make: Lee parted ways with the Kering label earlier this month for “clashing” with several members of staff, according to sources, and there was no mention of the British-born designer during the ceremony, nor was there a single sighting of Bottega Veneta on the red carpet.

This is one of many big wins for Dojaka this year, who was also thrust into the spotlight when she was named winner of the LVMH Prize in September: she staged her debut show during London Fashion Week, collaborated with Alessandro Dell’Acqua’s No. 21 and saw her signature cutout dresses go viral.

The industry has a tendency to go after young talent as soon as they’re deemed “hot.” So although much deserved, the numerous accolades and heightened press attention also lead to questions of whether this creates too much pressure and too many expectations for a young design graduate who still operates in a two-person team.

”This is probably the hardest thing I’ve done,” said an emotional Dojaka expressing her gratitude for all those supporting her.

As reported, the Isabella Blow Award went to stylist and Dazed editor in chief Ibrahim Kamara, whose global perspective and rich visual storytelling have been making waves in the industry.

Kamara, who was championed by Abloh and closely collaborated with him on Louis Vuitton’s campaigns and shows, dedicated the award to his team and Abloh.

“You’ll always be one of a kind, so pure, so unique. Your mind, so inspiring to witness. Thank you for inspiring Black kids around the world,” said Kamara in a prepared statement read out on the night.

He also asked attendees to petition the government to invest more in arts and “in immigrants.”

Other industry heavyweights recognized during the evening included Tommy Hilfiger, who received the outstanding achievement award, following in the footsteps of Giorgio Armani and Miuccia Prada.

”Tommy is in London and at the same time they’re casting for a new James Bond. Coincidence? I think not,” joked Porter.

There was a special tribute to Chanel, too, for its culture fund, while Michele received the trailblazer award — and lived up to the title by appearing on gaming platform Roblox in the form of an avatar to present an award to digital label CSapphire, who won the ceremony’s new metaverse design award.

Sinead Burke, who presented Michele’s award, commended on his “quiet but confident leadership” and ability to create a space where people can feel safe, be it with his Gucci Vault initiative; his commitment to support people the disabled community, or his public critique of the Italian government’s policy on gay and transgender rights.

“Being a changemaker is going beyond yourself [because] there are still too many people who feel excluded, who are not here tonight because they feel they don’t belong,” added Burke.

Get to Know This Year’s Fashion Awards Nominees

Most Memorable Moments From Fashion Awards