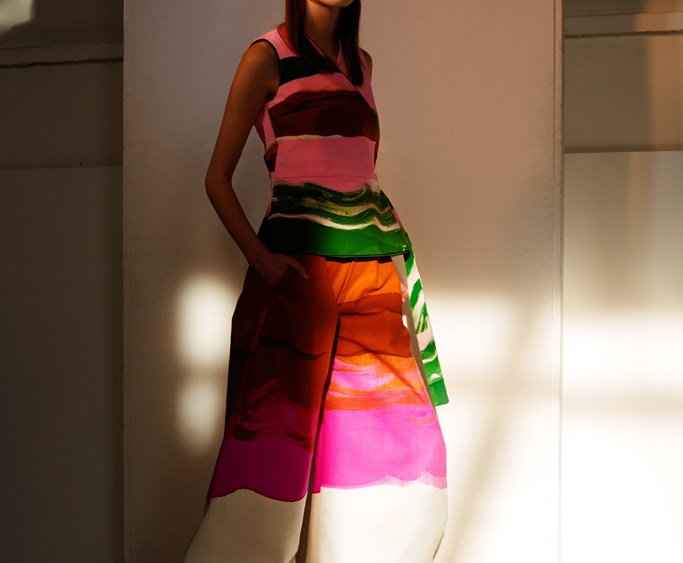 PARIS — Mary-Kate and Ashley Olsen aren’t the only out-of-town designers with Paris on their mind. Czech, Chinese, German and Belgian creators, among others, set up showrooms to attract international attention during Paris Fashion Week.

The Row slipped a presentation into the already-packed Paris calendar on the first day of the season, giving a strong signal that Paris is more than ever a huge draw.

Around 50,000 professionals flow into the City of Light for its fashion week.

“Paris is a lab to discover [talents]….Paris is to fashion what Silicon Valley is to new technologies,” said Serge Carreira, a lecturer at Sciences Po Paris.

Pre Helsinki, an event aiming to raise awareness of Finnish designers, returns to Paris for its third installment. Satu Maaranen, the platform’s cofounder and creative director and a past Hyères winner, explained: “Paris is the most important area to be represented in, in order to meet with international buyers. Everyone is in Paris. It’s the place to be, but it’s also for the French market. There’s an incredible selection in Paris’ department stores.”

This season, foreign designers can also tap into a domestic market that is faring better. The French Women’s Ready-to-Wear Federation forecasts that sales in France will stabilize or increase slightly in 2015 after seven consecutive years of decline. This comes thanks to an increase in French households’ purchasing power.

Sales of women’s rtw fell 0.5 percent in value terms in the first half of 2015 versus the same period a year earlier, with French women spending 5.05 billion euros, or $5.66 billion at average exchange, on clothing. Meanwhile, overall clothing sales, including men’s wear and children’s wear, were down 0.4 percent.

“We think the economic outlook is going to improve due to several positive factors,” said François-Marie Grau, the federation’s managing director, citing low oil prices, subdued inflation and a lowering of the tax burden.

“Paris is the last destination on the fashion roadshow….It’s kind of like a ‘one-stop shop.’ Some retailers don’t have the budget to visit every city and others like to see everything first before deciding where to invest their cash,” explained Justin O’Shea, buying director of Mytheresa.com. “With such a hive of excitement and creativity going on, the mood is literally set for more niche designers to get potentially ‘discovered.’ I see the British designers  at London Fashion Week, but they have a great exposure and importance in Paris. I see mostly Russian designers their showrooms or at presentations that Miroslava Duma hosts.”

This season, O’Shea also hopes to pass by the Chinese showroom.

Foreign designers can also count on Paris’ push to promote fashion. Paris Mayor Anne Hidalgo has been a major backer of the sector since taking the post in March and is upping the city’s fashion ante this season with a flurry of initiatives.

Designers coming to the city can regroup in showrooms that are backed by organizations like the Council of Fashion Designers of America that preps for its ninth season of CFDA/Vogue Fashion Fund’s Americans in Paris, or the British Fashion Council.

Some brands choose to go it alone for several reasons. It might be because there’s no industry-wide initiative coming from their countries designed for Paris specifically, or that they want to establish their own universe.

“You know the Antwerp Six. When you’re from a small country, if you join forces it’s much easier to stand out. We can connect our contacts, our funds…and we don’t have competition. We are working together, sharing ideas and contacts,” Maaranen said.

She also serves as women’s wear designer for Marimekko, which will present for its first time in Paris on Oct. 4.

Here are showroom highlights for the Paris season.

Ptackova, whose latest collection is inspired by fairy tales and is about the transformative aspect of fashion items — for instance, trousers that are easily turned into a backpack — will present at Plan 8 showrooms.

Spetlova’s signature leather creations premiered on Prague official fashion week schedule. While designing the collection in London, where her models are sold in Dover Street Market, she was inspired by the work of British painter and printmaker Howard Hodgkin.

“Smocked and delicate, perforated leather skins are softer and summery, but the shapes remain boxy, androgynous and asymmetrical,” said Spetlova about her new collection, which will be presented in Boody Gray Showroom along with Chatty’s nostalgic collection entitled “Dusty Pictures.”

The Berliner Mode Salon and The Berlin Showroom

The Berliner Mode Salon is again on the move. Now in its second season, this curated platform for 28 established and emerging German designers will have its international debut in Paris at the German Embassy on Sept. 30.

This follows the Salon’s spring edition at the landmark Kronprinzenpalais during Berlin Fashion Week last July, and the subsequent six-week pop-up shop at that city’s leading department store, KaDeWe.

Freshly appointed German ambassador Nikolaus Meyer-Landrut and his wife, Brigitte, and German Vogue’s Christiane Arp, are hosting this invitation-only cocktail event for international buyers, press and industry players. Further supported by Mercedes-Benz, the Paris event from 7 to 9 p.m. at the Palais Beauharnais at 78 Rue de Lille in the seventh arrondissement reflects intensified efforts to spotlight Germany’s design talents both at home and abroad. Also aiding the cause is The Berlin Showroom, where 10 Berlin designers will present their spring collections from Oct. 2 to 5 at Espace Modem.

All will be showing their collections to retailers from Oct. 3 to 5 at Le 8 Vavois, located at 8 Rue de Valois. Besides the showroom space, Americans in Paris provides sales, marketing and media support to participants to help them expand their businesses.

Tumi is the initiative’s lead sponsor for the fourth season. Michael Petry, creative director of Tumi, said: “This being my first season with the program, I have tremendous admiration for this talented group of designers, and I am eager to see how the brand can further extend our partnership with each in the future.”

Satu Maaranen, Hyères’ past winner, will present her collection inspired by the Seventies freedom and Asian garments including kimonos, plus most of her signature prints. Joining her for the third Paris edition are fellow Aalto University fashion program alumnae Saara Lepokorpi, behind the Lepokorpi label, and Lilli Maunula and Laura Juslin of Juslin Maunula. The presentation on models at the Finland embassy, Oct. 2 from 7 to 9 p.m., will be followed by a party.

Belgian labels presenting at the No Season showroom include A.Knackfuss, Emmanuelle Lebas, Gioia Seghers and Léo.

It’s the second edition of the AFA Showroom, a platform for Austrian fashion talents.