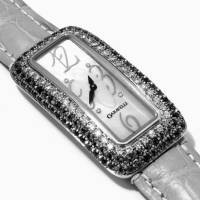 MILAN — Italian timepieces are trying to carve out a place to shine in the crowded watch galaxy.

“Italians are known for their fashion and design sense,” said Ali Soltani, president and owner of Ritmo Mundo watches, a year-old company that makes watches in Italy. “In the past, Switzerland had a monopoly, but now Italian watches are finding a lot of success.”

For these companies, an Italian watch is closer to a fashion accessory than a status symbol, such as venerable Swiss brands Rolex and Patek Philippe that are often pigeonholed in classic designs and tradition. In recent months, many celebrities and socialites have been seen sporting Italian watches, including Carolina Herrera, Usher, Moby, Sean Combs and Celine Dion, which has helped raise the brands’ profile. Hip-hop impresario Russell Simmons has taken his interest a step further by purchasing a stake in the fast-growing Grimoldi watch brand.

Italian watches are generally known for their bold color, a trend that has percolated in part from the fashion runways. Many styles sport colorful straps and faces, as well as a candy box of colored stones, from black diamonds and pink tourmalines to yellow sapphires and green peridots. An oversized watch face is another key detail seen in many Italian watch styles.

While there are no sales figures available for the Italian watch industry, the total value of Swiss watches and movements exports in 2001 was $7.62 billion.

“Compared to 10 years ago, people’s perception of a watch has changed drastically,” said Ernesto Alba, general manager at Locman. “Today, a timepiece is viewed as a fashion accessory, which is why we focus on design rather than complicated mechanisms.”

Françoise Izaute, corporate marketing manager at Pasquale Bruni, the Italian jewelry firm that introduced timepieces a few years ago, said: “The strength of Italian brands is an unbiased design approach and color over sophisticated mechanisms.”

So rather than competing with the Swiss and their long tradition in the craft of assembling intricate mechanisms, Italian manufacturers are taking advantage of Swiss watchmakers’ skills for what goes inside the watch. Most Italian watches tick away with Swiss movements, allowing them to funnel their resources into the aesthetics.

Anselmo Grimoldi, who owns three high-end watch stores in Milan and launched a successful wholesale watch line in September 2001, said: “These days, the customer is looking for new brands, which aren’t overexposed, but that have the right requisites in terms of quality and design.”

Mark Udell, chief executive officer at London Jewelers, the high-end watch and jewelry retailer based in Glen Cove, N.Y., is doing well with Panerai and Locman watches. Udell said he’s been impressed by the efforts Italian designers pour into the creation of new styles.

“There’s no question that Italian watchmakers are daring and like to turn out big and bold shapes that have interesting prices,” Udell said. “Our customers regularly travel to Italy where they see all these new styles and come back to the States requesting them.”

Pomellato, the high-end goldsmith, is banking on Stress, the new women’s watch that bowed in September. By yearend, ceo Francesco Minoli said he expects to sell 1,600 units in Pomellato’s 18 freestanding boutiques and hopes that by 2005 the watches will account for 10 percent of total sales.

“The watch gets its names from all the headaches we got designing it because, from a visual standpoint, we were eager to offer an innovative and strong product that you either like or you don’t,” said Minoli, noting that the watch deliberately has no logo.

Giorgio Grassi Damiani, vice president at Damiani, the upscale jewelry firm, said a strong-selling style lately is Ego Oversized, a man’s watch that was introduced last May following in the footsteps of the women’s style called Ego.

“We know we can’t compete with Patek Philippe or Breguet, yet we can deliver a high-end product that mixes design, quality and a sensible price for everyday pleasure,” Damiani said.

Damiani’s Ego Oversized comes in seven styles, from a chronograph to a GMT version, all available in Damiani’s 25 boutiques worldwide, plus 13 selective jewelry stores in Italy. Characterized by a thick, square steel case and an automatic Swiss movement, retail prices range from $1,850 for the basic version to $2,850 for the chronograph.

At times, though, these timepieces do compete with classic brands. “Our watch collection was an instant success because, in the consumer’s eye, it was similar to Chopard, but not as pricey,” said Elisabetta Molina, marketing manager at Garavelli, a Valenza-based jewelry company founded in 1920.

With an eight-year-old watch collection, which Molina describes as “bracelets that tell the time,” the timepieces include a basic version, which consists of a colorful face, a python strap and two rows of colored stones, as well as an allover diamond pavé version with a $9,000 wholesale price tag. Chopard’s watches, meanwhile, retail on average for about $12,000 to $15,000, although prices go up to $1 million for special items.

Pasquale Bruni, owner and designer of the eponymous upscale jewelry company based in Valenza, also ventured into the watch sector in 1998, before many of his peers. The watches, carried in the same 400 sales points as the jewels, now account for 10 percent of Bruni’s $31 million in annual sales.

Bruni’s automatic watches have a steel case with colorful round faces and matching leather straps. Some styles have colored diamonds and sapphires and chronograph movements, and prices range from $2,100 to $4,600.

Marco Rota, the owner of a small namesake jewelry company that annually churns out 2,000 pieces of handmade jewelry, also extended what he calls his “creative outburst” to watches. The Swiss-made watches, which retail for $500, have a brilliant-cut glass front and a selection of eight primary colors, from turquoise to banana yellow.

“I love watches and I like the idea of having fun with something different,” Marco Rota said. “As the hunger for Italian timepieces steadily grows, so does the profile of the celebrities that wear them.”

The success story of Grimoldi’s oversized Swiss-made watches began a year ago when actress Carol Alt purchased one. Designed by Giorgio Grimoldi, one of Anselmo’s four children, the brand sold 5,000 units in one year, forcing the family to turn down requests so as not to compromise the quality. The U.S turned out to be fertile turf for Grimoldi’s watches, now available at Saks Fifth Avenue, Neiman Marcus, London Jewelers and Tourneau.

Produced in three sizes, the watches are inspired by the natural surfs and corals of Mexico and feature a self-winding movement, a screw-down crown for water resistance and crocodile straps. The face has Arabian numbers and leaf-shaped hands, and the retail price tag is $1,850.

Nature inspired Locman, an Italian watch company that made a splash on the watch scene in the mid-Nineties with timepieces carved from briarwood, typical of the Isle of Elba, off the Tuscan coast, where the company is headquartered. The bold squared-off cases, avant-garde materials and affordable prices quickly catapulted Locman into the watch stratosphere with an annual production of 300,000 pieces that translated into $60 million in sales this year.

The retail price list spans from about $290 for the basic Tonneau style in aluminum to a maximum of $6,000 for one timepiece with three carats of brilliant-cut diamonds. The company is now researching ways to develop titanium.

Ritmo Mundo, meanwhile, is now sold in about 50 stores in the U.S, including some Saks locations and Hyde Jewelers. With prices between $900 and $1,200, Ritmo offers fashionable styles that don’t break the bank. The collections are made in stainless steel with colored straps and the case shapes include rectangular and oval styles.

Soltani, who is based in Beverly Hills, although the watches are made in Italy, said he has invested heavily in marketing and advertising, and since he is located in Los Angeles, he has worked with celebrities and stylists and is also pursuing product placement in movies. In addition, he is building his international distribution and the brand is now sold in 10 countries, including South Korea, Germany and Kuwait.

“We are not a fad,” Soltani said. “There are a lot of watches in the market now, but we feel we are here for the long term.”