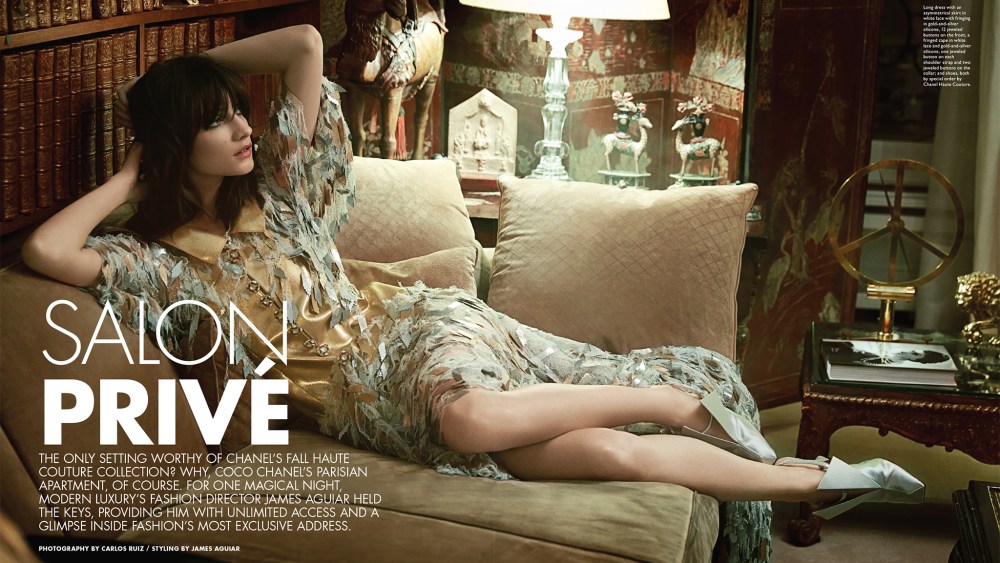 HAUTE COUTURE COUP: Modern Luxury has earned bragging rights: the regional magazine publisher was the first to get its hands on Chanel’s fall 2015 couture just hours after the collection debuted on a Paris runway on July 7. It came about after James Aguiar, national fashion director, previewed the collection during a New York market appointment and started a dialogue with the brand; he knew he would be able to dedicate several pages to the collection if granted access to it for a shoot. The subsequent eight-page editorial, featuring Martyna Frankow at IMG and shot by Carlos Ruiz, appears in the upcoming November issue, which hits stands later this month and bows online today.

Aguiar was also given access to the ultimate shoot location: the late Coco Chanel’s private apartment at 31 Rue Cambon. “I saw the Chanel couture show in the morning and made my selects, and then we shot [that same night] from 9 p.m. to about 5 a.m.” said Aguiar. “It was an intense night, but you can imagine the energy in that apartment. Not only were we in fashion’s most iconic address, but we were dealing with couture that barely anybody had seen….None of it was lost on us.”

In the editorial, Frankow lounges about Mademoiselle Chanel’s former abode in seven different couture pieces, including one of the show’s finale looks: a silver lace and metallic tea-length dress with buttons down the back. “We had this vision of this modern Chanel muse who had been out all night and who was just relaxing at home,” Aguiar said. “It speaks to our reader, and to the fantasy and the dream that I want to portray in the pages.”