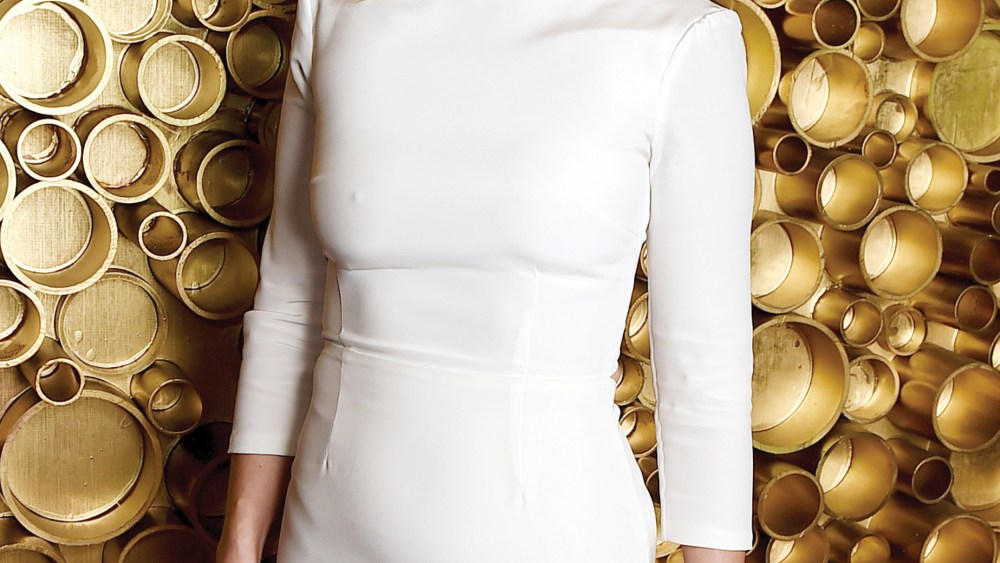 January Jones was recently in Paris to reveal her latest role — as the face of Kérastase’s Nutritive hair-care line.

“I don’t endorse a lot of things unless I really believe in them,” she said, fresh from finishing season two of “The Last Man on Earth” TV series. “So when Kérastase approached me, it was a no-brainer, because I had been using the products for over a decade.”

Her belief that hair is a signature of identity is in sync with the L’Oréal-owned label’s philosophy, according to Vincent Nida, Kérastase international general manager.

“She has had this emotional connection with the brand, and believes also in the power of hair and using it as a mode of expression,” he said.

The actress — who appears this month in a worldwide ad campaign lensed by Luigi & Iango — has been chameleon-like with constantly changing hair cuts and color. But Jones feels most comfortable as a blonde, her natural hue.

“I haven’t been coloring my hair, like, for over a year,” she admitted. “I’ve just been doing little highlights here and there, to give my hair a rest. But I always like going back to this, ’cause it feels the most like me.

“I have gone black, brown, red, pink. You feel immediately different, so it’s nice to have a change. Or if you’re doing it for a character, it feels good to feel different from you,” continued Jones. “I think, unfortunately, a lot of the times we get wrapped up in our audience’s perception of us. I think that’s why it’s always been important to me to look different in every role just so that I’m not stuck in one category or perception of beauty or whatever it is.”

As Betty Draper in “Mad Men” — the part she played longest in her acting career — Jones was often likened to Grace Kelly. It turned out to be a double-edged compliment.

“It was flattering,” said Jones, noting Kelly was the TV character’s beauty icon. “She tried to look like her and did her hair like her.

“I’m very flattered, as well, but it’s just too much responsibility for me to be the next Grace Kelly. She was a princess, and she wasn’t flawed,” Jones said. “I feel like I personally want to be able to be flawed and make mistakes — whether in life or beauty mistakes. I do consider her a great beauty icon, along with Marilyn Monroe. I love Veronica Lake and Liz Taylor. There are so many [greats].

“And I love modern women. One of my friends, Diane Kruger, always looks fantastic, and Charlotte Gainsbourg and Sienna Miller. I think that what’s great about modern beauty is…there’s not a set mold,” she continued. “You need to look like you; you can look like you’re from any period of time and still be chic.”

Jones called her outlook on beauty “simple” and said the Kelly comparison compelled her to veer in a different direction.

“I went the other way with it and did all kinds of avant-garde things on [red] carpets and stuff instead to pull away from that perception,” she said. “I like to do things that are a little bit bold and even outside of my own comfort zone. Just to try new things, things that are wild or more creative. I love having that because I always see a red-carpet experience as a way to be artistically creative with my dress and my hair and makeup.”

Jones sported a strapless jade Ulyana Sergeenko jumpsuit at the 2015 Emmys; a J.Mendel jumpsuit in bordeaux and black at the 2015 CFDA Fashion Awards, and a bright red Versace dress with a plunging neckline at the 2011 Golden Globe Awards, for instance. Beauty-wise for the 2013 Met Gala, she wore an updo made with braids and bold black eye makeup creating wings on each side of each peeper.

“Sometimes those red carpets are very intimidating, and to have a character in mind or an inspiration or story I’m trying to tell always helps me,” Jones added. “So if I’m trying to be David Bowie or Tilda Swinton or Siouxsie Sioux…it kind of helps me get through the anxiety of having to do a red carpet. So I always have to collaborate with my hair and makeup [creators] and stylists to come up with some cool, modern character.”

In part, Jones’ mother gave her a sense of adventure.

“She loved trying out new things,” said the actress. “I think that’s probably the best thing I learned from her — just to take a lot of different risks. Especially in the Eighties, when we were little kids, she would do a lot of different things with her hair and perm our hair and give us weird haircuts,” Jones continued, explaining the life lesson learned was that trying something new doesn’t mean one has to stick with it. “Hair grows back.”

From “Mad Men,” she learned to love a red lip better.

“I wish I could wear a girdle more,” Jones said. “It gives you nice posture and a very cinched waist. Girdles are so uncomfortable, though, so I wouldn’t wear one regularly.”

Her hair regimen includes using a Kérastase mask every three days — a routine she’s followed for more than a decade — the brand’s serum on wet tresses plus frequent trims.

“For me it has always been about the scripts; it’s about the story and the women in particular,” she said. “Betty was just a gift, because she was flawed and complicated, but also when you do a television show, you sign on to do [it] not knowing where the writers are going to take the character or how long it’s going to go on for.”

Jones lauded “Mad Men” creator Matt Weiner for having developed her character in so many varied directions with depth and layering.

Appearing on stage has been on her mind recently.

“I got asked to do theater for my break [from filming], and I turned it down for two reasons. One, it’s eight shows a week for however many weeks, so it’s a pretty grueling schedule and I just finished a long thing. And two, it scares me to death. I’ve never done it, and I’m scared to do it. But one day I will. I will push myself,” she said.

Jones’ policy is to keep her personal life private. (It’s known that she has a four-year-old son, Xander Dane Jones, but his father’s identity has never been publicly disclosed.)

“I had some advice given to me a long time ago from another actor, who said not to give people too much of your personal life, so that when you play a character, if it’s a very different character than who you are, people will believe it,” she said, giving another reason. “It helps me balance emotionally and mentally when I go home after work. I leave work there and focus on home, and that’s the only way I can be a good friend, a good mother, a good sister, a good daughter. I have to separate the two.”

It was particularly easy to shake off the Betty persona.

“With any period piece there is such a specific wardrobe and hair and makeup that when you look in the mirror you’re like: ‘Oh, that’s her,'” Jones said. “And at the end of the day you take it off and…mentally rid yourself of it.”

She admits that when it comes to television, she mostly watches “bad reality TV.”

“I do a lot of good TV, but I watch a lot of bad TV,” she said. “It’s my happy place where I don’t have to think about anything.”

Movie-wise, she’s got two favorites — “Gone With the Wind” and “Joe Versus the Volcano.”

“Meg Ryan plays three characters; she’s a genius in that movie. And Tom Hanks is adorable,” Jones said. “And the movie makes no sense.”

She revealed her first name comes from the book “Once Is Not Enough,” by Jacqueline Susann.

“It’s kind of like a naughty book from the Seventies,” said Jones, explaining her parents saw the TV movie version and chose the name before she was even a thought. “My dad liked it because it went with Jones. I was either going to be January Jones or Jared if I was a boy. But coincidentally, I’m born in January — so [that’s] the short answer when someone asks, especially…if a man ever tries to pick me up with a joke about my name.”