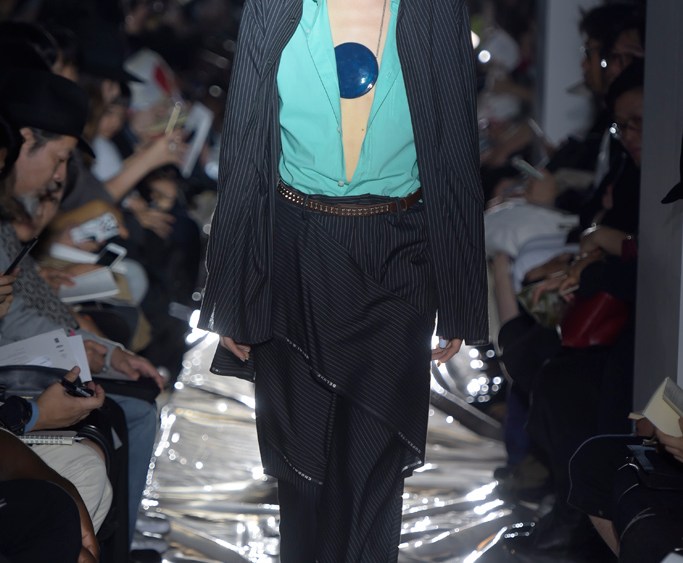 The shows, which ended their six-day run on Saturday, drew a total of 23,100 people, with the number of registered international buyers growing to 246, up from 239 in March and 221 last October. China was the country with the most registered buyers at about 50, followed by the U.S. at around 40 and Hong Kong at about 30. Organizers said that both Asian retailers and e-commerce sites were well represented this season.

“I thought the MBFWT [Mercedes-Benz Fashion Week Tokyo] was well-organized and the word is certainly getting out to other countries that it is a worthy stop on the show cycle, as much for the fashion shows as it is for the inspiring retail explorations that being in Tokyo affords,” said Bruce Pask, men’s fashion director at Bergdorf Goodman, who was invited to Tokyo Fashion Week by the Japan External Trade Organization, or JETRO.

For the third time in the past four seasons, retail and design consultant Nick Wooster was brought to Tokyo for fashion week as well. He was a jury member for the second Tokyo Fashion Award, which was given to six brands. Wooster said he has noticed more and more Japanese designers starting to design with global customers in mind.

He added that he thinks this change will prompt more international retailers to start sending representatives to Tokyo on buying trips.

“In this day and age, we’re all searching for content, you know, we’re looking for the newest, the most interesting, and a point of difference. And I think that it’s going to be imperative for retailers to start to investigate nontraditional avenues in order to differentiate themselves from their competitors,” he said. “And so I think places like Tokyo Fashion Week are an amazing laboratory to be able to start to do that.”

Wooster noted that scheduling is still a major hurdle in getting more international retailers to pick up Tokyo-based lines.

“I still think the number-one frustration that I know many people in the West have with working with Japan…is the limiting nature of their sales campaigns, where they run an exhibition for two days or three days, and yet it doesn’t necessarily run the same week,” he said. “So if you’re a retailer visiting from Europe or from the States and you want to buy three or four brands, it’s possible that each of those brands will have a selling exhibition in potentially five different weeks. Obviously brands like Yohji [Yamamoto] and Comme des Garçons and Issey Miyake, they paved the way. They understood that in order to play on the world stage they had to follow the same calendar, but unless or until all these other brands do that they’re never going to be able to compete with the rest of the calendar.”

Kazuyoshi Minamimagoe, senior creative director at Beams, said there is a boom right now in Japanese brands, and it is happening both overseas and domestically.

“In the fashion world, there is a strong sense both in and outside of Japan to sell Japanese creations, so stores like Beams and United Arrows are paying more attention to Japanese brands and looking for new ones,” he said. “So during this season’s Tokyo Fashion Week—until now there weren’t a lot of buyers from multibrand boutiques at the women’s shows — but this time I saw quite a few.”

Minamimagoe said that one of the strongest collections this season was from Lamarck, a brand designed by Shinsuke Morishita, which showed off the official calendar this season.

“This brand has an elegant kind of stylishness, but it also has a youthfulness that suits a boutique customer like that of Beams,” he said of Lamarck. “It has a very good balance of fashion and everyday.”

Other collections that Minamimagoe liked this season included Facetasm and Mint Designs. Facetasm, which only did a women’s show in Tokyo this season because it presented its men’s collection in Paris, is known for mixing tailoring with streetwear elements and an avant-garde style that is unique to Japan. This time, Minamimagoe said the women’s collection was even stronger because it also incorporated a certain elegance. Its designer, Hiromichi Ochiai, creates things that no other designer does, which Minamimagoe said is his strength. He believes this might have been Ochiai’s last show in Tokyo.

In the case of Mint Designs, Minamimagoe noticed some changes in the sensibilities of designers Nao Yagi and Hokuto Katsui, who he thinks also might be considering showing their collection overseas.

“Prints are a common feature [of their collections]. Until now they were always in light colors, but this time they were quite sharp, with black prints standing out. The styles as well, which are normally quite loose and soft, were sharper this time, with a kind of edge,” he said. “I got the feeling that this might be their last show [in Tokyo], and that Mint Designs might also be going abroad.”

Akiko Kitaya, a women’s apparel buyer for Sogo and Seibu department stores, said her top picks of Tokyo brands this season were Anrealage, which showed in Paris; Yasutoshi Ezumi, and Mame, which presents its collections at sales exhibitions rather than runway shows.

Of Ezumi’s collection, inspired by the work of Frank Gehry, Kitaya said, “The designs uitilizing reconstruction were very fresh.” She said that compared to a year ago, her budget for Japanese brands has increased this season. New brands that she is considering picking up include Akira Naka and Leur Logette, neither of which did a show this season.

“I get the feeling that the Japanese brands that already have their eyes on the global market spread their reach even further this season,” Kitaya said.

Shogo Terazawa, ladies’ apparel buyer at Isetan Mitsukoshi, said Facetasm was his favorite collection. “It was also a collection that really exuded the designer’s love of clothing in a strong way. The knotted designs and three-dimensional jacquard fabrics were new, and I expect a positive reaction from customers. There were many striking individual designs that have the possibility of becoming hits, so I think the response internationally [to this collection] would also be good.”

Overall, Terazawa was positive about the quality of the Tokyo shows but his budget for Japanese brands is decreasing this season by about three to five percent compared to a year ago.

“There’s the effect of the exchange rate, but the popularity of Japanese brands in the domestic market is also increasing. So we’re purposely trying to control our selection so that we don’t end up being the same as other stores,” he said.