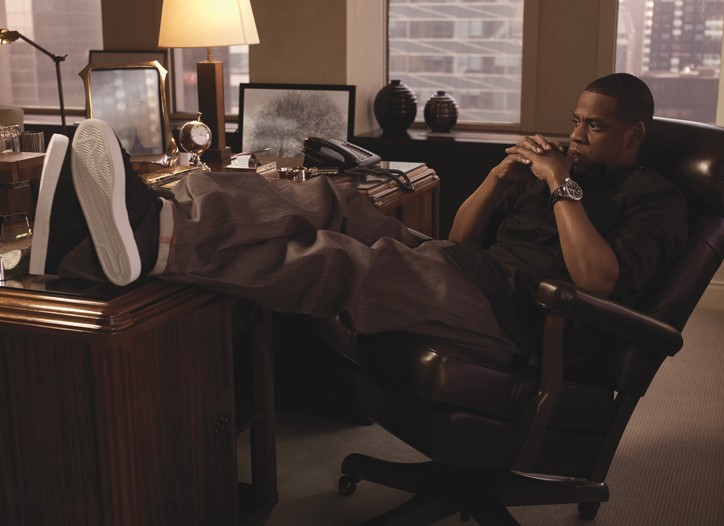 It’s late on a Tuesday afternoon and Shawn “Jay-Z” Carter has just returned to his office from a full day of filming a show about his latest album, “The Blueprint 3,” for BET.

“I am so sick of myself,” he said with one hand on each cheek, exhaustively sitting down behind the massive dark wooden executive desk in his office on the 38th floor at 1411 Broadway in New York. “I have been talking about myself all day. I really don’t like that.”

That statement certainly rings true for the 39-year-old (he turns 40 on Friday) hip-hop mogul. He’s known for being extremely private — he doesn’t allow anyone to set foot inside his office when he isn’t there, and he refuses to address questions about his relationship with his wife, pop star Beyoncé Knowles. He says the relationship “is the one thing that’s sacred” in a life so often on display to the public.

As one of the most successful recording artists of all time, Carter is probably also one of the most humble. He speaks often of his beginnings — growing up in Brooklyn’s Marcy Houses projects, where drugs and guns surrounded his everyday life. At nine years old, Carter witnessed the murder of a close family friend. At 11, his father, whom he says he looked up to and strived to become, left him and his family behind. By the time he was 13 years old, Carter was headed down the dangerous path of a drug dealer. He started dealing crack on local streets, often dodging bullets from gang members and other dealers in the area. He maintains he never did drugs, only sold them.

Carter has said he never had a grand plan to become the powerhouse he is today — and he refuses to refer to himself as a powerhouse — with annual sales quickly approaching $1 billion across all of his businesses. This empire includes RocNation, his talent agency; Roc-A-Fella Records; part ownership in the New Jersey Nets, 40/40 nightclubs, The Spotted Pig restaurant in Manhattan — and the keystone, Rocawear, which generates about $700 million annually at retail. Not to mention Carter has scored major endorsement deals for brands such as HP and Budweiser.

Besides these businesses, his own accomplishments in music are astounding. With 12 albums under his belt and 40 million albums sold worldwide (his latest has sold 1.3 million to date), Carter has had more number-one albums than any other solo artist worldwide. He’s won seven Grammy awards and founded and helped shape the careers of Rihanna and Kanye West. He even had a stint as president and chief executive officer at Def Jam Recordings, but stepped down in December 2007 in order to take on new projects.

He took a more active role in Rocawear in September 2005, after buying out co-founder Damon Dash’s 25 percent stake in the company for $30 million.

“Rocawear has always been part of the whole overall culture. It’s connected to everything that I do,” Carter explained. “So coming in full time was important to me. It’s something I really believe in and something I want to protect.”

Many say Dash left the business because the longtime friends had a major falling out. While this may be true, it’s just another thing Carter would like to keep private.

“Dame did a great job when he was here,” Carter said. “I just feel that I have a different way of running things, which I think is working out well. I let people make mistakes, and push them to be creative. I let a design team design. When they feel good about something they have created, it makes them want to do more. It makes them want to do their best. People are happy here. I’m not a controlling manager and I have a great team that makes me confident that things can run well when I’m on the road, and I’m proud of that.”

Carter said letting the designers have their freedom is key — especially since he isn’t one himself. First and foremost, he’s a musician, he averred, and while Rocawear is very much a part of the hip-hop lifestyle he leads, he doesn’t pretend to be something he’s not. He’s a natural in the world of rap, but even after 10 years in the apparel business, he said he is far from a natural at the design table.

The idea of starting Rocawear came about in 1997 when he and Dash, his partner in Roc-A-Fella Records at the time, noticed a clear new business opportunity.

“I would be onstage performing, and I noticed that all the kids were wearing Iceberg jeans,” he said. “The same jeans that I would wear. So we thought, ‘Why should we let Iceberg get all this business when we can do it ourselves?”

Acknowledging they knew nothing about running a fashion business, the two scored a meeting with Iceberg executives.

“We went in there with a plan to have our own line with them. We were going to bring them into this culture, which was on the rise,” he reminisced. “But in the end, it didn’t work out. We were naïve and were asking for way too much.”

So Carter and Dash set out to do it on their own. They went to a store and purchased three sewing machines and set them up inside the Roc-A-Fella offices. They had a plan to make T-shirts with the Rocawear logo on the front. In no time, they thought, fans of Carter’s music would rush the stores to buy their shirts.

“We didn’t know how to sew, and we didn’t really know people who knew how to sew, so we quickly realized that this just wasn’t going to work,” he laughed.

When that plan fizzled, Carter and Dash went after the advice of Def Jam and Phat Fashions founder Russell Simmons. Often referred to as the “godfather of hiphop,” Simmons set them up with Alex Bize and Norton Cher, who had a great deal of experience in apparel manufacturing.

“We met with Alex and Norton, and that was it — we started Rocawear,” Carter said.

To this day, Bize and Cher are silent partners with Carter on Rocawear and handle most of the manufacturing for the apparel.

The naïveté Dash and Carter carried early on also has faded. Though Carter’s fame has skyrocketed since 1997, he refuses to call Rocawear a celebrity brand.

“If I focused on that, no one would buy the clothes,” he said. “People rely so much less these days on the logo. They want quality product, which is what I want Rocawear to be known for — we make a damn good pair of jeans.…That’s why people buy them.”

To grow Rocawear, which has been Carter’s mission since taking his active role at the company, he knew he had to do something drastic. He said he sees a great deal of growth opportunity, primarily in women’s (men’s accounts for about 75 percent of the business), but he needed the infrastructure to do what he wanted to.

So, in April 2007, he agreed to partner with Iconix Brand Group, which acquired the Rocawear brand for $204 million in cash. In the deal, Neil Cole, Iconix’s ceo, became Carter’s partner and in turn, Carter was going to help Cole with future Iconix deals.

“I got to know Neil, and we now have the same mission: Our goal is to make Rocawear a $1 billion company,” he said. “It may take us more time than we would like since the economy is in the shape that it’s in, but I’m confident that we will get there.”

Also in the plans, Carter said he’s scouting for new brands to acquire and operate under the Rocawear umbrella. The company is set up in such a way that they have the resources to run other brands, he said.

“I have my eye on a lot of brands,” he said. “I feel that we can really add our expertise in apparel to another brand at this point. We are ready for that.”

His biggest challenge, he said, has been the ability to grow the women’s side of the business — but that’s a challenge he’s attacking head-on.

“It’s been tough with the growth of fast-fashion retailers out there like H&M and Forever 21,” he said. “It’s made things really difficult for the women’s side of the business. That, paired with the closings of so many specialty stores in this economy, we are still trying to figure out what to do. It’s hurt us a lot.”

But, Carter said, he is determined to rise above the challenges. With the music business, he said, executives were blindsided by technology and didn’t know what to do when downloads became more popular than CD stores. He doesn’t want to see the apparel industry — especially Rocawear — get blindsided by competition from fast-fashion retailers.

“It’s difficult to make jeans digital, so I’m not so worried about technology getting ahead of us,” he quipped. “But there are certainly a number of challenges we have to meet as a fashion brand.”

Every day at Rocawear, Carter said, is a learning experience for him. He admits he’s made some mistakes, but refuses to dwell on them. Rather, he strives to learn from them so they don’t happen again.

One of his biggest mistakes? “We really should have done some Rihanna Rocawear umbrellas when that song became a hit. We could have made a load of money on those. I’m still kicking myself.”