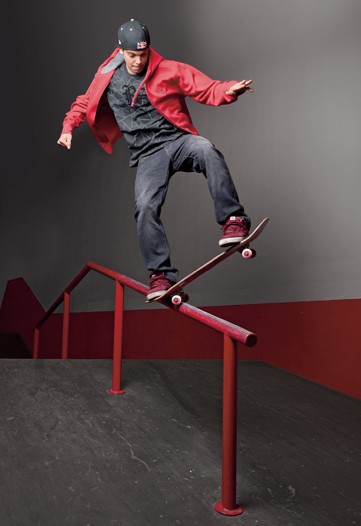 In time for the back-to-school selling season, the $18.5 billion retailer will unveil three new brand partnerships in an effort to strengthen its position as a dominant retailer in the young men’s market.

The brands that will hit 600 of Penney’s top doors and online July 11 are: RS by Sheckler, a skate-oriented label from Wicked Fashions and professional skateboarder and MTV reality star Ryan Sheckler; Third Rail, a Zoo York Production from Marc Ecko Enterprises, and Rusty, the popular West Coast-based surf brand.

After Penney’s identified surf/skate as a “growing category,” Lawrence said the retailer “worked diligently to fill the white space” within its stores. Right now, he noted, only Vans fits the bill for this customer.

“We knew that this kid wants to be authentic, core and true,” he added. “That was our criteria, so we landed on these [brands].”

Penney’s, which has about 1,070 stores across the U.S., declined to provide a volume projection for the brands.

The push in young men’s comes at a pivotal time for the Plano, Tex.-based company. Like almost all retailers, the chain has been struggling during the recession and, in February, reported a 51 percent drop in fourth-quarter profits to $211 million, down from $430 million a year ago. Sales declined 9.9 percent to $5.76 billion from $6.39 billion. Comparable-store sales in the quarter fell 10.8 percent. For the year, income decreased 48.5 percent to $572 million from $1.11 billion in 2007. Sales were down 6.9 percent to $18.49 billion from $19.86 billion.

Lawrence said the company’s overall men’s business is “mirroring the store” with value pricing and innovative merchandise being the two key drivers of sales.

Men’s apparel and accessories overall account for 19 percent of Penney’s business, according to its 2008 10K filing. Although the firm does not break out figures for specific categories such as young men’s, it has traditionally been an area of strength. Penney’s ranks second in market share in young men’s after Wal-Mart Stores Inc. and third in overall men’s after Wal-Mart and Macy’s Inc., according to NPD Group research data. “But we’re about neck-and-neck with Macy’s,” Lawrence said.

Last week, the retailer announced the launch of Cindy Crawford Style, a new line of home furnishings and accessories by Cindy Crawford, which will hit stores in September.

But for b-t-s, the emphasis will turn to young men’s.

When these labels hit stores, they will join Arizona, a $1 billion-plus private brand, American Living, Levi’s, Southpole and Avirex in the young men’s department. In addition, Decree, a successful juniors private brand, is being extended into young men’s for b-t-s.

Ken Hicks, president and chief merchandising officer for Penney’s, said the addition of RS, Third Rail and Rusty allows Penney’s to “further connect our strong base of young customers to an emerging action sports culture. These partnerships underscore our commitment to deliver exceptional, stylish brands that respond to the needs of our customers, making aspirational surf and skate brands available at affordable prices that make sense for teens and their parents.”

RS by Sheckler will feature T-shirts with skate-inspired graphics, as well as hoodies, thermals, woven tops and jeans for young men and boys. Retail prices will range from $26 for a T-shirt to $55 for jeans.

Sheckler, the professional skateboard icon and star of the MTV reality show “Life of Ryan,” said although he still endorses core companies in the skate industry, RS by Sheckler allows him to provide a more affordable option for everyday wear.

“My goal was to take the clothes that my friends and I enjoy wearing and make them available to a larger audience at a great price,” he said.

Rusty, known for its authenticity within the surf industry, will offer graphic Ts, shorts, boardshorts and hoodies for young men and boys. Retail prices will range from $26 for a T-shirt to $55 for shorts and hoodies.

Toby Bost, chairman and chief executive officer of Rusty, a subsidiary of the La Jolla Group, said the weak economy has triggered a fundamental “shift in focus” toward providing merchandise at “affordable prices. And it’s hard to find top-notch retailers who have that natural audience. But with this new platform in action sports, it makes sense to align with [Penney’s]. And we’re ready to partner with a retailer that size.”

Rusty, which also counts O’Neill, Lost and Metal Mulisha in its portfolio, is also sold at core surf shops and national chains such as Pacific Sunwear. Bost said the Penney’s merchandise will not strive to address the needs of actual surfers but will focus more on “casual beach lifestyle.” Many of the fabrics will be similar, but the styling will have “more mass appeal.”

In terms of marketing, Bost said it is “important for us to tell the Rusty story,” and his company will work with Penney’s to install the proper “scenic imagery” to highlight the brand’s heritage.

Third Rail, a Zoo York Production, is intended to satisfy customer demand for more-edgy merchandise with T-shirts, woven tops, shorts, jeans and jackets. Retail prices range from $26 for Ts to $50 for jeans.

Jeff Strumeier, president of Third Rail and Avirex, said the association with Penney’s goes back four years when Avirex was added to the mix. That line has performed well, leading the retailer to turn to the company when it was seeking to bolster its action sports presence. “Steve Lawrence has always looked to Ecko [the brands’ parent] as the incubator of cool,” he said.

The result is a “collection inspired by the youth culture” that “recognizes the synergies between surf/skate and the urban lifestyle,” Strumeier said.

However, Marc Ecko Enterprises, faced with having to pay down a large debt load, may sell off Zoo York, which it acquired in 2001, to focus on its core Ecko Unlimited brand. Strumeier remains upbeat about the prospects for the new label. “This is a breadwinner,” he said.

Lawrence said the addition of the young men’s brands is part of Penney’s quest to offer more lifestyle merchandise. Penney’s breaks its mature men’s offerings into three subsections: traditional, neotraditional and modern, but in young men’s, the offerings are broader. “We have a lot of buckets,” he said, including all-American, urban/hip-hop, surf/skate and West Coast/contemporary.

The all-American offering centers on the Ralph Lauren-designed American Living label and Arizona, and the urban customer is served with Southpole. West Coast style can be found in Whitetag and Avirex.

Lawrence said each of the new brands will have a distinct zone on the sales floor with the appropriate ancillary marketing materials. There will be “fixture and visual enhancements and back-wall signage,” he added. “We’re trying to define the zones on the floor.” How the lines will be marketed in advertising and online has not yet been determined.

Despite the tough economic climate and the challenges to retail, Lawrence said Penney’s is “definitely not trying to retreat or contract. The customer is responding to newness and that’s what we’re going to give him.”