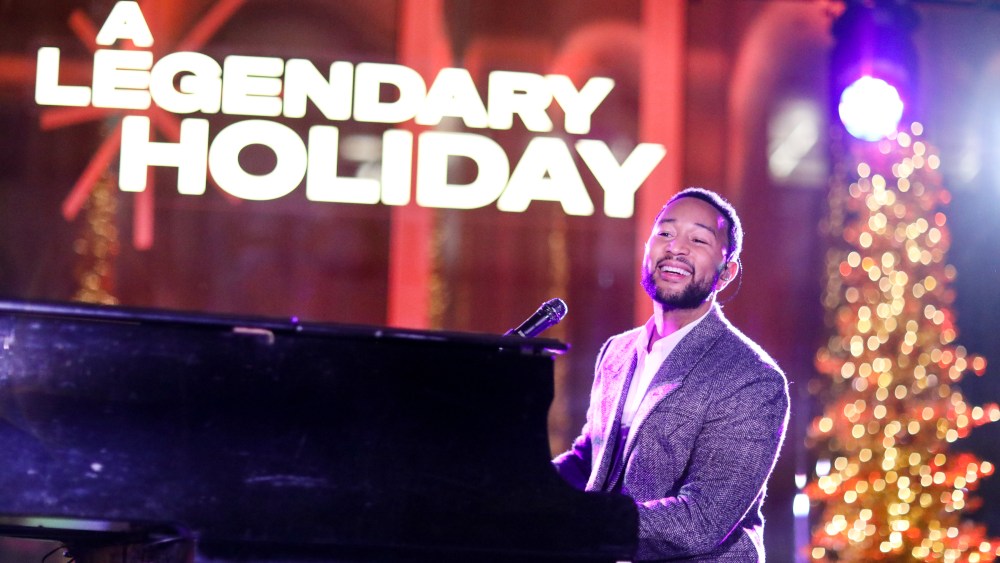 John Legend rocked the house at Nordstrom and Sperry’s “A Legendary Holiday” event on Friday at the Nordstrom Midtown Manhattan location.

The singer and songwriter commemorated the launch of his shoe collection with Sperry at the store, performing a mix of his hit songs for hundreds of guests including “Ordinary People” from the album “Get Lifted”; “Save Room” from his second album “Once Again,” and classic Christmas tunes like “Have Yourself a Merry Little Christmas,” featured on his first Christmas album “A Legendary Christmas.”

Legend, who is the first Black male to win an EGOT (Emmy, Grammy, Oscar and Tony Awards), celebrated the holidays with Sperry last year in similar fashion, also to celebrate joining the company as a brand ambassador in 2020, but virtually due to lockdown rules for the pandemic.

“I’m just grateful,” Legend said about performing for a live audience again. “I’m grateful that scientists developed the vaccine so we could feel safe about being out together in public again. When it’s deprived from you for over a year, you definitely appreciate it after awhile and you miss it, and it’s been fun being out there again.”

Legend has many warm memories of the holidays, growing up in a musical family singing around the piano every Christmas — “I tried to carry on that tradition by making my own Christmas album,” he said — but he considers his fondest memory to be proposing to now-wife Chrissy Teigen in the Maldives almost exactly 10 years ago. Today, they celebrate the holidays with two children — five-year-old Luna and three-year-old Miles — who Legend said love his Christmas album.

“We love Christmas music, we love holiday music and singing together,” he said. “My kids love [the album] and they listen to it all year round in fact. But we love to cook, too. Chrissy is the queen of the kitchen, but she loves to invite us all in. The kids will make desserts with us, cook with us and have fun with us in the kitchen so that’s part of our holiday celebration, too.

And in regards to what Legend is looking forward to getting this Christmas at Nordstrom, “I don’t really make wish lists,” he said, and he prefers to think of what he can give rather than what he is receiving.

“I have literally everything I could possibly need, but I always think about what I can give to other people so I’m making sure that we’re taking care of our kids and giving to people I don’t know through donating. We always try to do much of that especially, during this time of year.”

In addition to designing a capsule collection for Sperry, Legend spent much of this year working on his next album. He recently signed a new record deal with Republic Records after 17 years with Sony. His next album, which is expected to be released in 2022, will be his first on the new label.

“We’re getting close to finishing it up,” he said. “It’s going to be fun. I had a lot of fun making it. The whole first half of the year was working on that and then I went on tour this summer and it’s just been a fun musical year and I’m excited for everyone to hear what we’ve been working on.”

And is a holiday album on Republic in the cards? “It’s possible but the next thing you’ll hear will be a traditional John Legend album.”