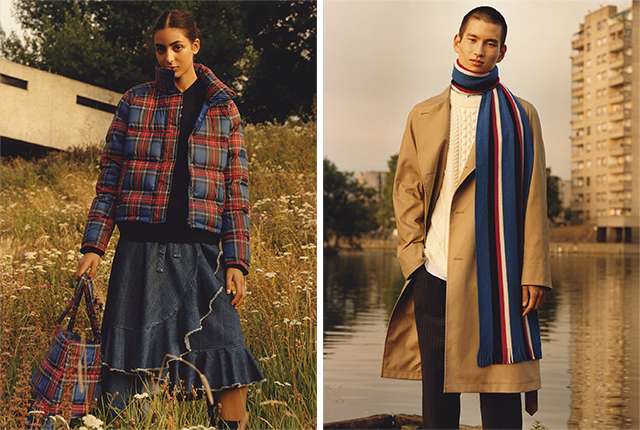 LONDON — Uniqlo had an all-or-nothing approach to its latest collaboration with J.W. Anderson, a 33-piece collection of British-inspired classics that debuts in the U.K. on Sept. 19.

For fall 2017, the Japanese retailer had wanted to highlight the British origins of its basic clothing ranges, and, according to Uniqlo’s Yuki Katsuta, there was only one person who could help: Jonathan Anderson.

“We were thinking, should we do it ourselves, or should we ask somebody else? But then the answer was clear. We should ask the greatest designer from Britain,” said Katsuta, senior vice president of Fast Retailing and Uniqlo’s head of global research and design.

During an interview at Tate Modern on Tuesday, Katsuta said he was happy Anderson took his call, otherwise the British-focused project would not have happened.

The result is a collection of quirky classics for men and women covered in J.W. Anderson’s fingerprints and made with Uniqlo’s know-how — and price tags.

Among the highlights is a duffle coat and a belted tweed one, a reversible trench with tartan lining, a denim midi-skirt adorned with big ruffles, and a lineup of Fair Isle knits and T-shirts with naïf sketches by the French artist and sculptor Henri Gaudier-Brzeska.

Anderson said one of the reasons he agreed to the project was that his brand is British, based in London.

“I wanted to tackle something that was this idea of British classicism, the British wardrobe, knitwear, shirting, the iconography of Britain. I also wanted something that was kind of a twist on classics. I shop at Uniqlo, so it was important for me that it had this kind of personal reality to it — that was the big clincher. It’s a personal project, that’s what defines it,” said Anderson during the interview in a bright meeting room inside Tate’s new Blavatnik Building.

Anderson, who was dressed in boxy jeans from the collection, inspired by denim workwear from the first half of the 20th century, said his approach also involved looking at British and Japanese cultures and how they influenced each other. “It’s this idea of a crossover. I also wanted it to kind of have this outdoor, naturalistic image, this idea of where clothing is today, that when you buy something it’s you who makes it.”

Anderson conceived the collection as a “shared wardrobe” between men and women, and spent just as much time on it as on a runway show. “I put the same value on a Uniqlo T-shirt as I do for a J.W. Anderson or a Loewe one. They all have the same metrics for me,” said the designer, adding that he was also able to try things he’s always wanted to do.

“I’d never made a puffer jacket, so it was important to do one. Actually, we tried to do a puffer jacket once, a long time ago, and it wasn’t really successful. When you make one, but you don’t have the technology for it, it can become very heavy, but this one is super light. We were able to come up with incredible knitwear and this amazing sweater with a fish,” he said, pulling out a gray crewneck with a drawing by Gaudier-Brzeska.

In his quest to create timeless silhouettes, Anderson said he worked a lot on cut. “You have to boil it to the essence,” he said of the duffle, adding that his team and Uniqlo also spent a lot of time trying to work out different color ratios on knits and the long, striped college scarves.

The collaboration, Anderson said, has influenced his J.W. Anderson collection. That came through loud and clear on the Pitti Uomo runway last month, where the designer debuted his spring 2018 men’s lineup. Anderson swapped his usual androgynous, conceptual creations for updated takes on men’s wear staples, such as the biker jacket, bomber, jeans jacket and hoodie.

“It is quite an amazing moment, because I feel like everything has been thrown up in the air, and we’re entering into a moment where there is nothing more important than reality. I want people to go into the store and, whether they know the brand or not, they pick up something that is a democratic product. Anyone can go in to Uniqlo and buy it, and that’s what excites me. It is nice to be able to open up and for different audiences to be able to engage with the products,” he said.

Prices range from 14.90 pounds for a T-shirt with a Gaudier-Brzeska sketch — similar to one Anderson was wearing for Tuesday’s interview — to 139.90 pounds for both the tweed and trenchcoats.

No one is ruling out a second J.W. Anderson for Uniqlo collaboration. “You never know. Let’s get this one done first,” the designer said. The fall 2017 collection, first revealed in March, will roll out to international markets following its launch in the U.K. on the last day of London Fashion Week, which runs from Sept. 15 to 19.

The collaboration with Anderson is the latest in a long line of creative projects between Uniqlo and  designers, individuals and brands including Jil Sander, Disney’s “Beauty and the Beast,” Inès de la Fressange, Carine Roitfeld, Christophe Lemaire and the artist Kaws.