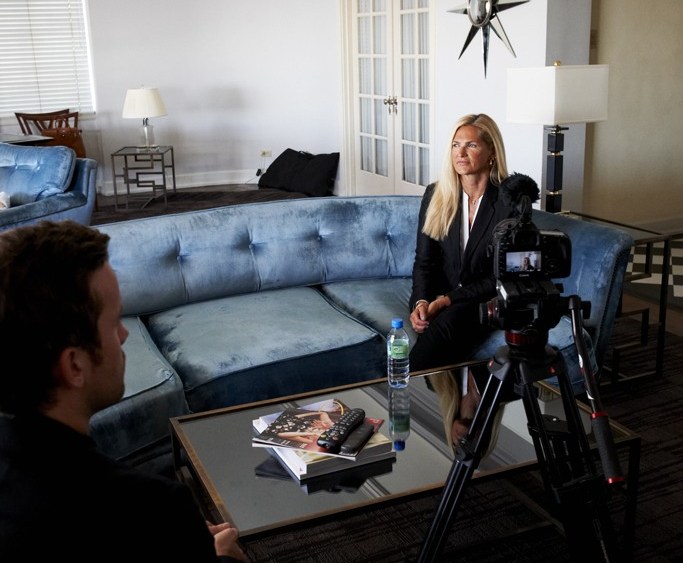 LOS ANGELES — The digital space is about to get Juicy.

As part of Juicy Couture’s evolution under the helm of chief creative officer and president LeAnn Nealz, the Fifth & Pacific Cos. Inc.-owned company will introduce a digital short film to promote its holiday collection on Nov. 15.

“The future is digital,” said Nealz, who was on the Chateau Marmont set Tuesday. “It’s the fastest and easiest way to get our message out there so it’s a natural investment.”

Launching on the company’s Web site, the Terry Richardson-directed film featuring Candice Swanepoel will be embedded with links to the apparel and accessories featured so that customers can shop while watching. The film is the focal point around which the company’s new digital and social media strategy is based. Timed with the film for the holiday shopping and gifting season, Juicy will adopt the hashtag #givemewhatiwant as a transmedia and multiplatform strategy to engage its customers in a two-way dialogue.

For example, there will be a contest on Instagram that asks customers to post pictures of their holiday wish lists while tagging @juicycouture and #givemewhatiwant. The winner gets a “California Dreaming” trip to Los Angeles and a $1,000 shopping spree at Juicy Couture. On Twitter, the company will activate a re-tweet #givemewhatiwant program; on Spotify, it will create #givemewhatiwant holiday music playlists, and on YouTube, it will create content under the same hashtag with bloggers.

The role of film and video has evolved at the company since Nealz took the helm two years ago. The first one, shot in tandem with the fall ad campaign, was directed by Inez Van Lamsweerde and Vinoodh Matadin featuring Karlie Kloss. The second, which the company used to show its spring collection during an event at New York Fashion Week, was directed by Zoe Cassavetes and also featured Swanepoel. It has since been shown in international markets and will also be used for consumer activation once the merchandise hits stores. The holiday film will be used in the digital space to promote sales and launch the #givemewhatiwant program.

“We think this new film with Terry will introduce a new audience to the Juicy brand,” said Nealz. “Terry has always pushed the envelope with his work, which has a very raw, subversive attitude. That bold, rebellious spirit is inherent to the Juicy DNA.”

In the minute-and-a-half video, Swanepoel is shown lounging by the pool, encountering friends in the hallway and attending a party at the hotel, all while decked in key holiday items such as party dresses, foil brocade jeans, glittery baubles and an updated velour track suit.

The company’s ad budget is up due to its digital buy because Nealz believes the customer is more plugged in and social than ever. “The Juicy girl is checking her Facebook before picking up the morning paper. She is Instagram-ing her dinner before taking a bite. Everything she does is online and that is where our brand has to be, at her fingertips,” she said.

“Because we consume content in new ways, our girl craves video that brings everything to life and inspires the natural online sharing that has become part of our culture,” she continued. “When we look at the strategy behind video content, we also look at how it’s syndicated, from blogs to Facebook to stills on Instagram. You can’t just build a video and hope people will see it, it has to be incredibly compelling and delivered in a smart, fresh way that travels online.”

On the retail front, the company continues to make over, or “re-Couture” its U.S. stores, and in many key cities to reconsider store locations and strategically relocate some. The company made over 11 U.S. stores in 2011 and is making over another 13 this year. Its international plan is slightly more ambitious, concentrating on opening new doors in South America and Asia and engaging new international regions over the next five years.