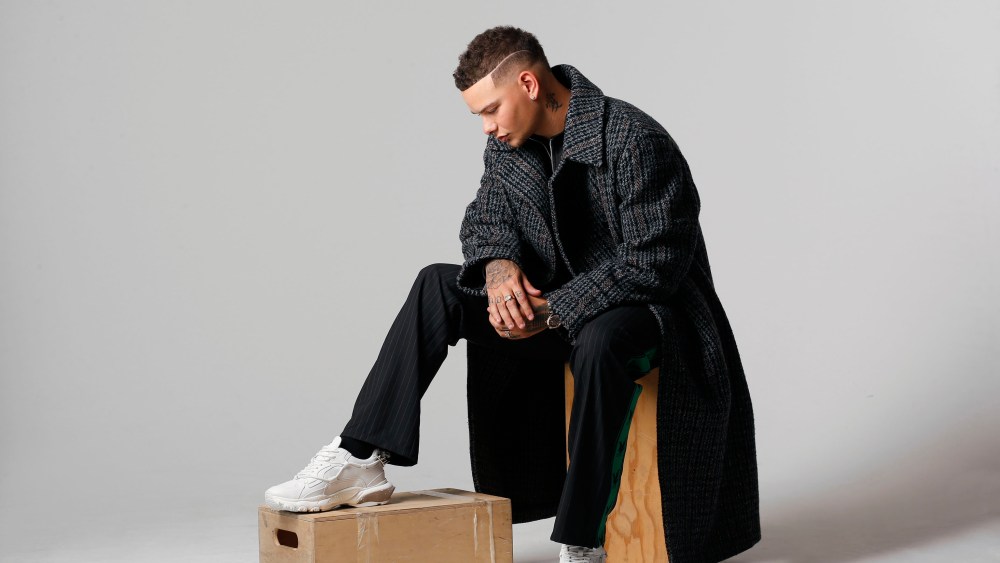 Kane Brown is a man of few words. But while he may be reticent in person, his song lyrics and social media presence speak volumes.

Two years ago, the now-25-year-old started turning heads within the country music community. He was different — he’s biracial, has visible tattoos on his hands, knuckles and neck, wears diamond studs in his ears and sports a fade haircut. Instead of Wranglers and cowboy hats, he’s more partial to Off-White, Amiri and Yeezy sneakers, and is the only country music entertainer to be signed as a brand ambassador for New Era caps.

He didn’t take the traditional road to stardom either. Instead of cutting his teeth in church and dive bars throughout the South, Brown made a splash on Facebook by releasing several covers of country classics — George Strait’s “Check Yes or No” and Lee Brice’s “I Don’t Dance” among them — that soon went viral.

“I was working at FedEx and Target and just doing it for fun,” he said of the videos. “I put it on social media and got around 50 likes. Then I woke up one day and saw that it had gone viral overnight.” He said in addition to his rich baritone voice, he believes it was the surprise factor that attracted fans. “When they looked at me, they thought I’d be rocking, but when they clicked on it, they realized it was country and it shocked the hell out of them.”

The social media exposure led to a record deal with RCA Nashville and his success so far has been impressive. At last month’s American Music Awards, he racked up the most award wins in one night for a first-time nominee, taking home three trophies in the fan-voted awards show for Favorite Male Artist: Country; Favorite Album: Country, and Favorite Song: Country for “Heaven,” tying Cardi B as the second most-decorated winner in all genres.

Today, Brown releases his second album, “Experiment,” on which he has writing credits on 11 of the 12 songs. Like his first album, this one too lays open a lot of what makes Brown tick.

The first record, his rap-flavored “Learning,” tells the heartbreaking autobiographical story of his childhood. He was raised by a single mom in Georgia and Tennessee — his father has been in jail since 1996 — was homeless and sleeping in a car at some points, beaten by his stepfather for wetting the bed when he was little, wore “high-waters with holes in my sole” in middle school, and worked hard to stay clear of drugs and guns. But despite the hardships, the chorus of the song centers around getting over it. “Forgiveness is something we gotta know,” he sings. “Because if you hold on forever, it’ll hurt your soul. That’s why I’m learning how to let it go.”

Interestingly, he shrugs off his tough upbringing, saying, “To me, it’s nothing new. I lived with it my whole life and learned to cope with it.” But by putting it out there in a song, he hopes to help other people know there is a light at the end of the tunnel.

In anticipation of the album release, he was in New York on a whirlwind media tour, headlined a sold-out show at the Hulu Theater at Madison Square Garden on Wednesday night and will be featured in the Macy’s Thanksgiving Day Parade. “I’ll be on the Mount Rushmore float,” he said.

Despite such a grueling schedule, he managed to carve out time to marry Katelyn Jae, a music management student and singer, in Franklin, Tenn., on Oct. 12, right after winning the American Music Awards. They squeezed in a few days as a honeymoon in the Smoky Mountains, horseback riding and drinking wine, she says, and hope to escape somewhere warm this winter when the chill settles in at their Nashville home.

That might be hard since Brown will kick off his first headlining tour, “Kane Brown: Live Forever Tour,” in Duluth, Ga., on Jan. 10, to support the new album.

The singer is just as exposed on the second album with cuts that he wrote for Jae, “As Good as You” — the video for the song shows all the highlights from their wedding — as well as the sobering “American Bad Dream,” which takes on the “messed up” issue of school shootings.

“That’ll be the song that’s the most talked about,” Brown says. “I feel like I needed something like ‘Learning’ on this album. I was nervous about it at first, I wanted to get the message right and write about something people don’t like to talk about in country music. I wanted to create awareness.”

That’s a microcosm of Brown as a person as well. “At first I tried to play it safe and blend in, but I can’t blend in,” he says. “So I own up to it and just be me.”

Being Brown also involves looking the part. He admits to a love for fashion, although had to be reminded that he wore a blue velvet Lanvin suit to his wedding. In fact, in the hour downtime he and his wife had between radio station visits and television appearances in New York, they went to Barneys New York, where he picked up a Gucci hoodie and Amiri T-shirt.

“I like dressing up and singing country music,” he says, pointing to another young country star, Thomas Rhett, as someone else who breaks the rules of the genre in both his style and his music.

With all his newfound success, what else does Brown hope to achieve?

“I don’t really set goals,” he says. “I just try to beat myself. If I have a platinum album, then I want the next one to be platinum plus.”