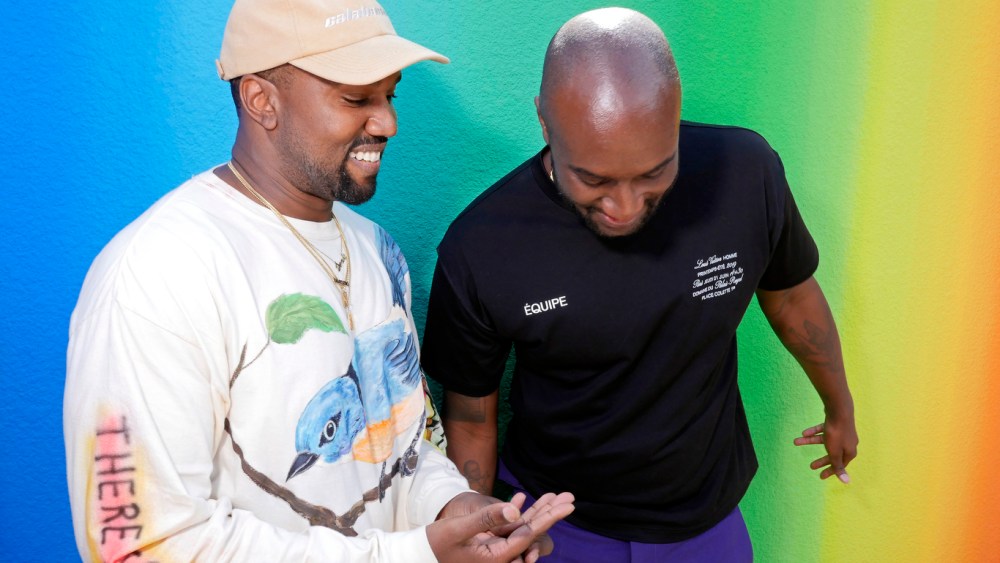 RUNWAY REUNION: It was a major gesture: Kanye West and Kim Kardashian West coming to Paris to attend Virgil Abloh’s debut men’s show for Louis Vuitton, marking the first time the couple has returned to the city since Kardashian West was robbed at gunpoint in a hotel here in 2016.

Joining them front row on the multicolored runway stretching through the Palais Royal gardens under a baking sun were guests including Kylie Jenner and Travis Scott, Naomi Campbell, Rihanna, A$AP Rocky and Bella Hadid.

“Today’s the big day,” said artist Takashi Murakami, adding of the happy runway: “It’s totally my thing. Actually, it’s a bit like a multicolor work I did 20 years ago.”

Surveying the scene in the green section, opposite the stage, Abloh’s sister Edwina said she had just checked on her brother. “He seems very calm; he’s very mellow, cool as ice,” she said, adding that she was feeling nervous for him. “We’re actually seeing his dream come alive,” she said. “And it’s a perfect day.”

The reunion drew other members of Abloh’s crew, including Don Crawley, cofounder of RSVP Gallery, who was in a pair of mismatched sneakers from the collection, with scrawled in a black marker, “Chicago, Michigan Ave.” It was a reference, he explained, to the Louis Vuitton store in Chicago, where he and Abloh are from.

“That’s the school; that’s where we learned about fashion. We bought so much stuff,” added Crawley, who’ll be previewing the latest collection from his own line, Just Don, in Paris this week. “It’s being pushed like it’s a new sports league. Everything’s about sport, but you’re going to see this perspective of sport nobody has done,” he said, giving Abloh’s father, Nee, a bear hug. “Proud dad and Mr. Abloh,” he said, presenting him to the crowd.

For Rita Ora, who had also already checked out the collection, the designs give “a whole new perspective of youth.”

“It’s really fun. Kim Jones [the former artistic director of Vuitton’s men’s line] is one of my dear friends and I’ll be back here for the Dior Homme show on Saturday, which will be amazing. It’s completely different and I think it’s fantastic,” she said. “It’s an incredible cultural moment in fashion — and I love that the show is outside.”

American footballer Victor Cruz, who said he’s working on a collaboration with a “French luxury sneaker brand” due out end of year, and is still working with Nike — “doing some footwear and maybe doing some apparel stuff with them” — also described the event as a huge deal. “For African-American history, first and foremost, and just to be here to witness what Virgil has done and what he is continuing to do,” said Cruz. “Then simply as a lover of clothes, everybody’s looking so good. And being part of a movement, part of something that’s bigger than fashion.”

“Stamp [of approval]. This is all Louis: shorts, shoes, harness,” said Luka Sabbat, dressed top-to-toe in pieces from the collection. “This is major history, five years ago me and Virgil were going to the VFiles showroom to check on how [Abloh’s label] Pyrex Vision was selling and now, literally a 200-meter runway — it’s insane. It’s a huge milestone for culture and youth.”

An emotional Abloh for his runway bow ran straight into the arms of media-shy West, who gave his own succinct verdict of the show. “Amazing.”